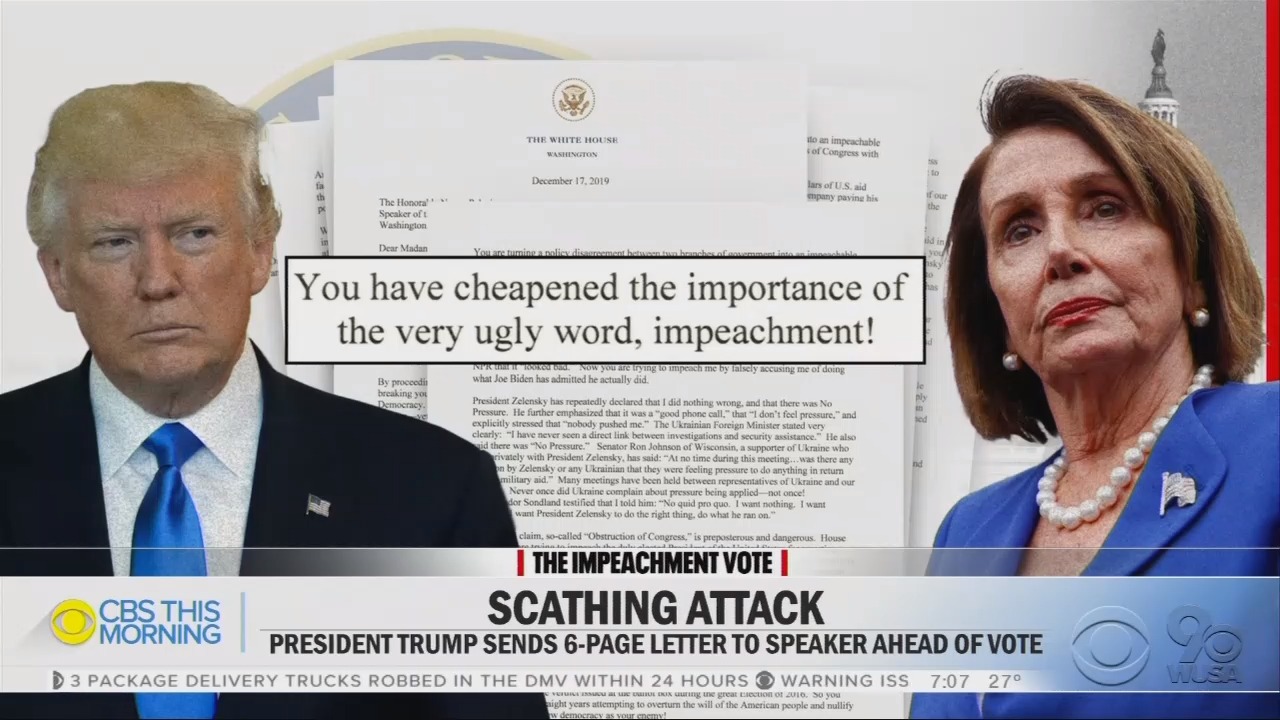 The New York Times was unhappy with Trump’s “6-Page Diatribe” Trump to Speaker Nancy Pelosi attacking her for the looming vote on his impeachment. A jump page to Wednesday’s lead story featured this text box: “A missive full of unproven charges that ignores the evidence.”

Another Wednesday story by Katie Rogers and Maggie Haberman didn’t win awards for objectivity either: “A Grievance-Laden Rant, for the Record, Written on White House Stationery.”

Fact-checker Linda Qiu also tackled what she called Trump’s “rambling and angry letter to Speaker Nancy Pelosi.” But in her rush to correct him point by point, several attacks fizzled.

Trump: Congressman Adam Schiff cheated and lied all the way up to the present day, even going so far as to fraudulently make up, out of thin air, my conversation with President Zelensky of Ukraine and read this fantasy language to Congress as though it were said by me.

Qiu: This is exaggerated. Mr. Trump is referring to comments Representative Adam B. Schiff, Democrat of California and the chairman of the House Intelligence Committee, made about the July 25 phone call between Mr. Trump and Mr. Zelenksy. In a congressional hearing in September, Mr. Schiff said he was conferring the "essence" of the conversation that was meant to be partially "parody." His account veered from the transcript in chronology and details at points, but it generally tracked with the transcript’s version of what Mr. Trump said on the call.

Seriously? A Schiff sample: "And I’m going to say this only seven times, so you better listen good. I want you to make up dirt on my political opponent, understand? Lots of dirt, on this and on that." That has no relation to what Trump actually said.

Qiu: This is exaggerated. The economy has added about 6.6 million jobs since February 2017, Mr. Trump's first full month in office.

Qiu unwisely challenged Trump’s accusation that his campaign was being spied on, and challenged his strong claim to having “been far tougher on Russia than President Obama ever even thought to be.” About the spying, Qiu responded:

False. A report from the Justice Department’s inspector general, released last week, contradicts this claim. The F.B.I. did not attempt to place informants or undercover agents inside the Trump campaign, the report said....

It was spying by any common understanding of the word.

Qiu swung and missed on Russia:

This is misleading. Whether Mr. Trump has been “tougher” than any other president is subjective. But it’s worth noting that observers of American relations with Russia point to a disconnect between aggressive policies enacted by the Trump administration and not-so-tough language from Mr. Trump himself. The administration has indeed imposed sanctions, ordered a missile attack on Syria despite Moscow’s opposition and approved arms sales to Ukraine. But Mr. Trump himself has repeatedly denied or played down Russia’s interference in the 2016 election, contradicting his own intelligence agencies.