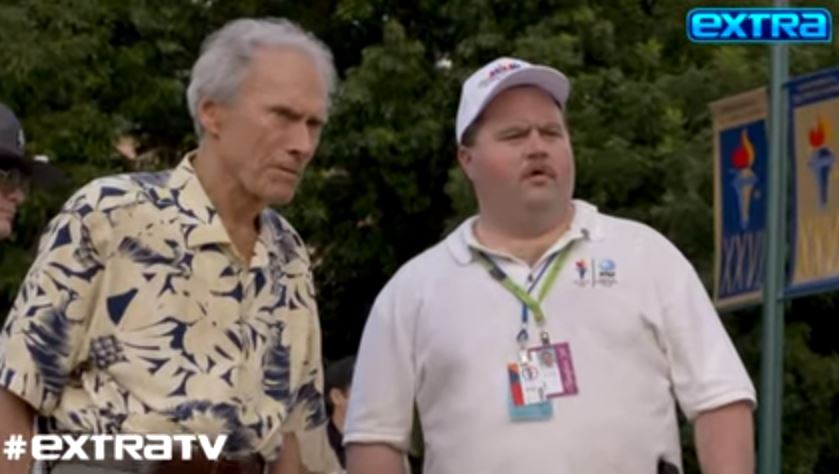 New York Times reporter Marc Tracy made the front of Friday’s Business section with a story on press outrage over the treatment of late Atlanta Journal-Constitution reporter Kathy Scruggs, in Richard Jewell, directed by Clint Eastwood, about the notorious Olympic bombing case.

The paper’s Facebook link to the story, headlined “Sex-for-Scoop Scene Rankles Press," emphasized an ageist crack against the 89-year-old, politically conservative actor/director, something one could hardly imagine happening to a liberal Hollywood legend.

Journalists are suddenly outraged over the common practice of Hollywood fictionalizing true stories by adding juicy details. Many movies have portrayed journalists as fictionally heroic without any complaints. But now that Eastwood is holding up irresponsible journalism in an unflattering light, the press is in full howl.

Clint Eastwood received a standing ovation on Tuesday when he was introduced by the Georgia House speaker, David Ralston, for the red-carpet premiere of Richard Jewell at the Rialto Center for the Arts in downtown Atlanta....

The reaction was a contrast to how the film was received Wednesday at a screening arranged by Cox Enterprises, the owner of The Atlanta Journal-Constitution, at a theater near the newspaper’s headquarters. During a scene in which a Journal-Constitution reporter is shown offering sex to an F.B.I. agent in exchange for information -- a scene the paper has called “false and defamatory” -- an audience member hissed.

The film shows Kathy Scruggs, a law enforcement reporter, sidling up to the F.B.I. agent at a bar days after a pipe bomb packed with nails had exploded at Centennial Olympic Park in the city’s downtown area, causing two deaths and injuring 111 people....

Tracy admits the movie “follows the standard practice for movies based on real-life events by taking liberties with certain facts....” Then he lets a source, Kelly McBride of the Poynter Institute, throw in ageist insults against Eastwood.

“I think Clint Eastwood is showing his age, frankly,” she added of the 89-year-old director.

Critics have noted that a film focused on a low point for law enforcement and the press was directed by a prominent conservative at a time when President Trump has vilified the F.B.I. as an arm of the so-called deep state and has repeatedly called the news media “the enemy of the people.”

Yet interestingly enough, in 2016 the paper sneered at those who would fact-check films based on true stories.

...the dreaded Oscar-season truth squad. Once again, confrontations between an expanding field of reality-based movies and a growing pack of watchdogs, mostly of the armchair variety, have been turning the annual awards ritual into a brutal game of ‘gotcha.’

“Movies that are not documentaries are works of fiction, whether or not they deal with real events...The only people dumb enough not to understand this are certified intellectuals -- journalists and college professors, mostly -- who need fodder for columns or something apparently important but actually trivial to wring their hands about.”