On Friday, New York Times entertainment reporters Michael Cieply and Brooks Barnes lamented “the dreaded Oscar-season truth squad. Once again, confrontations between an expanding field of reality-based movies and a growing pack of watchdogs, mostly of the armchair variety, have been turning the annual awards ritual into a brutal game of ‘gotcha.’”

To state their snobby thesis, Cieply and Barnes turn to a Times “co-chief movie critic” for a sneer in print:

“Movies that are not documentaries are works of fiction, whether or not they deal with real events,” A. O. Scott, the co-chief movie critic for The Times, said. “The only people dumb enough not to understand this are certified intellectuals — journalists and college professors, mostly — who need fodder for columns or something apparently important but actually trivial to wring their hands about.”

These men are trashing even their own "dumb" colleagues at the Times who have questioned the veracity of Sony's NFL-bashing film Concussion, starring Will Smith. It's somehow lamentable that allegedly small-minded people take exception when a movie script smears its way through history, as in Robert Redford glorifying disgraced CBS anchorman Dan Rather in Truth: 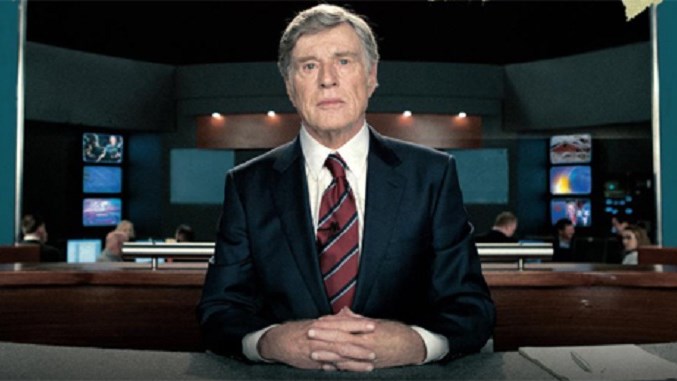 Yet movies that claim the truth are bound to be measured against it. “It’s astounding how little truth there is in Truth,” said the CBS spokesman Gil Schwartz, taking a shot at this season’s boldly titled film about his network and its handling of a disputed, and also much defended, 60 Minutes II story about George W. Bush.

And watchdogs, self-appointed and otherwise, with backing from an Internet full of facts (or approximations thereof), are also inspecting the underpinnings of films much more closely. Movie takedowns tend to generate a torrent of digital readership, especially when films touch on topics that are still the subject of heated debate. In some cases, the real-life counterparts are mobilizing the pushback; as dramatizations of real-world events surface more quickly, they see the personal stakes as enormous.

Dear Mike and Brooks: You, too, can be categorized as "armchair" critics and "self-appointed watchdogs." If you think you're flying a higher plane of arrogance, please recall the Times handling of their paper's fiasco with the habitual liarJayson Blair.

This duo thinks truthfulness in based-on-true-life movies is overrated. Why, they were stretching the facts in Pride of the Yankees with Gary Cooper back in the black-and-white era! True-life dramas are presented as a nicely different option compared to "brands" like Marvel and Lego and Superman and Star Wars:

But the film industry’s long history of taking liberties with true stories does not stop the sniping.

Eddie Redmayne played Lili Elbe as “crazy,” not as a real transgender person, in The Danish Girl, wrote Erica Keppler for The Huffington Post. Dalton Trumbo was too soft on dictators like Stalin and Hitler, or so said CNSnews.com in its vetting of Trumbo, an admiring look at that screenwriter’s battle with the Hollywood blacklist. No one shot out the windows of the lawyer James B. Donovan’s home, as shown in Bridge of Spies, according to Historyvshollywood.com, and Mr. Donovan, played by Tom Hanks, never saw would-be escapees being executed at the Berlin Wall.

The article at our sister site CNSNews.com was by Allan Ryskind, whose father Morrie Ryskind was a screenwriter like Trumbo during the Cold War, and who wrote the book Hollywood Traitors about Trumbo and other communists. But on the back of Friday's Weekend Arts I section (the one with this article on the front page) was a full-page ad for "The New York Times Film Club" (sponsored by HBO). It was illustrated by large picture of....Trumbo.