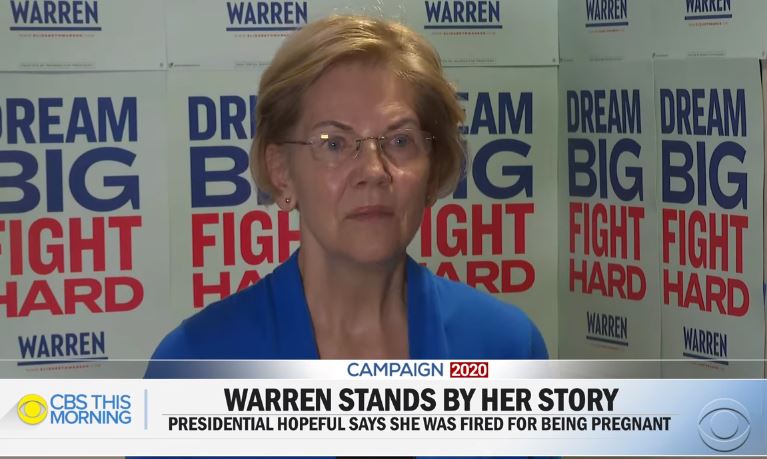 But he really raised his game in his Friday “news analysis” entitled, “As Warren Rises, Republicans Probe Her Biography for Points of Attack,” which was even more shameless in its feminist favoritism toward Warren. Kaplan hurled the “sexism” card at the GOP for daring to show Warren in a lie about the circumstances of her leaving a teaching position in 1971.The text box: “Looking to a tactic that is often used against women.”

Previously, Warren had claimed that she left the teaching job because of her insufficient educational qualifications. But more recently she has claimed she was fired for being pregnant. And minutes from a school board meeting indicate her contract was initially extended for another year.

The press may be fighting her corner so fiercely on this because the contradiction lies across an ideological faultline, with Warren’s new story about a pregnancy-motivated firing more amenable to the Democratic feminist view of the world than her original story, in which she shouldered the responsibility.

The cheerleading started in the lead.

Republicans have tried to brand her as a socialist, attack her policy ideas and portray her as too left-wing for the American electorate. None of those arguments have diminished her political momentum, robust fund-raising or polling.

The pathetic assumptions of Republican sexism rolled in by paragraph three. Notice how Kaplan goes for the two-for-one deal, defending the honor of both a potential Democratic female candidate (Warren) and the previous defeated one (Clinton).

But in the past week, conservative news sites have challenged Ms. Warren’s story... In doing so, Republicans employed a tactic -- questioning a female candidate’s authenticity -- that is at once often a sexist trope in politics and a strategy used against Hillary Clinton in 2016.

Ms. Warren and her team, in turn, have confidently parried those attacks and used them to rally supporters. Rather than take a defensive posture, Ms. Warren has responded by offering her personal story as one of countless instances of pregnancy discrimination that have occurred in American workplaces, where it remains a widespread problem....

Attacking authenticity has been a common strategy targeting women running for office for decades: Long before Mrs. Clinton, Geraldine Ferraro faced it in 1984, when she was the first woman to appear on a major party’s presidential ticket.

So...if something similar happened to someone else, then it happened to Warren, and Republicans are sexist for pointing out Warren’s own contradictions? What a bizarre chain of logic.