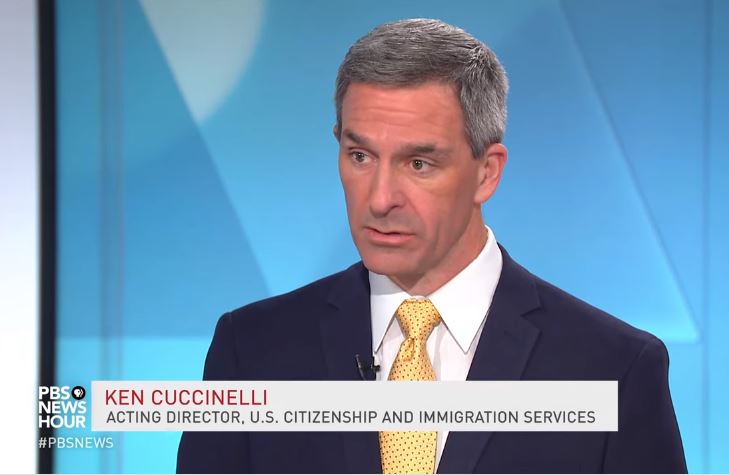 The press has targeted Ken Cuccinelli for a long time, both when he was a conservative Attorney General for Virginia and now that he oversees immigration policy in the Trump administration (his official title is Citizenship and Immigration Services Acting Director).

Loosening immigration is a major priority for the Times, so it’s no surprise they take their shot at Cuccinelli as well, in a large hit piece Friday.

Zolan Kanno-Youngs and Maggie Haberman reported “The Public Face of Homeland Security Also Ruffles Its Feathers. A Lot.” The text box was accusatory: “Aggressively pushing policies with little concern for legalities.” President Obama made many actually extra-legal moves without losing support in the news pages of the New York Times.

They pointed to Cuccinelli (then a senior adviser to Senator Ted Cruz) lacing then-candidate Trump for being hypocritical on immigration.

Three years later, the president and Mr. Cuccinelli have put aside their differences to make common cause in a pursuit of the fiercest anti-immigration agenda in generations. As the acting director of United States Citizenship and Immigration Services, Mr. Cuccinelli now oversees legal immigration, including the visa program that he once criticized and Mr. Trump made rich use of in staffing resorts such as Mar-a-Lago in Florida and the Trump National Golf Club in Bedminster, N.J.

From that seemingly narrow perch, he has roiled the Department of Homeland Security, peppering other senior officials with pointed email demands, encroaching on Immigration and Customs Enforcement operations and generally appointing himself spokesman for all things immigration in the Trump administration.

The reporters worked in a cheap jab to paint Cuccinelli as hypocritical on immigration.

Mr. Cuccinelli, a descendant of Italian immigrants who sought sanctuary at Ellis Island, was recruited initially as the administration’s immigration czar, with the broadest possible portfolio....

He has aggressively pushed immigration policies with little concern for legal constraints....

Signature Cuccinelli initiatives include efforts to speed up asylum screenings, to make it harder for children of some active service members born abroad to obtain citizenship and to force immigrants facing life-threatening health crises to return to their home countries (the administration recently announced that it would reconsider the last decision).

From the start, his political career -- he was a state senator from 2002 to 2010 before becoming Virginia’s attorney general -- was marked by his hard-line stand on immigration at a time when his home base, extending to parts of Fairfax County in the far suburbs of Washington, was divided by an influx of first-generation Americans....

He also displayed the acumen to carry out wide-reaching, complex policy.

A devout Catholic, Mr. Cuccinelli made his name nationally more as a social conservative than as an immigration hard-liner. He defended a Virginia law that criminalized sodomy, advocated prohibiting Virginia state universities from protecting same-sex couples from discrimination and investigated the University of Virginia to obtain documents related to the work of a scientist who studied climate change, accusing the professor of fraud. He issued edited pins of the state seal for his staff to wear with the exposed breast of a Roman goddess covered up.

His district was “beginning to see early in his term a substantial influx from people outside who looked different,” said Mark J. Rozell, the dean of the Schar School of Policy and Government at George Mason University in Virginia. “So there was some populist appeal to his taking a very hard immigration stance.

After that insinuation of racism, Kanno-Youngs and Haberman edged closer to it:

Mr. Cuccinelli’s allies say his positions are rooted in the belief that a legal immigration system is crucial to maintaining a functioning society. But Mr. Cuccinelli tends to tailor his views based on whether the legal immigrants in question are fleeing desperation south of the border or, like his ancestors, escaping Europe.