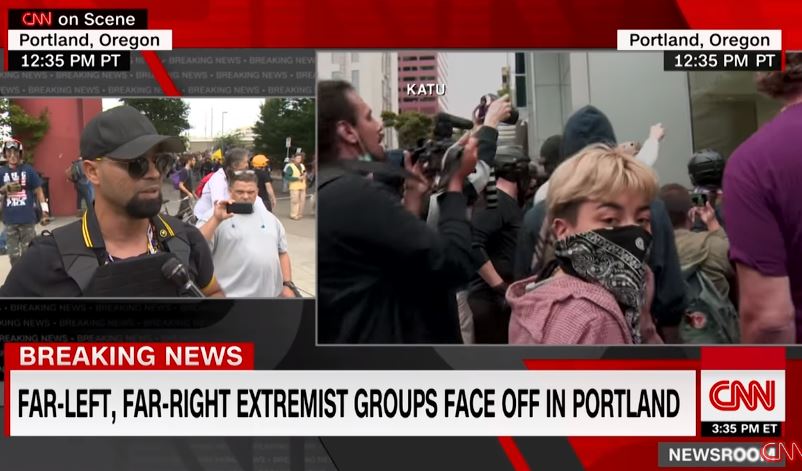 They blew it again: After the New York Times’s pathetic response to the violent left-wing protestors of Antifa assaulted conservative journalist Andy Ngo, the paper has apparently learned nothing.

Nicholas Fondacaro at Newsbusters filled us in on what the Times missed: “Throwing water bottles was arguably among the least of Antifa’s tactics. According to footage of their attacks, Antifa assaulted a bus filled with the ‘right-wing’ marchers (as they were trying to leave the event) and tried to beam people in the head with a hammer.”

Besides the whitewashing of the black-masked attackers, the labeling bias shown by the Times was stark, as the conservative protesters were given various appellations of “right” and “far right,” while the violent left-wingers, their identities hidden under masks, were given their preferred flattering description, “anti-fascist.” Not a single photograph of the black-masked protesters appeared to have made it into the paper, either in print or online.

About 1,200 people converged for a rally on Saturday at a waterfront park in Portland, Ore., where far-right groups faced off with anti-fascist counterprotesters and brought much of the downtown area to a standstill.

President Trump weighed in on the tense situation in Portland on Saturday morning, calling out the anti-fascist group known as Antifa on Twitter and suggesting support for designating it as a terror organization. He did not mention any of the right-wing groups, although both they and Antifa have a history of using violence against their opponents.

Many of the far-right demonstrators support a bill sponsored by Senator Bill Cassidy of Louisiana and Senator Ted Cruz of Texas, both Republicans, urging Congress to identify Antifa, short for anti-fascists, as a domestic terrorist group.

Even when the reporters admit that violence takes place against conservatives, Antifa isn’t labeled or even identified.

For weeks, the police and local politicians have been urging protesters not to show up at all, and those who inevitably arrive to be peaceful. Officials and residents feared a melee like one in the city on June 29, when a conservative writer was assaulted by black-clad protesters.

Some of the story’s slanted labeling has been tagged in bold below. In all, there were six “far right" labels in the text itself, plus one in the headline and one in a photo caption, compared to a single “left-wing” label in an online-only photo caption. That despite Antifa's obvious left-wing anarchist stance.

On Saturday, a few confrontations broke out in the park as the rally began, but the far-right groups eventually moved behind a police line and were separated from the counterprotesters by a wide gap that officers worked aggressively to maintain.

Later, many of the right-wing protesters left the area and crossed the nearby Hawthorne Bridge to the east side of the city. But some stayed on the west side, and Antifa members followed them through the downtown streets shouting at them to leave the city. At least two of those walking with the militia members appeared to have been hit with white substances resembling milkshakes.

Officials declined to discuss whether the people arrested -- on charges including disorderly conduct and unlawful use of a weapon -- were affiliated with right-wing groups or with Antifa.

Even when the ideological labels have merit, they underline the stark discrepancy of the coverage (none but flattering ones for the violent masked vandals of Antifa, which has a proven track record of violence).

A White House spokesman did not respond to an email seeking an explanation of Mr. Trump’s tweet, as well as why he chose to target Antifa and not others in the clashes.

Far-right groups congregated at the south end of the park on Saturday morning. Some wore body armor and helmets, and at least one had a visible pocketknife and pepper spray, which he said were to be used “as a last resort.”

The most vocal promoter of the rally was Mr. Biggs, who said he had organized the rally in response to the beating of the conservative writer Andy Ngo in the clashes in June.

The Times actually kept it an open question whether Antifa was responsible for the assault on Ngo, though there’s plenty of footage showing it.

Many have blamed Antifa for the beating, which was captured on video. No one has been charged in connection with the assault, which the police are continuing to investigate.