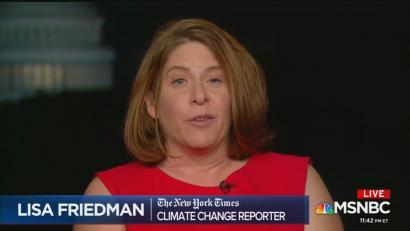 The New York Times is still trying to make concern over “climate change” happen within the GOP, this time hyping the threat climate denial poses to the party’s prospects. Lisa Friedman, New York Times “climate change” reporter and former editor of ClimateWire, made the front page Saturday with “Climate, Taboo In G.O.P., Eats At Party Youth.” The inside text box: “Strategists worry about chasing away the next generation.”

When election time comes next year, Will Galloway, a student and Republican youth leader at Clemson University, will look for candidates who are strong on the mainstream conservative causes he cares about most, including gun rights and opposing abortion.

But there is another issue high on his list of urgent concerns that is not on his party’s agenda: climate change.

“Climate change isn’t going to discriminate between red states and blue states, so red-state actors have to start engaging on these issues,” said Mr. Galloway, 19, who is heading into his sophomore year and is chairman of the South Carolina Federation of College Republicans. “But we haven’t been. We’ve completely ceded them to the left.”

While Donald Trump has led the Republican Party far down the road of denying the scientific consensus of human-caused climate change, Mr. Galloway represents a concern among younger Republicans that has caught the attention of Republican strategists.

In conversations with 10 G.O.P. analysts, consultants and activists, all said they were acutely aware of the rising influence of young voters like Mr. Galloway, who in their lifetimes haven’t seen a single month of colder-than-average temperatures globally, and who call climate change a top priority. Those strategists said lawmakers were aware, too, but few were taking action.

President Trump has set the tone for Republicans by deriding climate change, using White House resources to undermine science and avoiding even uttering the phrase....

Of course the phrase that now is rarely uttered is “global warming,” now “climate change” is a catch-all for any weird weather event the left wants to blame on human action/capitalism.

That, several strategists warned, means the party stands to lose voters to Democrats in 2020 and beyond -- a prospect they said was particularly worrisome in swing districts that Republicans must win to recapture a majority in the House of Representatives.

The polling bears out Mr. Heye’s prediction of a backlash. Nearly 60 percent of Republicans between the ages of 23 and 38 say that climate change is having an effect on the United States, and 36 percent believe humans are the cause. That’s about double the numbers of Republicans over age 52.

“He gets to set the national platform,” Joseph Majkut, director of climate policy at the Niskanen Center, a center-right research organization, said of Mr. Trump. But, he noted, “Every year that goes by, where people are going about their lives as if greenhouse gas emissions are a matter of very small concern, we make the problem worse for ourselves.”

That “center-right” label is a debatable appellation when applied to the Niskanen Center.

In other news, North Carolina can get hot in July:

Mr. Trump’s core supporters say they’re not worried. Standing in the sweltering heat outside East Carolina University in Greenville, N.C., last month as he waited for entry into a rally led by the president, Trey Bagley, 25, readily acknowledged climate science. But Mr. Bagley, a sergeant in the Marine Corps Reserves wearing a “Trump 2020, Make Liberals Cry Again” shirt said that did not make him a Democrat.

There was a brief admission that although climate change may be on the list of concerns, it’s not at the top:

He said climate change is hardly a top-tier topic among even moderate Republicans. But he noted it is a key differential issue in swing districts that can either help a candidate win young, college educated and female voters, or lose them.

Scott Jennings, a Republican consultant and a former campaign adviser to Senator Mitch McConnell of Kentucky, said 2020 candidates in different states would take various approaches to climate change, but he predicted that most would focus on simply attacking Democrats and the Green New Deal.

Still, he said, “Someday Republicans are going to have to come up with some proposals that are responsive to these issues and, frankly, be more reasonable and more thoughtful.”

Friedman has a history of journalistic activism on the environment. Her May 2019 article had a similar theme of Republicans reluctantly embracing the supposed reality of human-caused “climate change,” “In Shift for Republicans, Some Point to Climate When Proposing Policy,” contained Greenpeace-worthy lines like “Of course, climate denial is also alive and well among Republicans.”