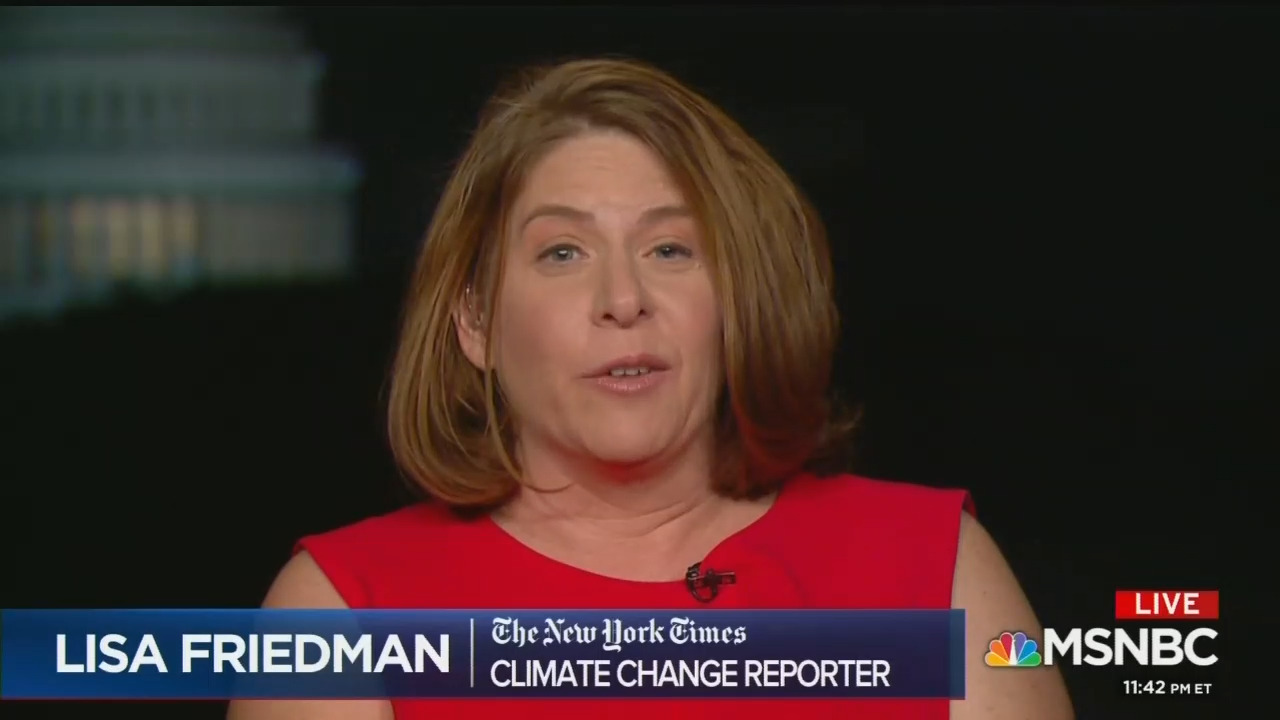 In Wednesday’s New York Times, reporter Lisa Friedman performed if not quite a victory lap, then a victory jog, while reporting that some Republicans in Congress are seeing the light and voicing concern about climate change albeit for cynical political reasons: “In Shift for Republicans, Some Point to Climate When Proposing Policy.” The text box hyped: “A subtle change in tone as more voters favor taking action.”

Voters have allegedly been saying that for years, but “climate change” has always ranked low on lists of voter priorities.

Friedman, the former editor of ClimateWire, took the activist mindset throughout, taking on the mantle of former reporter-activist Justin Gillis (click “expand”):

When John Barrasso, a Republican from oil and uranium-rich Wyoming who has spent years blocking climate change legislation, introduced a bill this year to promote nuclear energy, he added a twist: a desire to tackle global warming.

Mr. Barrasso’s remarks -- “If we are serious about climate change, we must be serious about expanding our use of nuclear energy” -- were hardly a clarion call to action. Still they were highly unusual for the lawmaker who, despite decades of support for nuclear power and other policies that would reduce planet-warming emissions, has until recently avoided talking about them in the context of climate change.

The comments represent an important shift among Republicans in Congress. Driven by polls showing that voters in both parties -- particularly younger Americans -- are increasingly concerned about a warming planet, and prodded by the new Democratic majority in the House shining a spotlight on the issue, a growing number of Republicans are now openly discussing climate change and proposing what they call conservative solutions.

“Denying the basic existence of climate change is no longer a credible position,” said Whit Ayers, a Republican political consultant, pointing out the growing climate concern among millennials as well as centrist voters -- two groups the G.O.P. will need in the future.

It is at least partly opportunism, given that some lawmakers are simply reframing longstanding policies or priorities as “climate” policy. Still it is a significant shift, indicating that at least a few prominent Republicans see an advantage to breaking from right-wing orthodoxy that has long dismissed or openly derided concerns about the climate.

But Republicans also are walking a tightrope. In the Trump administration, G.O.P. orthodoxy has shifted strongly toward denying or dismissing the threat of climate change. Veering away from it could cause a lawmaker to lose campaign contributions and key political support.

In almost all of the cases in which conservative politicians are cautiously staking out territory on climate change, they still do not acknowledge the extent of man’s responsibility for causing it. Putting a price on emitting carbon into the atmosphere is verboten. And they insist solutions do not need to include eliminating or even curbing the use of oil, coal and other dirty energy sources primarily responsible for heating the planet.

The Green New Deal has played a role as well. The nonbinding congressional resolution calling for a 10-year mobilization to end fossil fuel use has unified Republicans against it. But the attention paid to it also has forced Republicans to offer their own solutions.

Friedman’s praise for the Green New Deal is predictable, given her take in February when she went easy on the wacky proposal, even depicting it as a modest document, with “signs of concessions to moderate Democrats and Republicans interested in working on clean energy issues.”

Then came a line straight out of a Greenpeace pamphlet:

Of course, climate denial is also alive and well among Republicans.

How does one go about denying that climate exists?

President Trump, who routinely mocks climate science, is preparing to announce a federal advisory panel to cast doubt on the overwhelming body of evidence that climate change is a threat. At a recent hearing at which former Secretary of State John Kerry testified on climate change, Representative Tom Massie, a Kentucky Republican, floated long-debunked theories that offer alternative explanations for warming other than human activity.