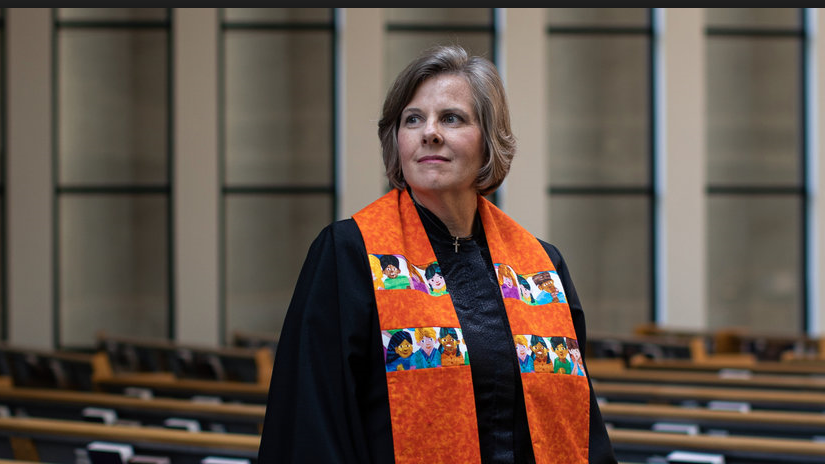 More strange new respect for religion in Monday’s New York Times, for “America’s First Gun Violence Minister.” What sounds like an idea for a satirical Babylon Bee story is in fact a prominently placed interview in the lead National section of the paper of record: Reporter Adeel Hassan, whose work “focuses on identity and discrimination,” reporting from Texas for “A Ministry Pushing Beyond ‘Thoughts and Prayers.’”

The headline itself is a jab at a popular religious response to national tragedy, and so is the online deck of headlines: “‘Thoughts and Prayers’ Aren’t Enough, America’s First Gun Violence Minister Says. The saying 'has been co-opted by the gun lobby to keep the church from taking action,” the Rev. Deanna Hollas said.'" [Photo credit: New York Times]

When the topic is gun control, you know there will be no journalistic pushback from the paper at all, not even a “left-wing” or “liberal” label to be found from the reporter:

To the strains of the hymn “If We Just Talk of Thoughts and Prayers,” the largest Presbyterian denomination in the United States ordained The Rev. Deanna Hollas as its first minister of gun violence prevention this month.

Ms. Hollas is believed to be the first person in the country to be given a national ecclesiastical role of this kind. And the choice of the hymn was a deliberate underlining of what she sees as a desperate need: to do more than react to the latest mass shooting with an offer of benedictions. That, she said, is not sufficient in a country where 40,000 people are killed by guns each year.

“The saying ‘thoughts and prayers’ has been co-opted by the gun lobby to keep the church from taking action so they can increase their profits,” Ms. Hollas, who was installed in her new role by the Presbyterian Church (U.S.A.) earlier this month, said in a recent interview....

A Texas native who describes herself as “no stranger” to gun culture, Ms. Hollas, 52, said she was committed to ensuring that Americans from all sides of the gun debate stop talking past one another. “No matter where you fall on this issue,” she said, “the important thing is that we remain in conversation with one another.”

We asked her about her role, and what she hoped to accomplish...

There was nothing remotely resembling a challenging question in this whole full-page interview, which could have been easily served up by a gun-control website (and kind of was a couple of days ago). All the while, Hollas made confident claims that she could connect to gun owners and knew gun culture well, all the while demonizing the National Rifle Association.

What is your background? And what makes you ready for this role?

What exactly will you do in your new role?

Do you expect to face resistance?

Do you feel daunted at all?

The church has always been political -- Jesus was executed by the government for speaking against its violence and against the religious authorities that aligned themselves with this unjust system. That is still the role of the church today: to speak a word of peace into a world of violence.

What can other church congregations do?

Why do you remain hopeful?

Hollas responded to that last question, in part:

I entered seminary thinking I would just take two classes and get my diploma in the art of spiritual direction and that would be it. But God kept leading me toward ordained ministry, which didn’t make much sense at the time as I didn’t feel called to lead a congregation.

In fact, I was thinking about withdrawing my candidacy for ordination when the N.R.A. came to Dallas last year for their annual convention....

It’s hard to imagine the Times taking at face value a conservative figure who claimed that God had led him or her to be an activist on, say, preventing abortion.