NY Times Perked Up in the PM: Democrats ‘Painted' Trump as 'Risk to the Nation’

Wednesday was Mueller Day on Capitol Hill. For seven hours the special counsel provided testimony before the House Judiciary Committee and the House Intelligence Committee, carried live for those Americans still interested in his completed investigation into Russian meddling in the U.S. electoral process in 2016.

The New York Times, which hedged its bets about the impact of Mueller’s testimony in the days leading up to Mueller Day, launched its coverage by devoting the entire front of Wednesday’s National section to “19 Questions for Mueller Ahead Of His Testimony to Congress,” by Mikayla Bouchard and Rebecca Lieberman.

None of those19 questions cast any doubt about the investigation, like the dossier, or the anti-Trump texts exchanged by two former F.B.I. officials, Peter Strzok and Lisa Page, who helped start up the investigation into the Trump campaign, or the dubious, unsubstantiated Trump-sliming dossier.

The “Washington Memo” by Peter Baker and Sheryl Gay Stolberg, “Hearings Likely to Turn Heads, but Not Change Minds,” earned a half-point for a clever lead, but slanted toward the Democratic side. 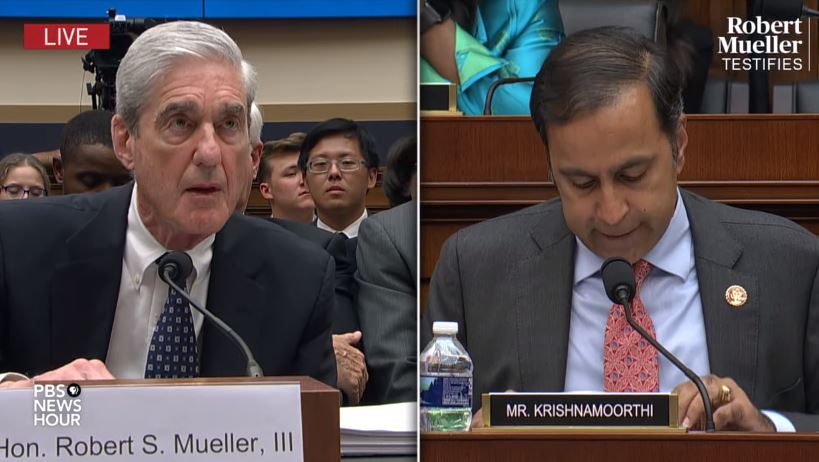 After all the swearing at, finally comes the swearing in. When Robert S. Mueller III takes the oath on Wednesday morning in the wood-paneled Room 2141 of the Rayburn House Office Building, he will answer questions for the first time since opening his special counsel investigation into President Trump and Russia more than two years ago.

But for all the anticipation, for all the fighting that it took to get to this day, many in Washington assume it will be more fizzle than sizzle. Mr. Mueller, the famously stoic prosecutor and reluctant witness, has vowed to adhere strictly to the words of his 448-page report and no more, making it unlikely that he will serve as the dramatic accuser Mr. Trump’s critics yearn to see.

That is not to say it will be free of fireworks. Democrats will use Mr. Mueller to argue that Mr. Trump benefited from Russia’s help in the 2016 election even if investigators did not establish a criminal conspiracy and that his efforts to impede the investigation amounted to obstruction of justice even if Justice Department rules bar indictment of a sitting president. Republicans will grill the former special counsel to press their case that the entire investigation represented an illegitimate, partisan coup attempt even though Mr. Mueller himself is a lifelong Republican.

Mr. Mueller may be compelling simply by virtue of his just-the-facts credibility after two years of near silence. The real question, however, is whether it changes anyone’s mind in a highly polarized country that has already digested Mr. Mueller’s findings and dug in on its conflicting views of Mr. Trump and his guilt or innocence.

For their part, Republicans on Tuesday took on their best nothing-to-see-here demeanor, dutifully repeating the party’s Americans-have-moved-on talking points.

....And if Washington veterans were jaded about the hearings, Democrats were gambling that it would take only one or two viral video clips to engage the public.

The Times did some real shoe-leather reporting that supported the Democratic cause:

A completely unscientific survey of out-of-town diners in a House cafeteria on Tuesday suggested the potential. Most were in Washington to lobby lawmakers, meaning they keep a closer eye on events in the Capitol than many Americans.

Democrats believe Mr. Mueller’s report has all they need to bring a case against the president -- if only they can get Americans to pay attention. Think of their strategy on Wednesday less as fact-finding than moviemaking, meant to bring the special counsel’s dense report to life on national television.

The New York Times even provided live play-by-play coverage, with several reporters commenting on the testimony and questions from Democratic and Republican members of the two committees.

Justice reporter Katie Benner betrayed some bias at 10:03 AM: “...If the Republicans are smart, they’ll use the remainder of their time to air conservative conspiracy theories and to attack the special counsel’s office, now knowing that Mueller will not in any way push back.”

A rare if defensive admission came from reporter Noah Weiland at 11:46 a.m.: “As conspiratorial as it might sound, this is a worthy line of questioning that Mueller has never addressed. It’s simply true that Mueller hired a lot of prosecutors with records of donations to Democrats. Mueller cannot just assume that your ordinary viewer will be sympathetic to the idea that a prosecutor checks his or her politics at the door....”

Then it was back to Democrat-defending conventional wisdom. Michael Schmidt at 11:51 a.m.: “Fact check: Johnson says there were no Republicans on Mueller’s team. Mueller is a lifelong Republican.” He said "Mueller's team," not Mueller, but Katie Benner quickly agreed: “Good point!”

Schmidt at 1:04 p.m.: “Nunes is desperately trying to portray Mueller, the F.B.I., the Democrats and the media as working together to take down the president.”

Where could Nunes have gotten that idea?

Congressional Correspondent Nicholas Fandos saw the Republicans winning at 2:41 p.m.: “Obviously both sides are going to view what they want in this hearing. But Republicans on Capitol Hill do seem ready this afternoon to spike the football. They are thrilled with how today has gone.”

But by 3:29 p.m. Fandos saw the tide turn: “I wonder if you all agree with me, but it felt like this afternoon hearing was much less effective for Republicans and more so for Democrats. They painted an urgent picture of a president and the aides around him as a risk to the nation.”

Just like the Democrats and the press have been doing for years.