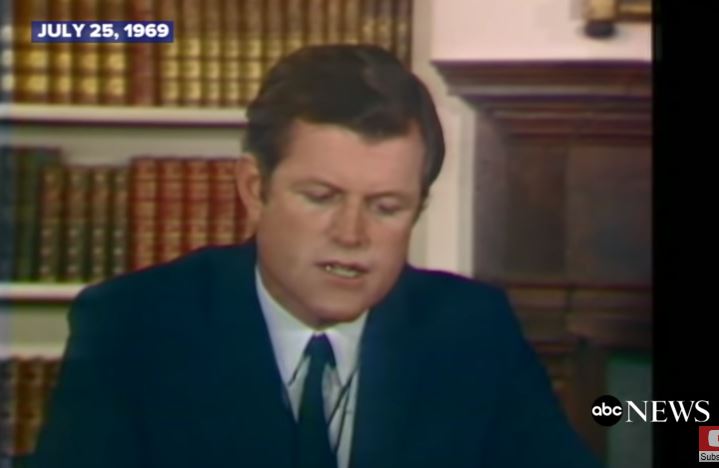 For Fast Company’s run-up to the 50th anniversary of the moon landing, the magazine's Charles Fishman dove into the contemporaneous coverage from July 1969, focusing on how the print media reporting on “liberal lion” Sen. Ted Kennedy driving off a bridge on Chappaquiddick Island that killed his passenger was overshadowed by the moon landing the next day. But is that a proper excuse for the lack of intensity? “Lost to history: The convergence of the first Moon landing and Chappaquiddick -- Why don’t we remember it that way?”

Media watchdogs have their own explanation of why people don’t necessarily link Chappaquiddick with memories of the moon landing (liberal bias), but Fishman has some interesting research into how that extraordinary event may have affected initial coverage of Kennedy’s car crash and the resulting death by drowning of his companion, Mary Joe Kopechne.

Fishman didn’t address the possibility of ideological slant factoring into the relatively modest coverage of the Kennedy event, putting it down to a coincidence of timing, with the bigger news of the moon landing shoving aside the incident on Chappaquiddick:

One of the biggest political events of the late 1960s happened right in the middle of the first Moon landing -- and it would have been a lot bigger story if it hadn’t been overshadowed by Apollo 11.

Unlike many in the media both then and now, Fishman got the order of importance correct, leading with Kopechne’s death and then addressing the alleged damage it did to Ted Kennedy’s political aspirations.

The event has long since become known by the single word “Chappaquiddick,” the harrowing car accident on the island of Martha’s Vineyard, which killed Mary Jo Kopechne, a 28-year-old political staffer devoted to Robert Kennedy and which shattered the political career of Massachusetts Sen. Edward Kennedy, who was at that point the last living Kennedy brother of his generation, and the man widely anticipated to challenge President Richard Nixon’s re-election in 1972.

After the crash, Kopechne drowned while Kennedy waited 10 hours before reporting the accident and failed to summon help after he was able to swim to safety.

Fishman said the story “burst onto the front pages of newspapers across America on the morning of July 20, 1969. That was the day that astronauts Neil Armstrong and Buzz Aldrin were scheduled to set foot on the Moon.”

President John F. Kennedy’s leadership on the issue was noted. Then Fishman dug into the coverage (click “expand”):

The blending of the Moon landings that had turned into a tribute to his brother, with the coverage of his own scandal, was impossible to avoid -- or to resist. Chappaquiddick got much less coverage -- and much less dramatic coverage -- because of Apollo 11, which became clear only after the astronauts returned safely to Earth.

On July 20, 1969, the New York Times and the Washington Post had nearly identical Sunday front pages. Banner headlines announcing the arrival of the Moon landing, with the Chappaquiddick story tucked immediately under the Moon headline, prominently on the upper left. “Woman Passenger Killed, Kennedy Escapes in Crash,” the Times wrote. “Kennedy Passenger Dies in Car Plunge,” wrote the Post.

But on the second day after the scandal broke, on what should have been the day when enterprising reporters started to tease apart the contradictions and mysteries in Kennedy’s statements and behavior, the story all but disappeared. The front pages of the Monday Times and Post were devoted completely to the Moon landing, understandably. Chappaquiddick had been banished to inside pages, but in both the Times and the Boston Globe, you had to search for the Ted Kennedy story. The Times devoted its entire Monday A-section to the Moon landing --16 full pages of coverage. Chappaquiddick got a single column headline on page 19, “Kennedy To Face Charge in Crash of Leaving Site.”....The Post gave Chappaquddick most of page A3, with the headline, “Kennedy Is Held Blameless By D.A.”

Eight days later, with the astronauts safely back home, the Times and Post again featured Kennedy prominently on their front pages.

One doubts Time magazine’s cavalier treatment would pass muster in these #MeToo days:

Time magazine had done a cover story on Kennedy’s growing power and influence in January 1969: “The Ascent of Ted Kennedy” was the headline. Time did a second cover story that year on Kennedy, the week after the magazine’s Moon landing cover story, two weeks after Chappaquiddick. Kennedy was in a photograph on the cover of the August 1, 1969, issue, looking grim in the odd neck brace that he wore to the funeral of Mary Jo Kopechne. The headline: “The Kennedy Debacle: A Girl Dead, A Career in Jeopardy.” The story said that “the Kennedy debacle became a topic of more interest in much of Washington and elsewhere in the country than man’s landing on the Moon.”

That dismissive and protective attitude toward Kennedy’s despicable behavior hasn’t disappeared from today’s media, as rounded up by NewsBusters's Scott Whitlock. Another example: In April 2018, left-wing media critic Neil Gabler (who is, surely coincidentally, also writing a book on Ted Kennedy) got into The New York Times with a fact-free pan of the 2018 movie made about the event: "'Chappaquiddick' Is Bad History."