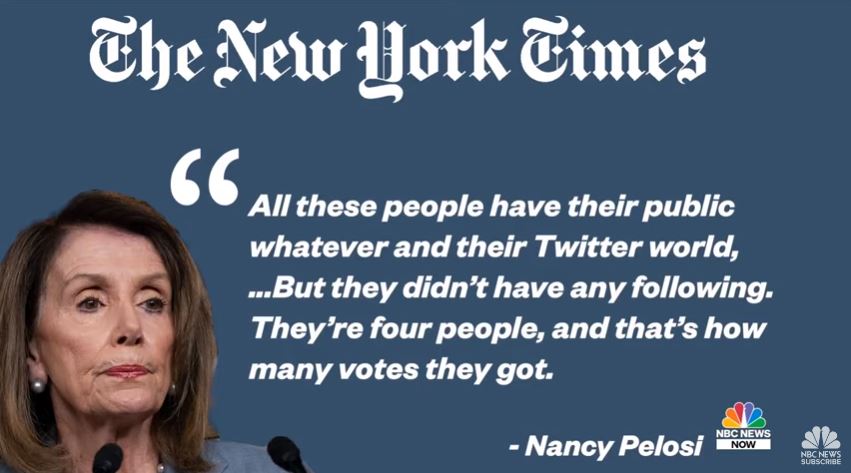 Is Alexandria Ocasio-Cortez’s press honeymoon over? No, but a few hints in the New York Times in the last week suggest the ardor has cooled.

It's always fun to read New York Times columnist Maureen Dowd turn her acid pen to the left on occasion -- and the touchy comments that followed her fierce chiding of Ocasio-Cortez in today’s edition, “Scaling Wokeback Mountain,” demonstrate that progressives are unused to and unprepared for mainstream media criticism of their acolytes.

Dowd is still recovering from the reaction to her previous Sunday column, an attention-grabbing interview with House Speaker Nancy Pelosi, in which Dowd pressed Pelosi over accounts of her feuding with “the Squad” of new liberal congresswomen, including Alexandria Ocasio-Cortez, Ilhan Omar, and Rashida Tlaib. Pelosi caused an intra-party spat when she responded: “All these people have their public whatever and their Twitter world. But they didn’t have any following. They’re four people and that’s how many votes they got [for opposing the border assistance package that passed last month].

Dowd set the scene on Sunday:

Alexandria Ocasio-Cortez ensorcelled me from the start. I loved the bartender-makes-good Cinderella story, the shake-up-the-capital idealistic dreams, the bravado about how the plutocrat president from Queens wouldn’t know how to deal with a Puerto Rican girl from the Bronx.

And I imagined the most potent feminist partnership in American history: Nancy Pelosi as sensei, bringing her inside game, and A.O.C., the Karate Kid with a wicked Twitter game.

But instead, the 79-year-old speaker and the 29-year-old freshman are trapped in a generational and ideological tangle that poses a real threat to the Democrats’ ability to beat Donald Trump next year.

Pelosi told me, after the A.O.C. Squad voted against the House’s version of the border bill and trashed the moderates -- the very people who provided the Democrats the majority -- that the Squad was four people with four votes. She was talking about a legislative reality. If it was a knock, it was for abandoning the party.

That did not merit A.O.C.’s outrageous accusation that Pelosi was targeting “newly elected women of color.” She slimed the speaker, who has spent her life fighting for the downtrodden and who was instrumental in getting the first African-American president elected and passing his agenda against all odds, as a sexist and a racist.

Dowd sounded positively conservative at times in her quotable column.

The young lawmaker went further, implying that the speaker was putting the Squad in danger, asking why Pelosi would criticize them, “knowing the amount of death threats” and attention they get. Huh?

A.O.C. pulled back and said she wasn’t calling Pelosi a racist. But once you start that ball rolling, it’s hard to stop....

And then there’s the real instigator, Saikat Chakrabarti, A.O.C.’s 33-year-old chief of staff, who co-founded Justice Democrats and Brand New Congress, both of which recruited progressives -- including A.O.C. -- to run against moderates in Democratic primaries....

Dowd again said things that conservatives could nod along in agreement to and which  would give progressives heartburn.

The progressives act as though anyone who dares disagree with them is bad. Not wrong, but bad, guilty of some human failing, some impurity that is a moral evil that justifies their venom.

Chakrabarti sent shock waves through the Democratic caucus when he posted a tweet about the border bill comparing moderate and Blue Dog Democrats -- some of whom are black -- to Southern segregationists in the ’40s.

Rahm Emanuel told me Chakrabarti is “a snot-nosed punk” who has no idea about the battle scars Pelosi bears from the liberal fights she has led.

In the age of Trump, there is no more stupid proposition than that Nancy Pelosi is the problem. If A.O.C. and her Pygmalions and acolytes decide that burning down the House is more important than deposing Trump, they will be left with a racist backward president and the emotional satisfaction of their own purity.

Times reporter Catie Edmondson also produced a surprisingly tough explainer (online only) on Ocasio-Cortez’s controversial chief of staff Saikat Chakrabarti. He started a rancorous interparty back-and-forth by hurling accusations of racism at other Democrats over Twitter. Put them together, and you have at least a pause in the media’s coronation of Rep. Ocasio-Cortez as the new Democratic hope.