One of the graphics shows a major swerve to the left by the Democrats since 2008 and a winding, back-and-forth curve for the Republicans during the same period. But that leftward Dem shift is downplayed in his text, in favor of the story’s intended takeaway of the Republicans careening toward the nutty European “far right.” 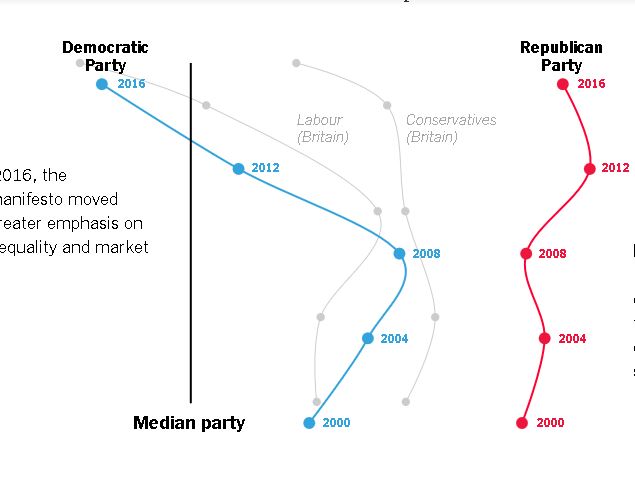 The text began with that bias in emphasis:

The Republican Party leans much farther right than most traditional conservative parties in Western Europe and Canada, according to an analysis of their election manifestos. It is more extreme than Britain’s Independence Party and France’s National Rally (formerly the National Front), which some consider far-right populist parties. The Democratic Party, in contrast, is positioned closer to mainstream liberal parties.

It was based on a textual analysis of election manifestoes issued by various political parties around the world, as interpreted by the Manifesto Project, based in Berlin.

The graphics and text are credited to Sahil Chinoy, graphics editor for the Times, with contributing analysis by Will Lowe, a political scientist at Princeton.

According to its 2016 manifesto, the Republican Party lies far from the Conservative Party in Britain and the Christian Democratic Union in Germany -- mainstream right-leaning parties -- and closer to far-right parties like Alternative for Germany, whose platform contains plainly xenophobic, anti-Muslim statements.

The Republican platform does not include the same bigoted policies, and its score is pushed to the right because of its emphasis on traditional morality and a “national way of life.” Still, the party shares a “nativist, working-class populism” with the European far right....

The difference is that in Europe, far-right populist parties are often an alternative to the mainstream. In the United States, the Republican Party is the mainstream.

The Times practiced guilt by association, not only shrugging off a politicized prosecution of a right-wing politician in France, but using that attack to make President Trump seem radical.

The situation predates the current administration, Mr. Greven said. While we could analyze Republican manifestos only through the 2016 election, since then, President Trump has openly expressed approval for politicians like Marine Le Pen, the far-right leader of France’s National Rally, who was recently ordered to stand trial for posting pictures on Twitter of killings by the Islamic State.

The story included the subhead, “A Closer Look at the Far Right” in Europe. Spreading guilt by association, underneath were listed eight proposals favored by various hard-right European parties, foreign to the Republican Party, such as: “Proposed Muslim-only prisons” and “Wants to shut down mosques.”

There are plenty of hard-left European parties that have Communist sympathies, that favor control of the means of production, open borders, and market-killing “green” economics. Yet for some reason, only proposals from “far right” parties were given a warning list, drumming home the idea that the American Republican Party had moved dangerously far right, when in fact it’s the Democratic Party that has swerved so far left it is now comfortably at home among the left-wing parties of Europe:

The Democrats fall closer to mainstream left and center-left parties in other countries, like the Social Democratic Party in Germany and Britain’s Labour Party, according to their manifestos’ scores.

And the United States’ political center of gravity is to the right of other countries’, partly because of the lack of a serious left-wing party. Between 2000 and 2012, the Democratic manifestos were to the right of the median party platform. The party has moved left but is still much closer to the center than the Republicans.

The Daily Caller picked up on the slant, under the headline “NYT Editor Made A Graph Showing The Democrats Pivote  Far-Left. He Used It To Call Republicans Far-Right.”