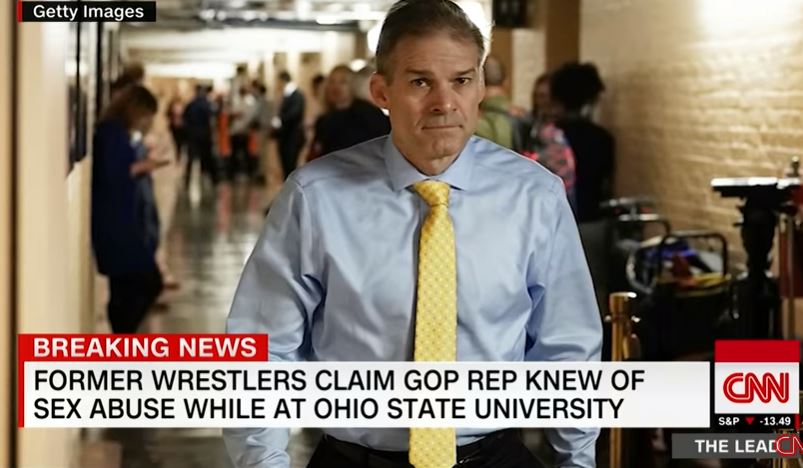 Reporter Catie Edmondson sounded rather perturbed that an investigation into sexual abuse of dozens of members of the wrestling program at Ohio State University by Dr. Richard Strauss failed to condemn conservative Rep. Jim Jordan, who served as an assistant wrestling coach with the program during part of the time period under investigation. She didn’t seem to appreciate Jordan's “Trumpian” insistence on his innocence in her Monday’s New York Times piece from Urbana, Ohio, “Constituents Back Jordan After Report on the Ohio State Scandal.”

Well, why wouldn’t they? The report didn’t condemn Jordan. Edmondson did her best to stir up controversy anyway, doling out hints of small-town conservative hypocrisy in snarky fashion.

Voters in this small town, a camera-ready county seat cut from the mold of a 1960s-era television set, believe in their congressman. Representative Jim Jordan calls this home, and his fellow Urbanans believe he is a man of integrity. They believe his family, a dynasty of wrestling icons, has served the community well.

And whatever questions may linger about what he knew and what he could have done while a team doctor sexually abused Ohio State University wrestlers under his supervision, they are prepared to give him the benefit of the doubt.

Ohio State, less than an hour from here, is a religion in central Ohio, but Mr. Jordan, a pugilistic conservative and Trump attack dog in perpetual shirt sleeves, is an institution. Constituents here have watched with anguish as Mr. Jordan has become ensnared in the sexual abuse scandal, which gained new life last month when a 182-page report released by the university said dozens of coaches acknowledged that rumors of the doctor’s predatory behavior were rife.

Five wrestlers who worked with Mr. Jordan in the late 1980s and early 1990s came forward last summer to say that the congressman knew of Dr. Richard H. Strauss’s abuse, which included ogling athletes while they showered and fondling their genitals under the guise of medical treatment. One wrestler, Dunyasha Yetts, said that Mr. Jordan on one occasion confronted the doctor with the team’s head coach about being too “hands on” with the students, and on a second occasion disregarded a comment that he had made about the doctor’s inappropriate behavior. That second episode was corroborated by two other wrestlers who witnessed it.

But while Mr. Jordan’s legion of partisan enemies derisively adopt the new nickname “Gym,” his impassioned self-defense -- a vehement and outright denial that he knew of any hint of misconduct -- has stuck with the people who matter most: his voters.

His conservative constituents, by dint of the gerrymandered contours of his district, were all but predestined to support him....

If the residents of Urbana see themselves as a modern-day Mayberry, then many have built up Mr. Jordan as their morally unimpeachable sheriff.

Perhaps unwittingly, Ms. Schafer was reciting an argument Mr. Jordan himself offered when he first stared down accusations that he turned a blind eye to the abuse, arguing that he was a victim of “deep state” liberal bureaucrats embedded in the government.

Last summer, as accusations mounted in the middle of Mr. Jordan’s re-election campaign, his Democratic challenger, Janet Garrett, had weighed whether to attack him on his involvement in the scandal. But the university’s report had not yet come out, and the campaign’s internal polling reflected Ms. Schafer’s apprehension. Voters were “not very convinced by the scandal,” Ms. Garrett’s former campaign manager, Zach Stepp, said in an interview.

This part was awfully cynical:

Edmondson used “Trumpian” as an expletive and tried to make a parallel to suggest Jordan wasn't out of the woods just yet.

In Trumpian fashion, however, Mr. Jordan declared that the report exonerated him, just as he and the president declared the Mueller report had given Mr. Trump the all clear. And even in Urbana, the largest city in the district closest to the university, the findings of the report and the extent of the scandal, blasted on national cable channels, has yet to fully seep in.

Edmondson far prefers intellectual Obamaoids in Congress who “heed the call to service.”

When it comes to scandals, she has previously played political favorites. After the House Ethics Committee reprimanded former Democrat Rep. Ruben Kihuen (accused of sexual harassment) along with Republican Rep. Mark Meadows (for his handling of sexual harassment by an aide), her report focused on Republican Meadows, who did not harass anyone, rather than the Democrat, who did.