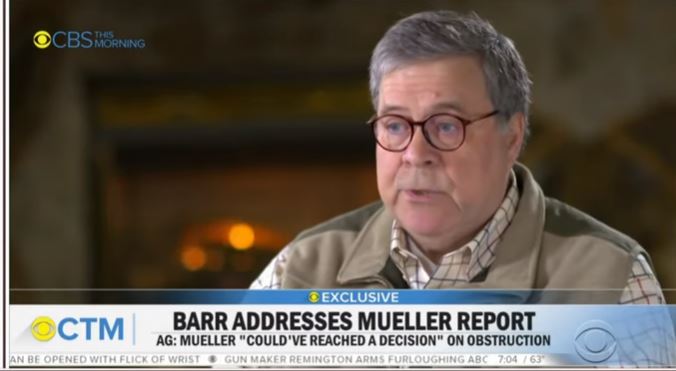 Saturday’s New York Times “news analysis” was filled with regret that straight-shooting Robert Mueller was outfoxed by dastardly Donald Trump and his “handpicked” sidekick Attorney General William Barr. Reporters Mark Mazzetti and Katie Benner paid tribute to Mueller, who turned out just too principled for his own good: “In Inquiry, Mueller Played by the Rules; Trump Had His Own.” The text box: “An investigation that was disciplined and quiet in an era of chaotic noise.” They led off with anti-Trump snark.

The president of the United States appears to believe that you don’t matter unless you are on television. By that measure, Robert S. Mueller III’s 10-minute soliloquy seemed to have seized his attention.

But even though Mr. Mueller, the special counsel, cut through the legalese of his 448-page report on Wednesday to make clear that his investigation in no way exonerated President Trump, he stopped short of delivering a punchy sound bite to summarize his inquiry. Mr. Trump has had one for two years -- “No collusion! No obstruction!” -- and recently had White House aides print the slogan and hang it on his lectern.

Mr. Mueller’s refusal to pass judgment on whether the president broke the law is one example of how the special counsel operated by rules ill fitted for the Trump era. He said nothing and the president said everything. He worked in secret, allowing the president to fill the void with reckless accusations of a witch hunt. His damning conclusions were encased in dense legal jargon that the president distorted into a vindication.

Mr. Mueller seemed to expect that the system would work as it had in the past, with Congress or perhaps voters making the decision about whether Mr. Trump had committed a crime, only to see the president’s handpicked attorney general -- and Mr. Mueller’s longtime friend -- make his own determination that there was not enough evidence to support such a charge.

More of Mueller the hero:

Mr. Mueller handled the part of his investigation involving the president’s conduct in office with extreme care, allowing only a part of his team to develop evidence on the obstruction-of-justice matter. The other investigators were walled off from that part of the inquiry, according to several people with knowledge of the structure of the special counsel’s office.

Many Democrats accepted the silence of the special counsel because they believed he might be building toward a knockout blow -- a report so harmful to the president that it would silence Mr. Trump’s criticism about the legitimacy of the Mueller investigation. The report was indeed damning, but Mr. Mueller’s decision to avoid explicitly saying that he expected Congress to weigh in on the obstruction-of-justice evidence left some top lawmakers confused about how to proceed.

By hewing to Justice Department policy that prosecutors should not interpret their findings in public, Mr. Mueller opened the door for one of the Trump administration’s savvier operators to interpret his findings for him.

That would be Attorney General William Barr, accused of having “set the narrative about the Mueller investigation’s conclusions even as Mr. Mueller himself remained silent.”

Also on Saturday, Benner had a standalone story, a hostile summary of a Barr interview with another outlet, “Barr Escalates Criticism Of Special Counsel Team.”

Attorney General William P. Barr ratcheted up his criticisms of the special counsel’s office and defended President Trump’s actions in a wide-ranging interview broadcast on Friday.

In playing down the Mueller report’s critiques of the president, Mr. Barr has also opened himself to attacks that he is aligning himself too closely with a president who has attacked the rule of law and is eroding the Justice Department’s independence.

Mr. Barr did nothing to quell those criticisms in the interview, saying that he saw no evidence that Mr. Trump had eroded America’s democratic institutions. “One of the ironies today is that people are saying that it’s President Trump that’s shredding our institutions. I really see no evidence of that,” Mr. Barr said.

The Times once again went to bat for U.S. national security agencies, an odd position for an ostensibly fact-finding enterprise.

And again raising the possibility that national security officials who did not like Mr. Trump had abused their powers in an attempt to influence the 2016 election -- a specter he has put forward no facts to support -- he argued that such an effort would be just as bad as a foreign power working to manipulate an American presidential election.