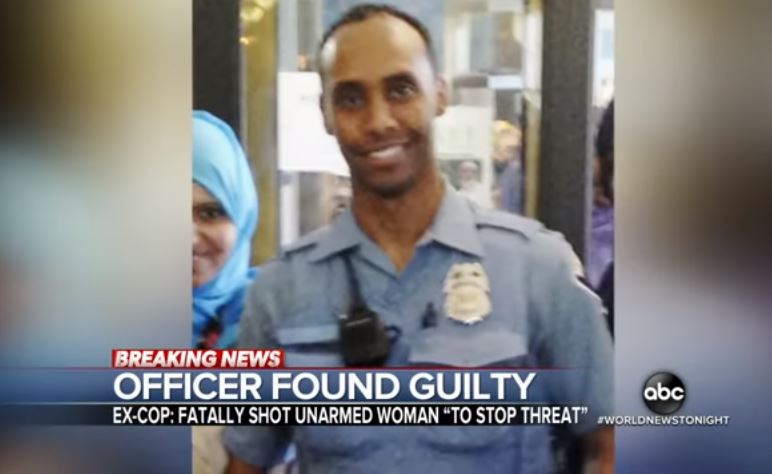 New York Times reporter John Eligon, after years of criticizing police in the aftermath of racially charged shootings, is suddenly concerned about police being unfairly treated.

He led off Saturday’s National section page with “Black Officer, White Victim and Rare Murder Conviction,” on the verdict of third-degree murder a Minneapolis jury returned against Mohamed Noor, a former police officer and Somali-American Muslim, in the shooting of Justine Ruszczyk.

The online headline had more room to hint at why liberal readers should be concerned that a police officer was being convicted of murder: “A Black Officer, a White Woman, a Rare Murder Conviction. Is It ‘Hypocrisy,’ or Justice?" The text box: “Uncomfortable questions about the racial dynamics of a deadly shooting.”

A slanted “questioning” process, helped along by Eligon leaving out Noor’s discredited defense of his decision to fire on Justine Ruszczyk.

The national debate over race and policing has felt particularly close to activists in Minneapolis, who viewed several cases in their region as examples of police officers not being held accountable for killing black civilians.

But when the justice system finally came down on an officer in a fatal shooting this week, it was not exactly the victory those activists had been seeking.

Left-wing activists in favor of police getting away with crimes?

Mohamed Noor, who is black, Somali and Muslim, became the first Minnesota police officer convicted of murder in an on-duty killing, when a jury found him guilty on Tuesday in the fatal shooting of Justine Ruszczyk, who was white.

While many in the community said Mr. Noor should have been held accountable, they could not help but wonder what the outcome would have been if the races of the officer and the victim had been flipped.

Even as activists and community leaders said that Ms. Ruszczyk deserved justice and expressed their condolences for her family, the verdict raised uncomfortable questions about the racial dynamics of the case.

Some saw a system and a society that was quick to embrace and sympathize with Ms. Ruszczyk, a benefit that black victims rarely enjoy. Others felt that Mr. Noor did not get the vocal support of the police establishment that they usually see in police-shooting cases and wondered whether this would deter black people from law enforcement careers.

The Times is suddenly opposed to prosecuting police for fatal shootings.

In 2016, a police officer in a suburb of St. Paul, Minn., shot and killed Philando Castile, who was black, during a traffic stop. The officer, who was Latino, was charged with manslaughter and acquitted by a jury after saying he had feared for his life.

In the Noor case, Mike Freeman, the Hennepin County prosecutor, was criticized by some who said he was holding Mr. Noor to a different standard than he has white officers -- an accusation that the prosecutor fiercely denied after the verdict was announced.

But one can consider the Castile case a miscarriage of justice, and still favor Noor receive justice in his own.

Ms. Ruszczyk, who sometimes used the last name of her fiancé, Don Damond, had called the police late one night in July 2017 to report hearing what sounded like a woman in distress in the alley behind her house. Mr. Noor and his partner were in their squad car in the alley investigating when Ms. Ruszczyk approached.

Mr. Noor, 33, testified during the trial that he had heard a bang and had fired one shot from the passenger’s seat when Ms. Ruszczyk appeared at the driver’s side window.

Mr. Noor’s explanation did not convince the racially diverse jury, which convicted him of third-degree murder and second-degree manslaughter.

In his attempt to make the Noor case a test of racial and religious bigotry, Eligon left a lot out. As CBS News reported:

Prosecutor Amy Sweasy....noted that neither Noor or his partner Matthew Harrity mentioned [the bang] at the scene, with Harrity first talking about it three days later in an interview with a state investigator, and pointed out that Damond's fingerprints were not found on the squad car.

Eligon found no end of activists willing to take the side of an officer convicted by a jury of murdering a civilian -- again, a bizarre position for him to take considering this joking (?) tweet from 2017 about a runaway cow in Brooklyn being recaptured by police: “Somehow the police were able to catch this cow without killing it. I wonder if ... nah, nevermind.”

He tweeted out his most recent story like this: “A black police officer was convicted of murdering a white woman in Minneapolis, and now the city is paying her family a record $20 million. Activists are decrying what they see as a racial double standard.”

Eligon has previously tried to turn the tables on critics of the anti-Semitic ravings of Rep. Ilhan Omar, under the headline “Unchecked ‘Hate’ Toward Rep. Ilhan Omar Has American Muslims Shuddering.”

Before that, he had gone ridiculously soft on the racist, sexist, conspiracist Black Israelites, after the D.C. and NYC rabble-rousers made it into the news cycle after hurling verbal assaults against the Kentucky Catholic school teens during the infamous Lincoln Memorial saga.