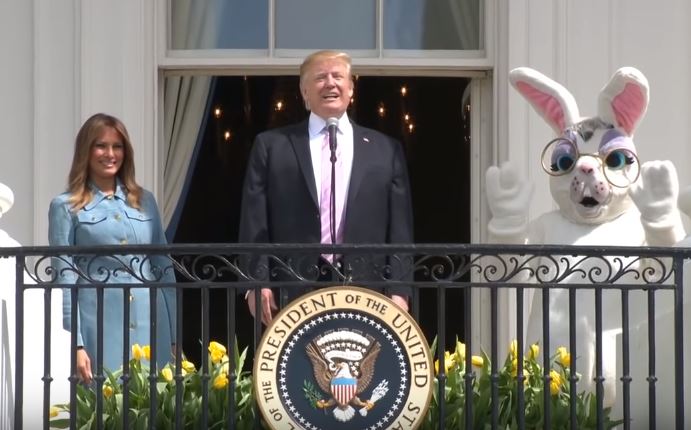 The New York Times’ hostile coverage of the annual White House Easter Egg Roll proved the paper wouldn’t dare give the Trump administration an easy boost with the non-offensive ritual, the way it did during the Obama administration. The headline in Tuesday’s edition was the giveaway: “Easter Eggs Come With a Side of Politics.” The online headline: “At a White House Tradition, Politics Color Everything but the Easter Eggs.” Katie Rogers reported:

At the White House Easter Egg Roll on Monday, President Trump ditched his escort -- the Easter bunny -- to take up a decidedly unfestive agenda: He fielded questions about impeachment and unruly advisers before briefing a child about the construction of a wall at the southwestern border.

As hundreds of children hunted for eggs, Mr. Trump wandered over to take questions from journalists. He addressed the “terrible” terrorist attacks in Sri Lanka, the possibility of impeachment proceedings -- “not even a little bit” worried, he said -- and the lengthy investigation carried out by Robert S. Mueller III, the special counsel, which contained accounts of advisers who repeatedly declined to carry out his wishes, including a request to fire Mr. Mueller....The portrait of tonal dissonance was complete.

Politics have become a hallmark of even the most staid White House holiday traditions under Mr. Trump.

Months later, administration officials, who often operate with an at-war mentality, have become even more adept at multitasking. In an interview on Monday from the South Lawn with “Fox and Friends,” one of the president’s preferred programs, Sarah Huckabee Sanders, the White House press secretary, claimed that a reporter had called for her decapitation. (That reporter, April Ryan, was merely calling for her firing.)

As Ms. Sanders continued to rail against what she referred to as the “liberal media,” a military band played “Jingle Bells” and families behind her posed with commemorative Easter eggs.

After a few paragraphs of the actual events, it was back to Trump:

Nearby on the South Lawn, Mr. Trump careened from Easter to politics. At one point, he stopped to sign one child’s T-shirt and autographed the arm of another young attendee. As he was helping children color in cards for American troops, a child celebrating the holiday paused to ask him about progress on a wall he has promised to build along the southwestern border.

This month, the president threatened to immediately seal the border with Mexico and then backed away from that promise. He accepted the resignation of Kirstjen Nielsen, the homeland security secretary, and signaled that he was prepared to enact even fiercer immigration policies.

On Monday, the president seemed to marvel at the young attendee’s interest in an area that has remained top-of-mind among his most fervent supporters, and seemed to welcome the validation.

In 2017, reporter Julie Hirschfeld Davis made a messy anti-Trump omelette out of the event, with three full stories, one defending a false tweet she made about gold-colored Easter Eggs: “It seemed an apt metaphor for a White House plagued with understaffing and disorganization from the start.”

There were basketball games and soccer matches, yoga sessions and double-dutch jump rope performances. In an outdoor, open-air kitchen, chefs cooked up turkey burgers and guacamole, mango smoothies and other assorted healthy dishes. And, of course, hundreds of delighted children in their festive finest rolled and rolled and rolled countless pink, yellow and sky blue Easter eggs in the hazy Monday sunshine.

While faulting Trump for supposedly playing politics with Monday’s Easter Egg Roll, the Times made sure that Easter Sunday itself was a sacred political space for President Obama. The celebration of Obama's 2008 speech on race continued on Easter Sunday in a front-page story, in which the Times canvassed pastors at urban liberal churches: "Obama Talk Fuels Easter Sermons - Some Religious Leaders Interweave Race and Resurrection."