New York Times reporter Peter Baker managed to peel himself away from the Mueller report long enough to lavish almost 1,400 words on a biography of the late first lady Barbara Bush, The Matriarch, on Thursday: “To Barbara Bush, Donald Trump Represented ‘Greed, Selfishness.’ (Those quotes were penned by Bush in her diary nearly 30 years ago and are now headlne news.)

The story’s text box expanded the argument: “Because of Mr. Trump, Mrs. Bush gave up on her party.” 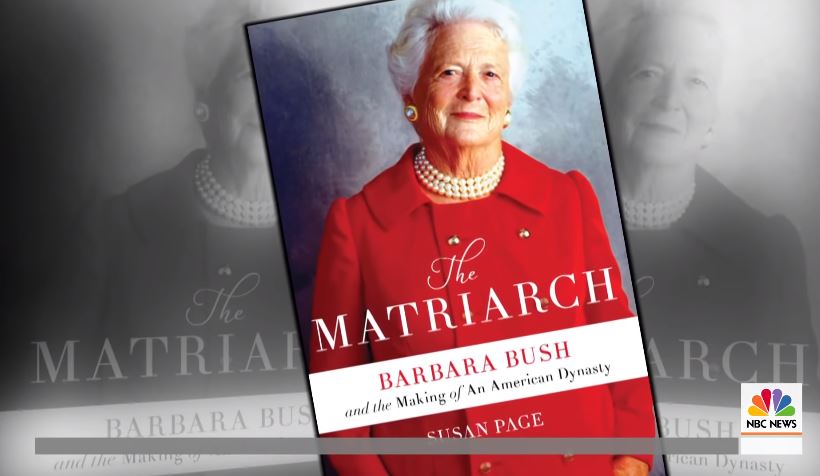 For decades, she was the grande dame of the Grand Old Party, the white-haired, pearl-wearing, tart-tongued Republican matriarch and, in the words of one eulogist, the first lady of the Greatest Generation. When she left the White House, she was deemed by one poll the most admired woman in the world.

But in the months before her death last year, Barbara Bush, the wife of one Republican president and the mother of another, abandoned the party she and her family had spent their whole lives building, horrified by President Trump’s election and deeply disturbed by his administration.

Mrs. Bush’s journey from Republican stalwart to Never Trumper is chronicled in The Matriarch, a biography by Susan Page, the Washington bureau chief of USA Today, to be published Tuesday by Twelve, an imprint of the Hachette Book Group. Ms. Page interviewed Mrs. Bush five times before the former first lady died in April 2018 at age 92, and had exclusive access to her diary.

Among other things, it recounts Mrs. Bush’s strained relationship with Nancy Reagan when George Bush was serving as vice president, describing how she crossed the Bushes off invitation lists to White House events. It reveals that her husband was outraged when his 1988 presidential campaign hired Roger J. Stone Jr., who would later come to fame as Mr. Trump’s adviser indicted on a charge of obstruction of justice, and demanded that he be fired.

And the book explores incessant but never proven rumors that Mr. Bush had an affair with Jennifer Fitzgerald, a longtime assistant. While not reaching a definitive conclusion, Ms. Page quotes an unnamed “member of the Bushes’ inner circle” confirming that they did have an extramarital relationship.

She likewise evolved on sexual orientation. In 2015, at lunch with Mr. Meacham and the historian Timothy Naftali, she criticized the Obama White House for making a big show of announcing that it had hired the first openly transgender person. Mr. Naftali told her he was gay and explained why it was important to know about the appointment.

After more anecdotes revealing the fraught relationship between Barbara Bush and Nancy Reagan, Baker moved on to using the book to dump on the current Republican occupant of the White House, with Bush even blaming Trump for a heart problem that required hospitalization.

She blamed anxiety over Mr. Trump for a heart spell that hospitalized her in June 2016 and erupted when he suggested that her son could not handle Russia. “Putin endorsed him, for heaven’s sake,” she exclaimed. “Putin the killer! Putin the worst! He endorsed Trump! That’s an endorsement you don’t want.”

Political memoirs are often politicized by the liberal press, and the Times has eagerly weaponized biographies and autobiographies to score points against Republican figures. Kitty Kelley’s trashy biography of Nancy Reagan notoriously made the paper’s front page in 1991. The Kelley book contained base gossip, scurrilous and unsubstantiated rumors, that didn’t stop the Times from rehashing rumors about Ronald and Nancy Reagan.

By contrast, the Times in 2007 was quite angry over conservative Supreme Court Justice Clarence Thomas’s autobiography, accusing Thomas of settling scores against Anita Hill and others.