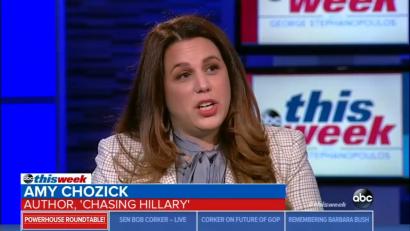 The New York Times devoted 2,200 words on the front of its Sunday Review opinion section to “Can Peer Pressure Defeat Trump?” The text box: “Democrats need millennials to turn out. These apps can help.”

But the piece, which cheerleads for liberal millennials to pressure their friends into voting against Trump in 2020, didn’t come from an outside liberal writer, but Amy Chozick -- who covered the Hillary Clinton campaign for the paper in 2016.

Chozick is now billed as a “writer at large covering business, politics, and media, and author of Chasing Hillary.” She no longer has to try to be objective -- not that she tried overly hard when she reported on the Clinton campaign.

Twelve years ago, social scientists cracked the code on how to get Americans to vote. Before a special election in Michigan, 100,000 households received slightly different mailers: One reminded them that voting was their civic duty. Another applied gentle social pressure by including the voting history of everyone in that particular household (“Who votes is public information!” it reminded them). The final flier -- and by far the most powerful -- revealed the voting history of the recipients’ neighbors.

“What if your neighbors knew whether you voted?” it asked, along with a warning that after the election, researchers would “publicize who does and does not vote.”

It worked....but people hated it. Now app-based variations on the idea using public records are out there. Chozick downplayed privacy concerns in the name of defeating Donald Trump.

....even as we abandoned our privacy with a swipe of the opt-in button and as apps that rely on social pressure proved effective in dieting, parenting and saving for retirement, political organizers largely ignored the power of peer pressure. Then came 2016 and the election of Donald Trump....

The shock of Mr. Trump’s election galvanized several developers who had worked on Barack Obama’s presidential campaigns. Steeped in Silicon Valley debates about privacy, they wondered if they’d been too timid about harnessing the enormous trove of publicly available voter data. After all, party affiliation and voting history had long been used internally by campaigns. Maybe political groups needed to stop caring about people’s feelings if it helped get them out to vote.

Mikey Dickerson, the executive director of the New Data Project and a former Google engineer who was the chief of the United States Digital Service in the Obama administration, had learned about the Michigan survey in 2008, but he didn’t come up with his VoteWithMe app until 2017. The app outs anyone who didn’t vote in previous elections.

(Alyssa Milano and Alexandria Ocasio-Cortez, looks like you both sat out the 2014 midterms.)

There’s no doubt that the point of the new apps is to elect Democrats (and defeating Trump). Chozick again strangely dismissed privacy concerns.

....Democratic pollsters predict that increasing turnout among millennials by 10 percentage points would all but guarantee they defeat Mr. Trump in 2020.

In an era when privacy feels like a nostalgic notion and our political leanings can be more or less gleaned from where we live, how we dress and what we watch, is there even such a thing as the sanctity of the voting booth?....

Maybe that was why I felt compelled one Sunday afternoon to sit in a coffee shop with a friend and scroll through VoteWithMe with the giddy enthusiasm of a sample sale. I learned that one friend who lives in the West Village, owns a Beto T-shirt and has been known to insufferably quote the Pod Save America bros didn’t vote in the past midterm elections. (You know who you are.) My uncle in Texas who watches Fox News, however, was designated a “strong voter.”

That recent campaign reporter Chozick would be handing out tips on beating Trump is no surprise. Her Clinton-beat reporting was forgiving of Hillary Clinton and dismissive of Bill Clinton’s harassment (and possibly worse) victims. She even apologized about her paper actually covering campaign news -- the leaked emails from the Clinton camp. Chozick herself admitted in her campaign book Chasing Hillary that her Clinton coverage was “neutral to positive, with plenty of wet kisses thrown in.”