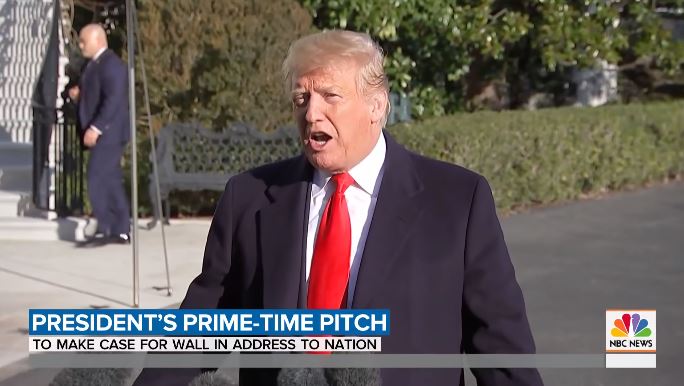 The front of Wednesday’s New York Times declared all was well on the Southern border, no matter what President Trump or his alarmed supporters may say: “No Crisis Here, Say Neighbors Close to Mexico -- Citing Other Problems ‘That Need Fixing.’”

The reporting team of Simon Romero, Manny Fernandez, Jose A. Del Real and Azam Ahmed found nothing but “tranquility” all along the border. The jump-page headline: “No Immigration Crisis Here, Tranquil Town Along Southern Border Says.” The text box: “Finding few who share the president’s sense of alarm over the need for a wall.”

Even as the television networks reluctantly aired a few worries about border security, the tone of the Times story was utterly dismissive of border security concerns, though anyone who looked could have found long-standing pre-Trump reasons for concern.

Just minutes from the border in rural New Mexico, the Borderland Cafe in the village of Columbus serves burritos and pizza to local residents, Border Patrol agents and visitors from other parts of the country seeking a glimpse of life on the frontier. The motto painted on the wall proclaims “Life is good in the Borderland.”

“This is the sleepiest little town you could think of,” said Adriana Zizumbo, 31, who was raised in Columbus and owns the cafe with her husband. “The only crisis we’re facing here is a shortage of labor. Fewer people cross the border to work than before, and Americans don’t want to get their hands dirty doing hard work.”

That quote conveniently echoes a liberal theme on immigration, which also popped up unsupported in a New York Times fact-check, which the Times admired so much, it posted oversized excerpts on the front of nytimes.com. To Trump’s assertion that illegal immigration drives down wages, the fact-checking page was slippery:

Some economists argue that immigrants drive down available jobs and wages for Americans only if they are competing for the same jobs as the domestic work force. In many cases, immigrants -- legal or illegal -- are seeking jobs that American citizens do not want to do.

Apparently the Times no longer cares about jobs for the poorest Americans.

President Trump has shut down part of the government over border security and his plan to build a wall along the border with Mexico, and in a prime-time speech on Tuesday night he painted a bleak picture of life in towns like Columbus.

He said border residents were suffering through a “humanitarian crisis,” and he described a landscape scarred by violence and prowled by “vicious coyotes and ruthless gangs.” But that is not how Ms. Zizumbo sees it. People in Columbus, she said, opposed the idea of a wall by about a “90-to-10 margin.”

“Enough about the wall already,” she said. “We have other problems here that need fixing.”

Extending nearly 2,000 miles from southern Texas to a fence jutting out into the Pacific Ocean in San Diego, America’s border with Mexico is as long and as varied as the terrain. Remote spots in the desert like Columbus, a town of 1,600 people about 80 miles west of El Paso, are sleepily tranquil....

In anticipation of the president’s speech, The New York Times sent correspondents to the Mexico side of the border and to the four states on the United States side -- California, New Mexico, Arizona and Texas -- and found few who shared the president’s sense of alarm.

Many said there was indeed a humanitarian crisis unfolding, but they blamed the Trump administration for worsening it with a series of policies aimed at deterring Central American migrants from making the journey....

A cattle rancher in southern Arizona said he had traveled to Mexico a day earlier, and he saw no emergency. The lines were long -- officials have shut down the number of ways people there can cross -- but there were no signs of conflict or people pressing to get in.

“There is no border problem, except for ones we are causing,” said the rancher, who said he had not had any problems with illegal border crossers on his property and who asked not to be identified out of fear of retribution from strident supporters of Mr. Trump’s planned border wall. “There’s no need for a bigger wall. There is not a border crisis down here.”

The story ended with a random protester who apparently spoke for the paper itself.

Hours ahead of Mr. Trump’s address on Tuesday, Randy Shaw, 71, was outside the Borderland Cafe. He held a sign that read “Stop truth decay: Dump Trump.”

Mr. Shaw is from Wyoming, but spends winters in Columbus. “This whole crisis thing is Trump’s creation,” he said. “Don’t let him fool you.”

In a Wednesday nytimes.com article, reporter Julie Hirschfeld Davis figured out what the people really want:

While Mr. Trump has launched an elaborate public-relations effort to draw Democrats into a debate over the wall itself -- even the material to be used to construct it -- Democrats are just as determined to talk instead about a more universally resonant theme: the need to get the government open and functioning while negotiations continue.

“Universally resonant” to whom? Americans in general, or those who work directly for or are contractors for the federal government, and their supporters in the press?