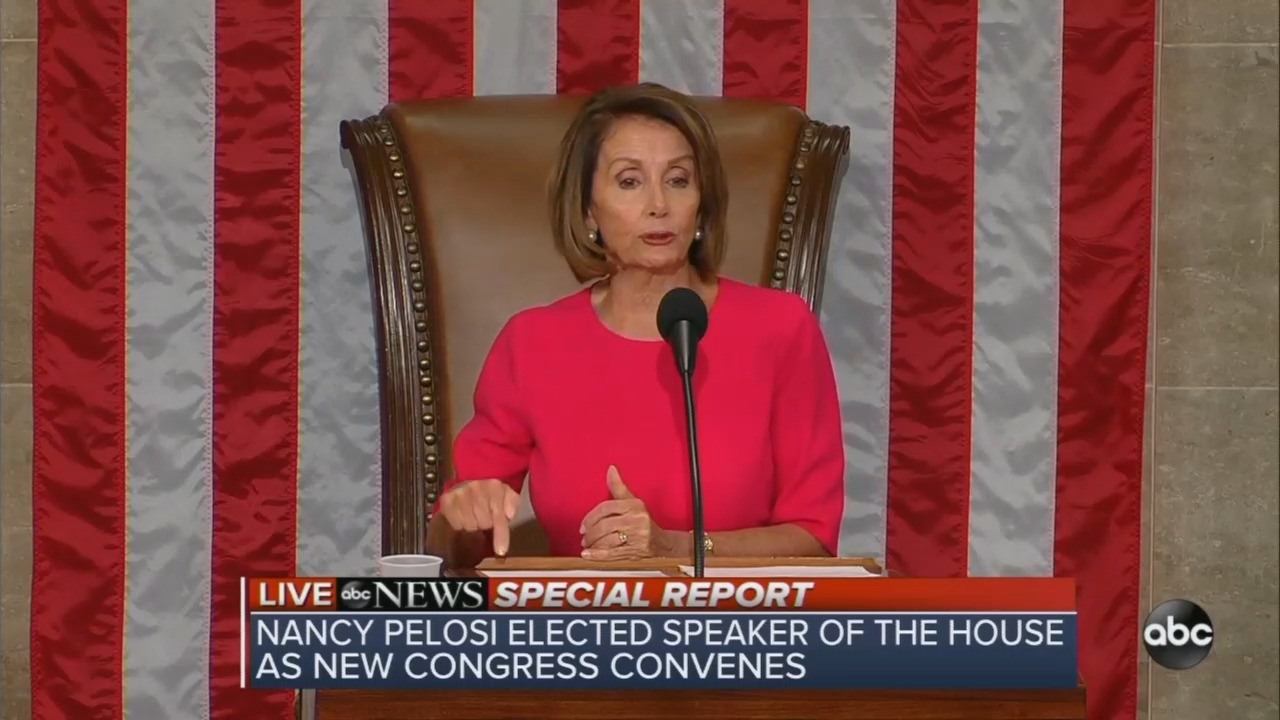 California Democratic Rep. Nancy Pelosi is Speaker of the House again, and the New York Times Sheryl Gay Stolberg, fresh off whitewashing the reputation of new Rep. Ilhan Omar, is thrilled: “Same Gavel, but Whole New Challenge for Pelosi.” The online headline had more room to gush: “Nancy Pelosi, Icon of Female Power, Will Reclaim Role as Speaker and Seal a Place in History.” The text box on the story’s inside continuation page: “Poised to be the public face of the opposition in the era of #MeToo.”

There was a brief moment in Nancy Pelosi’s life when she worried she had too much power. She had so many titles in the California Democratic Party, including chairwoman, that she told Lindy Boggs, a Louisiana congresswoman, that she was thinking of giving some up.

That was in 1984, and Ms. Boggs “said, ‘Darlin’, no man would ever think that. Don’t you give anything up,’” Ms. Pelosi said in a recent interview, leaning forward as she mimicked Ms. Boggs’s Southern accent. “And then she said, ‘Know thy power.’”

More than three decades later, Ms. Pelosi is all but assured on Thursday of reclaiming her former title as speaker of the House, the first lawmaker in more than half a century to hold the office twice. With the gavel in hand, she will cement her status as the highest-ranking and most powerful elected woman in American political history.

And in the era of #MeToo, Ms. Pelosi, a mother of five and grandmother of nine, will be the public face of the opposition to a president who won the White House after disparaging women, and paying hush money to a Playboy model and a pornographic film actress who said they had extramarital affairs with him.

Ms. Pelosi knows that this speakership will be defined by how she handles President Trump. The last time she was speaker, from 2007 to 2011, legislative accomplishments made her reputation. She muscled through bills that bailed out Wall Street and helped arrest an economic free-fall, allowed gays to serve in the military, overhauled the nation’s banking laws and expanded access to health care for an estimated 17 million people. Many say passage of the Affordable Care Act is her signature achievement.

About the televised Oval Office meeting on Trump’s border wall, Stolberg gushed that “Her power stride out of the White House that day, in dark sunglasses and an orange coat, turned Ms. Pelosi into a fashion trendsetter.”

Apparently it’s fine for Pelosi to insult Trump, if not the other way around:

A generation of young feminists is taking notice.

“She’s unapologetic about her ambition, she’s insulting Trump’s manhood and storming out of the White House in orange coat and sunglasses,” said Amanda Litman, 28, and a founder of Run for Something, which recruits and supports young liberal candidates. “It’s very authentically her in a way that I’m not sure she was able to do in past decades.”

Acts the Times would condemn when committed by conservatives are praise-worthy when a Democrat does them, like raising tons of money.

It may have been matched only by her remarkable talent for raising money. Ms. Pelosi has raised $728.3 million for Democrats since 2002, her office said.

Now, after an election that ushered a record number of women into Congress, Ms. Pelosi is determined not to let another history-making moment pass....

Stolberg complained that the GOP “demonized” Pelosi as a “San Francisco liberal,” a complaint in line with the paper regularly accusing Republicans of “caricaturing” Pelosi when they dare to accurately describe her ideology. (By contrast, Stolberg had no problem straightforwardly calling Rep. Mark Meadows part of the “conservative House Freedom Caucus.”