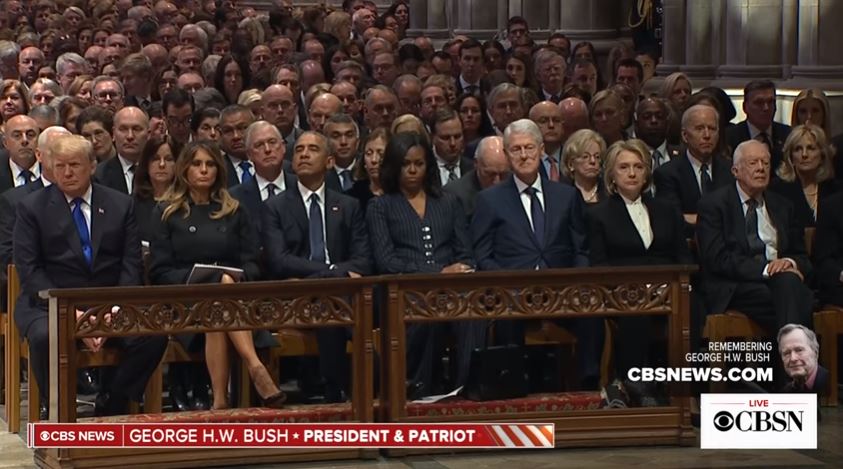 New York Times reporter Peter Baker marked the Washington National Cathedral ceremony for former President George H. W. Bush in “A Day of Pageantry Fit for a Political Patriarch” on the front of Thursday’s edition. But his main focus was on attacking one of the attendants: President Trump, through biased interpretation of body language and some light mind-reading.

In a rare period where Trump isn’t actively seeking a spotlight, the Times (and the Washington Post) turned the harsh glare on Trump anyway. At a moment that promised bipartisan respect, the Times wants to deepen the very divisions it pretends to deplore.

Baker built up Bush in a way the Times never did during his life, in order to contrast him with the sitting Republican president:

As bells tolled and choirs sang and flags flew at half-staff, the nation’s 41st president was remembered as a “kinder and gentler” leader whose fortitude steered the country through a tumultuous moment in history even as his essential decency stood in contrast to the politics of insults now in vogue.

President Trump joined all four living former presidents as well as more than 3,000 foreign leaders, lawmakers, Supreme Court justices and other mourners at the service, but given his history of rancor with the Bush family, he had no speaking role. As he took his seat in the front row, Mr. Trump awkwardly shook hands with Barack and Michelle Obama but otherwise did not interact with his presidential peers, recite the Apostles’ Creed or sing the hymns.

There was less of an overt sense of rebuke to Mr. Trump than in September at the funeral for Senator John McCain, to which he was not invited, but the implicit contrasts between the former and current presidents were hard to miss. While speakers talked about Mr. Bush’s civility, his commitment to the institutions of government and his faith in alliances, Mr. Trump was sitting feet away, his arms tightly crossed, as if in defiance.

Then Baker employed some mind-reading.

Without directly saying so, the speakers pushed back against Mr. Trump’s mockery of the former president’s volunteerism slogan “a thousand points of light” during campaign rallies this year.

“To us,” the younger Mr. Bush said, “his was the brightest of a thousand points of light.”

(Baker has embraced Bush’s “a thousand points of light” slogan since Bush’s death, and repeatedly chided Trump’s mockery of the phrase. But his paper also took plenty of shots at the concept during Bush’s term. Here’s reporter Jason DeParle in 1991: “Among the oddities of the situation is that some critics of the Administration's Points of Light program have spent decades as advocates of volunteer work, calling its burden-sharing ethic central to a fair and democratic society. Some of these critics see the Bush effort as nothing more than political opportunism.”)

....The moments of bipartisan compromise that marked his presidency feel alien as the politics of anger and division dominate Washington and the country.

By “bipartisan compromise,” Baker seems to mean Bush reneging on his campaign promise by raising taxes.

But with time, Mr. Bush has become one of the most admired recent presidents, ranked third out of the past 10 in polls behind only Ronald Reagan and John F. Kennedy. During his eventful single term from 1989 to 1993, he helped bring the Cold War to a peaceful end, paved the way for the reunification of Germany, won the Persian Gulf war expelling Iraqi invaders from Kuwait and signed landmark environmental, civil rights and disabilities legislation.

[Historian John Meacham] also essentially explained Mr. Bush’s thousand-lights phrase to Mr. Trump. “Abraham Lincoln’s ‘better angels of our nature’ and George H. W. Bush’s ‘thousand points of light’ are companion verses in America’s national hymn,” Mr. Meacham said. “For Lincoln and Bush both called on us to choose the right over the convenient, to hope rather than to fear and to heed not our worst impulses but our best instincts.”

Some of the tributes may have gotten under Mr. Trump’s skin. Mr. Mulroney praised the North Atlantic Treaty Organization and the North American Free Trade Agreement, both of which Mr. Trump has sharply criticized.

Mr. Trump has been snappish with aides most of the week, according to administration officials, miffed in part by so many ceremonial events not related to him. He was impatient for the memorials to end but expressed pride in himself for remaining publicly civil. People close to the president called it a course correction after his peevish reaction to Mr. McCain’s death.