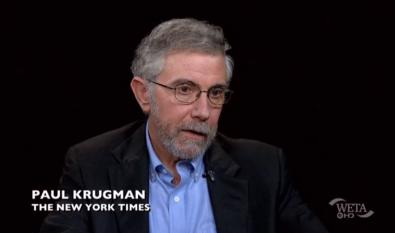 Paul Krugman’s Friday New York Times column, “Real America Versus Senate America,” is another dose of Blue State urban smugness from Krugman, He's only the latest liberal who, while accusing Trump of violating all political norms, turns around and advocates tossing aside traditional political structures like the Electoral College, the Supreme Court, and now the Senate when they interfere with Democrats obtaining power.

(On a side note, Krugman probably also hopes “Senate America” will become a lefty meme.)

Everyone is delivering post-mortems on Tuesday’s elections, so for what it’s worth, here’s mine: Despite some bitter disappointments and lost ground in the Senate, Democrats won a huge victory. They broke the Republican monopoly on federal power, and that’s a very big deal for an administration that has engaged in blatant corruption and abuse of power, in the belief that an impenetrable red wall would always protect it from accountability. They also made major gains at the state level, which will have a big impact on future elections.

But given this overall success, how do we explain those Senate losses? Many people have pointed out that this year’s Senate map was unusually bad for Democrats, consisting disproportionately of states Donald Trump won in 2016. But there was actually a deeper problem, one that will pose long-term problems, not just for Democrats, but for the legitimacy of our whole political system. For economic and demographic trends have interacted with political change to make the Senate deeply unrepresentative of American reality.

But here’s the thing: The Senate, which gives each state the same number of seats regardless of population -- which gives fewer than 600,000 people in Wyoming the same representation as almost 40 million in California -- drastically overweights those rural areas and underweights the places where most Americans live.

This is a tired liberal factoid, which is undermined a good deal by reality. Yes, Wyoming is small and sends two Republican senators to Washington. But small states like New Hampshire, Rhode Island, Delaware, and Hawaii send two Democratic senators to Washington (Vermont sends one Democrat and the other, Bernie Sanders, votes with the Democrats).

Krugman divides Americans up in a way that would be vilified if done by a conservative, pitting “real America” against the pretend “Senate America.”

I find it helpful to contrast the real America, the place we actually live, with what I think of as “Senate America,” the hypothetical nation implied by a simple average across states, which is what the Senate in effect represents.

After those insults, he has the nerve to follow up:

None of this is meant to denigrate rural, non-college, white voters. We’re all Americans, and we all deserve an equal voice in shaping our national destiny. But as it is, some of us are more equal than others. And that poses a big problem in an era of deep partisan division.

Not to put too fine a point on it: What Donald Trump and his party are selling increasingly boils down to white nationalism -- hatred and fear of darker people, with a hefty dose of anti-intellectualism plus anti-Semitism, which is always part of that cocktail....

We may, then, be looking at a growing crisis of legitimacy for the U.S. political system -- even if we get through the constitutional crisis that seems to be looming over the next few months.

These days, a “crisis of legitimacy” in politics seems to track very closely with “Democrats disappointed in the election results.”