NYT Round-Up: ‘Fact-Check’ for Kavanaugh on Front Page, But No Scrutiny for Blasey Claims

Rounding up New York Times coverage of the Kavanaugh saga from Saturday: It had the gall to issue a front-page fact-check on only one side of Thursday’s gripping Supreme Court testimony, in “At Points, a Judge’s Defense Misleads and Veers Off Course.”

The “fact check” doesn’t actually catch Kavanaugh in a lie, using the evasive words these fact checks generally use on Republicans: “This is disputed...This requires context,” and a single “This is misleading,” for Kavanaugh’s claim that Ford’s allegation was “refuted” by the other people allegedly at the gathering, when instead the people merely claimed they did not “recall” the gathering. Ok.

Needless to say, Christine Blasey Ford didn’t get one, though there were also several gaps in her testimony, including: How many people attended the party? Did she give her therapist notes to the Washington Post?

The paper’s “gender editor” Jessica Bennett also took a crack at the case on Saturday, bemoaning how unfair the process was on Blasey Ford: “Witness Walking a ‘Tight Rope’ of Testifying While Female.” 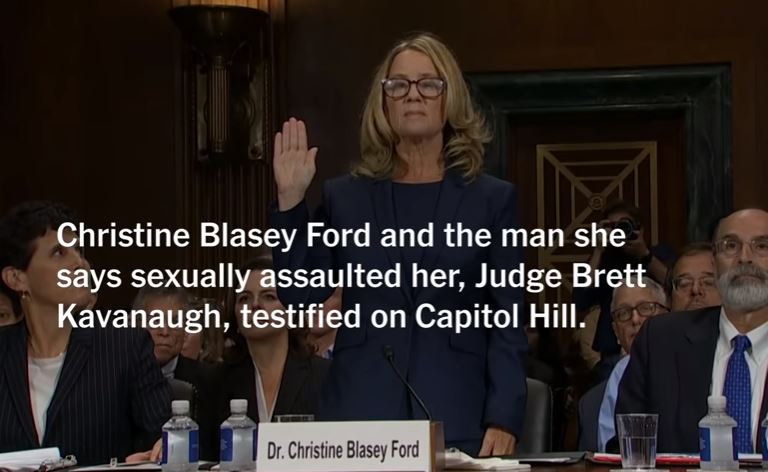 She dressed modestly, in a navy suit and dark-rimmed glasses. No flashy jewelry, little makeup.

She is a professor and psychologist with an impressive C.V.

She is white, and blond, and pretty -- but not too pretty -- with an intact family, suburban home and children.

She teared up in her testimony -- her voice cracking -- but she did not openly cry or break down.

And she smiled! She pleaded for caffeine and joked about Google interns renting out her home.

“These are all codes for ‘she is displaying proper expectations of femininity,’” said Marianne Cooper, a sociologist at Stanford who studies gender inequality....

There was the inevitable (and very weak) accusation of sexism on the part of old white Republicans.

There were the repeated interruptions by male senators of the women in the room, starting in the first minutes with the Republican chairman, Senator Charles E. Grassley.

By day’s end, though, we had another glaring double standard: a woman who gained trust by maintaining ultimate composure -- by balancing her expertise with being unthreatening -- and a man who tried to convince the world, or at least the president backing him, of his fitness by losing it: waffling between anger and tears, red in the face, and declaring himself a victim of “revenge on behalf of the Clintons.”

Clifford Krauss overheard a talk by longtime liberal media heroine Anita Hill and tossed that into the already toxic partisan mix: “Timely Advice: ‘Don’t Do Anything That Will Dehumanize You.’”

Anita Hill had some advice for Christine Blasey Ford.

First, she should know she is not alone.

Second, she need not talk publicly about her decision to open a frightening and embarrassing chapter of her life to scrutiny before the Senate Judiciary Committee, even though, yes, those hours in front of the television cameras would change everything that came after them.

“Don’t do anything that will dehumanize you or cause you pain or trauma,” Professor Hill said Friday, speaking to a conference of mostly young female tech employees in Houston. Her informal talk came just a day after Dr. Blasey’s Senate testimony about a sexual assault she said she suffered at the hands of Judge Brett M. Kavanaugh, who is being considered for a seat on the Supreme Court.

More than a quarter-century earlier, Professor Hill’s life had been turned upside down by her own appearance in 1991 before the Judiciary Committee, where she faced excruciating questions about sexual harassment allegations she had leveled against an earlier Supreme Court nominee, Clarence Thomas.

Krauss let Hill insist she was keeping an “open mind,” but of course she ended up believing Blasey because Kavanaugh had projected “anger.” Gee, wonder why?