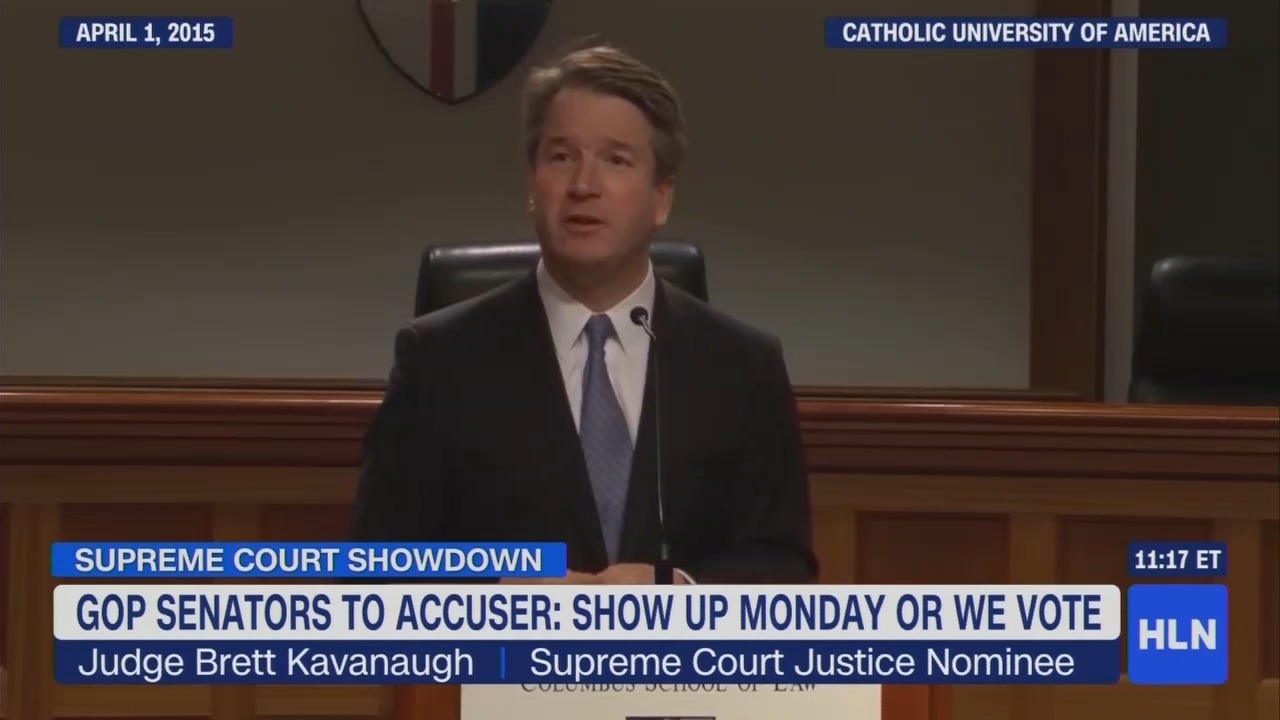 New York Times writer Matt Stevens seized upon a dubious angle regarding the last-minute assault accusations against Supreme Court nominee Brett Kavanaugh, “Drinking Days Fondly Recalled, Raising Eyebrows.” Stevens’ story was manufactured wholly from bad-faith insinuation and innuendo, based on light-hearted cracks by Kavanaugh in speeches about high school and law school drinking shenanigans that have been made in similar fashion by speakers a billion times before without comment.

Even other mainstream outlets haven’t emphasized that angle, but the Times ran with it in Thursday’s edition, clarifying the paper’s hostility toward the Kavanaugh nomination and shameless willingness to use any means necessary to combat it:

Christine Blasey Ford’s claims that Judge Brett M. Kavanaugh sexually assaulted her when they were teenagers while he was drunk have drawn attention to a speech he gave four years ago in which he discussed heavy drinking at Yale Law School -- and to an offhand remark about his high school days that he made during another speech.

Earlier this week, a transcript of a 2014 speech Judge Kavanaugh apparently gave at a banquet for the Yale Law School Federalist Society surfaced via a Washington Post reporter on Twitter; some of it was later transcribed and posted by the magazine Mother Jones.

(That would be the hard-left magazine Mother Jones.)

The speech, in which he imparted lessons to students and reminisced about his time at school, contained one section in which Judge Kavanaugh, now 53, fondly recalled some debaucherous -- if seemingly harmless -- nights of heavy drinking and revelry as a Yale Law student.

In one episode, he described taking a bus with his classmates to Boston for a Red Sox game and a night of barhopping, which ended with the students “falling out of the bus onto the front steps of Yale Law School at about 4:45 a.m.”

“Fortunately for all of us, we had a motto: ‘What happens on the bus stays on the bus,’” the speech said.

Then, on Tuesday, an apparently truncated video clip of Judge Kavanaugh giving another speech emerged. Referring to his high school in 2015, he again modified the frequently used cliché: “What happens at Georgetown Prep, stays at Georgetown Prep.”

He added: “That’s been a good thing for all of us, I think.”

Stevens let a Democratic hopeful for president warp Kavanaugh’s joking aside into a reflection of sinister character.

Senator Elizabeth Warren, Democrat of Massachusetts, tweeted the video of Judge Kavanaugh making the quip and said: “I can’t imagine any parent accepting this view. Is this really what America wants in its next Supreme Court Justice?”

He concluded with a quote form Blasey’s lawyers accusing some senators of having already “made up their minds” while insisting the F.B.I. investigate, though what factual details they are supposed to investigate, and even what jurisdiction the FBI would have to investigate, were left conveniently unspoken.

From the "Name that Party" file: Stevens managed in May 2017 to write an entire story about disgraced (and now imprisoned) Democratic Rep. Corrine Brown without mentioning the inconvenient fact that Brown was a Democrat.