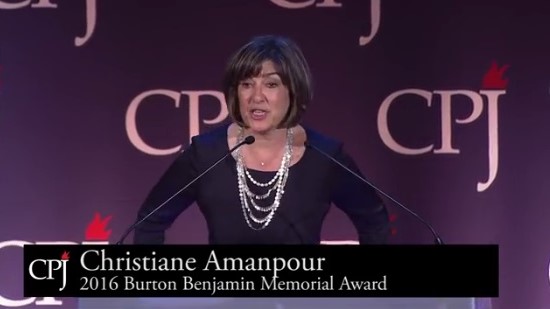 One blog on the inanities in CNN anchor Christiane Amanpour's impassioned address at the Committee to Protect Journalists dinner against granting any respect to conservatives in the "news" media product is not enough. In a second look at the transcript, one can see how Amanpour complained that Hillary Clinton was judged by an "exceptionally high bar" and Trump an "exceptionally low bar."

She also insisted, as many at CNN do, that the fact-based journalist never accepts a rebuttal on the "empirical scientific evidence" of global warming.

During an interview on my program this summer, the film-maker and historian Ken Burns asked me what would Edward R. Murrow do?

It appeared much of the media got itself into knots trying to differentiate between balance, objectivity, neutrality, and crucially, truth.

We cannot continue the old paradigm--let's say like over global warming, where 99.9 percent of the empirical scientific evidence is given equal play with the tiny minority of deniers.

I learned long ago, covering the ethnic cleansing and genocide in Bosnia, never to equate victim with aggressor, never to create a false moral or factual equivalence, because then you are an accomplice to the most unspeakable crimes and consequences.

I believe in being truthful, not neutral. And I believe we must stop banalizing the truth.

"Truthful, not neutral" is an Amanpour slogan. It's a wonderful motto for arrogant liberal bias. Liberalism is the "truth," conservatism is "falsehood," and so one should be celebrated, and the other pounded into dust. For example, Amanpour in this address compares the Trump/conservative side of the debate not only to falsehood, but as comparable to pracitioners of "ethnic cleansing and genocide," as well as the tyrants who would crush the "Arab Spring."

And we have to be prepared to fight especially hard for the truth in a world where the Oxford English Dictionary just announced its word of 2016: post-truth.

We have to accept that we've had our lunch handed to us by the very same social media that we've so slavishly been devoted to.

The winning candidate did a savvy end run around us and used it to go straight to the people. Combined with the most incredible development ever--the tsunami of fake news sites--aka lies--that somehow people could not, would not, recognize, fact check, or disregard.

One of the main writers of these false articles--these lies--says people are getting dumber, just passing fake reports around without fact checking. We need to ask whether technology has finally outpaced our human ability to keep up.

Trump voters are "dumber" voters prone to "hate speech." Does this strike anyone as someone who learned something about her political opponents in this last election? Or does it sound like the usual doubling-down? Conservatives are also pushing a "post-values world," she claimed:

Now, more than ever, we need to commit to real reporting across a real nation, a real world in which journalism and democracy are in mortal peril, including by foreign powers like Russia paying to churn out and place false news, and hacking into democratic systems here and allegedly in upcoming crucial German and French elections too....

We must also fight against a post-values world.

And let me hit back at this elitist backlash we're all bending over backwards to accommodate.

Since when were American values elitist values? They are not left or right values. They are not rich or poor values, not the forgotten-man values....

So yes, like so many around the world, I was shocked--very few ever imagined that so many Americans conducting their sacred duty in the sanctity of the voting booth, with their secret ballot, would be angry enough to ignore the wholesale vulgarity of language, the sexual predatory behavior, the deep misogyny, the bigoted and insulting views.

After Clinton was impeached for lying in the Paula Jones sexual harassment case, Amanpour gushed all over Hillary Clinton for her suffering, instead of demanding the truth about how she defended her husband's misogyny: "A lot of the women that I meet from traveling overseas are very impressed by you and admire your dignity. A lot of the people you meet are people who’ve suffered, people you saw today, and who believe that they identify with you, because they have seen you suffer.”

That's "truthful"? It's certainly not neutral. Amanpour claimed that she was a guardian of American values and ripped Laura Ingraham for suggesting otherwise:

If not, I will fight as a journalist--as we all must--to defend and protect the unique value system that makes these United States--and with which it seeks to influence the world.

The conservative radio host who may be the next White House press secretary says mainstream media is hostile to traditional values.

I would say it's just the opposite. And have you read about the "Heil, victory" meeting in Washington, DC this past weekend? Why aren't there more stories about the dangerous rise of the far right here and in Europe? Since when did anti-Semitism stop being a litmus test in this country? We must fights against normalization of the unacceptable.

Amanpour then mentioned the Brexit vote, where she also championed the Left and disparaged the Right.