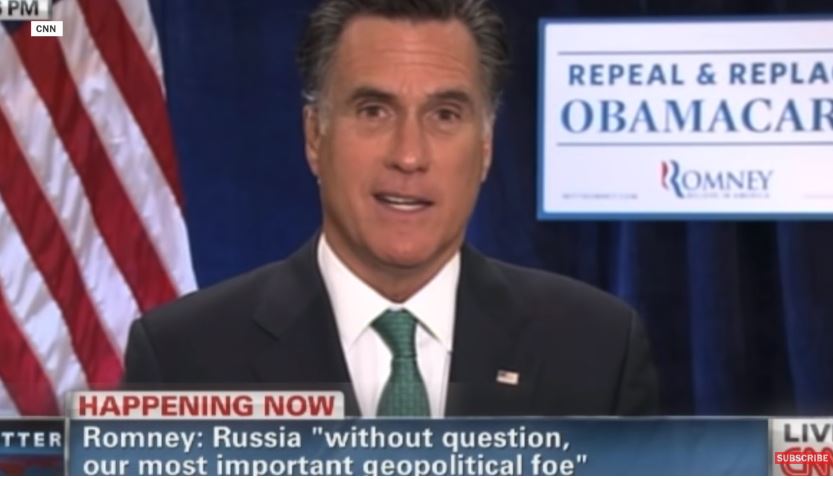 The media is ready to convict President Trump of “treason” for his shaky summit in Helsinki with Russian dictator Vladimir Putin and has been obsessed with Trump’s supposed “collusion” with Russia during the 2016 election campaign.

At the New York TImes, the trend has trailed into casual anti-Russian stereotyping that the paper would surely condemn if aimed at any other group, like a review of the new horror flick Unfriended: Dark Web, about deadly online trolling, with the throwaway line “I admit I raised an eyebrow on noting that a couple of the film’s producers are Russian.”

But this new-found fear of all things Russia is more than a little politically expedient. The New York Times is just one outlet that dismissed the very idea of Russia as a threat back in the spring of 2012, when Republican presidential candidate Mitt Romney took advantage of an embarrassing “hot-mic” moment from President Obama with then-Russian president (now prime minister) Dmitry Medvedev (in which Obama told the Russian that he would have “more flexibility” to negotiate on missile defense after he won the election in November) to call out Russia as America’s “No. 1 geopolitical foe.”

Aggrievement and outcry ensued at the paper. First, the Times embarrassed itself with the opening paragraph of its March 29, 2012 editorial “The Never-Ending Cold War.”

Two decades after the end of the cold war, Mitt Romney still considers Russia to be America’s ‘No. 1 geopolitical foe.’ His comments display either a shocking lack of knowledge about international affairs or just craven politics. Either way, they are reckless and unworthy of a major presidential contender.

That paragraph has not aged well, to say the least.

He went on to call Russia “without question our number one geopolitical foe,” which should come as a surprise to anyone who hasn’t been in a coma since before the September 11th attacks.

With the Republican nominating contest all but over, Mr. Romney now faces pressure to elaborate on other foreign policy views, including some that have puzzled experts in both parties, like describing Russia on CNN recently as America’s “No. 1 geopolitical foe.”

Mitt Romney’s recent declaration that Russia is America’s top geopolitical adversary drew raised eyebrows and worse from many Democrats, some Republicans and the Russians themselves, all of whom suggested that Mr. Romney was misguidedly stuck in a cold war mind-set.

Reporter Mark Landler in April was more concerned about a few verbal slips by Romney’s foreign policy team than the actual Russia threat.

Shifting the battle with Mitt Romney from jobs and taxes to the safer realm of foreign policy, Vice President Joseph R. Biden Jr. traveled to New York City on Thursday to praise President Obama as the man who got Osama bin Laden and to paint Mr. Romney as a cold war relic who would leave American troops stranded in Afghanistan....it was the Romney team that seemed dated. Pierre Prosper, who was an ambassador handling war-crimes issues for President George W. Bush, accused Mr. Obama of appeasing Russia by abandoning plans to put a missile defense site in “Czechoslovakia” -- a nation that has not existed since the early 1990s. John F. Lehman, a secretary of the Navy in the Reagan administration, said the “Soviets” were capitalizing on Mr. Obama’s weakening of the American military.

Helene Cooper jumped on Romney in an April story: