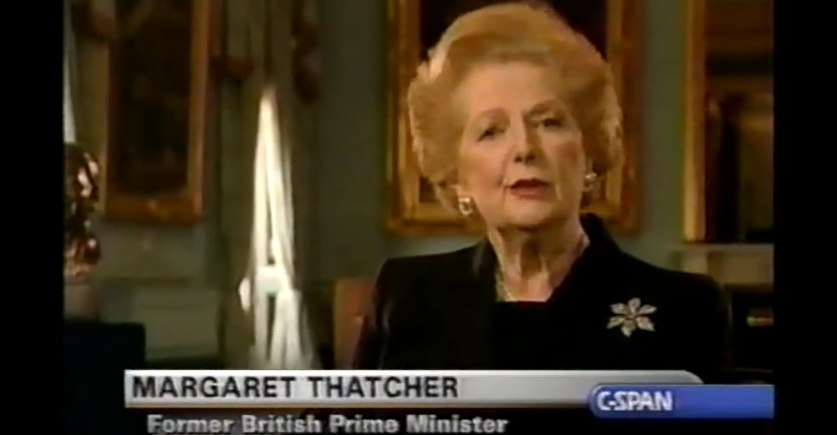 The front of Monday’s New York Times featured socialist-spouting economics reporter Peter Goodman using Prescot, a struggling town in northwest England, as a cudgel for Margaret Thatcher bashing worthy of a Marxist professor (as he used to do prominently in the Times, in articles like "The Free Market: A False Idol After All?").

The iconic British Prime Minister came in for factually deficient leftist contempt in “After Years of Fiscal Belt-Tightening, England is Feeling the Pinch – Prolonged Budget Cuts Reshape British Life.” The 2,500-word story is larded with sympathetic photos online of hunger-threatened children and closed fire stations, and illustrated on the front page with a photo of a child sitting forlorn on a brick wall, her mother having lost welfare benefits.

A walk through this modest town in the northwest of England amounts to a tour of the casualties of Britain’s age of austerity.

The old library building has been sold and refashioned into a glass-fronted luxury home. The leisure center has been razed, eliminating the public swimming pool. The local museum has receded into town history. The police station has been shuttered.

....A wave of austerity has yielded a country that has grown accustomed to living with less, even as many measures of social well-being -- crime rates, opioid addiction, infant mortality, childhood poverty and homelessness -- point to a deteriorating quality of life.

Whatever the operative thinking, austerity’s manifestations are palpable and omnipresent. It has refashioned British society, making it less like the rest of Western Europe, with its generous social safety nets and egalitarian ethos, and more like the United States, where millions lack health care and job loss can set off a precipitous plunge in fortunes.

Most view the Big Society as another piece of political sloganeering -- long since ditched by the Conservatives -- that served as justification for an austerity program that has advanced the refashioning unleashed in the 1980s by Mrs. Thatcher.

Britain hasn’t endured austerity to the same degree as Greece, where cutbacks were swift and draconian. Instead, British austerity has been a slow bleed, though the cumulative toll has been substantial.

In an alternate reality, this nasty stretch of history might now be ending. Austerity measures were imposed in the name of eliminating budget deficits, and last year Britain finally produced a modest budget surplus.

But the reality at hand is dominated by worries that Britain’s pending departure from the European Union -- Brexit, as it is known -- will depress growth for years to come....

From its inception, austerity carried a whiff of moral righteousness, as if those who delivered it were sober-minded grown-ups. Belt tightening was sold as a shared undertaking, an unpleasant yet unavoidable reckoning with dangerous budget deficits.

[Conservative lawmaker Neil O’Brien] rejects the notion that austerity is a means of class warfare, noting that wealthy people have been hit with higher taxes on investment and expanded fees when buying luxury properties.

This tidbit seems to neutralize the premise of the piece, but he soldiers on.

Britain spends roughly the same portion of its national income on public spending today as it did a decade ago, said Paul Johnson, director of the Institute for Fiscal Studies.

But those dependent on state support express a sense that the system has been rigged to discard them.

The real malefactors are the same as ever, he says.

He points at a picture of Mrs. Thatcher on the wall behind him...

Yet even in the socialist hotbed of the North of England, not all citizens were keen on the Times writing off their town as a lost cause. And the right-leaning Spectator (U.K.) fact-checked Goodman’s piece. For one, a new fire and police station was opened this year, despite Goodman’s claim the police station had been shuttered, and Prescot still has a library and a museum, despite Goodman’s suggestion that they had been consigned to history.