Former president and quite liberal Jimmy Carter actually managed to come off more moderate and less anti-Trump than the journalist interviewing him for the New York Times Sunday magazine.

Carter was interviewed about his new book Faith: A Journey for All. The interviewer was Dan Amira, head writer for The Daily Show with Trevor Noah. Talk about blending fake-news writers into the newspaper that sells itself because "The Truth Is Hard." Readers also saw a certain perverse respect for religion on display -- at least the Christianity of a liberal politician. Amira's first five questions, as condensed for the magazine: 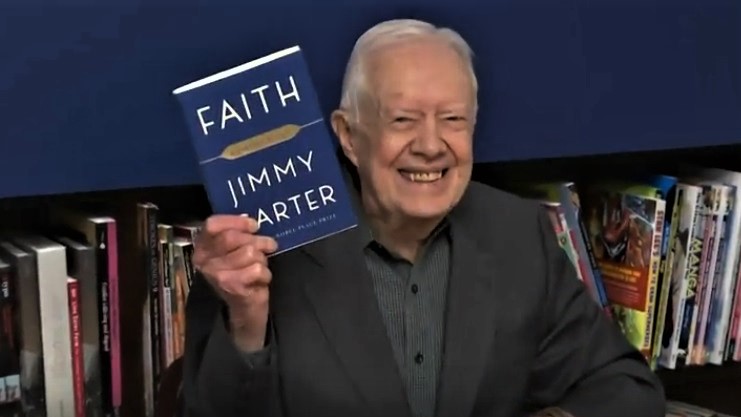 In your new book, “Faith: A Journey for All,” you write that despite believing you had only weeks to live following a cancer diagnosis in 2015, you had no fear of dying. Do you believe in an afterlife?

One ultimate test of faith in the Bible is when God tells Abraham to sacrifice Isaac. Have you ever thought about what you’d do if God told you to sacrifice your own son?

You write that American drone strikes in Syria, Afghanistan, Iraq and Yemen often result in high civilian casualties, which “contradicts our claim to be a peaceful nation devoted to human rights.” Do you think America is committing war crimes? (Carter answered in part, "I think sometimes we have bordered on committing war crimes.")

Amira then teed Carter up to contribute to the new-found Russo-phobia on the left, but Carter demurred.

You were the president during the Cold War. Who’s the greater threat: the Soviet Union then, or Russia now?

I think the Soviet Union then was more of a threat. Both Brezhnev and I, when in office, faced the immediate prospect of conflagration that would deteriorate into a nuclear exchange.

Amira asked Carter, 'Has Trump done anything as president that you support?" When Carter answered, "Well, yeah, he has...." without giving specifics, Amira followed up. But Carter didn’t bite at Amira’s attempt to get him to declare a pro-Trump position, perhaps sensing it would result in two weeks of aggrieved liberal hand-wringing from his admirers, a la Kanye West and Shania Twain:

Would you care to single out any of them?

Well, I don’t want to get into a delineation of the things that I either strongly approve or strongly disapprove.

Amira did tiptoe on one touchy subject, how historians rank presidents: "Do you ever check to see where you're ranked." Carter admitted he does, but lamented "the presidents who have taken our country to war are looked upon as stronger and more able than the ones who tend toward peace. But that doesn't bother me."