Tomasky in New York Review of Books on Trump, ‘The Worst of the Worst,’ Inciting Violence 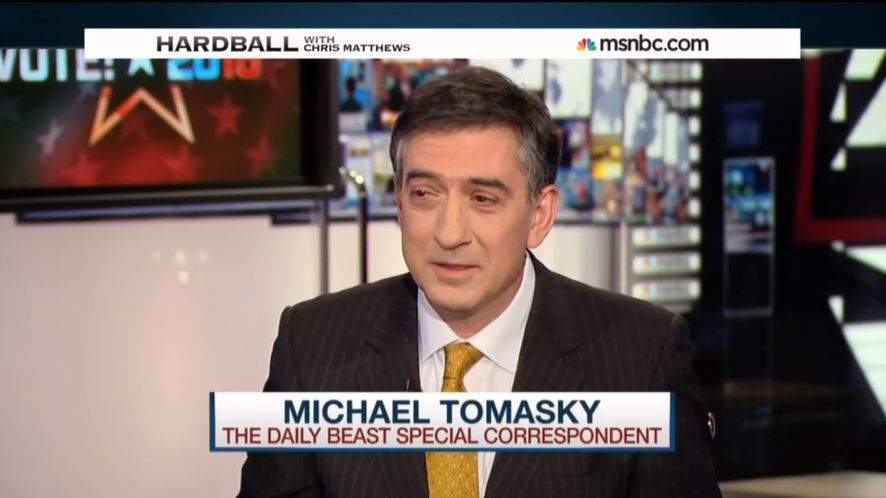 The New York Review of Books February 22 issue prominently displayed journalist Michael Tomasky’s blessing of two virulently anti-Trump books, Michael Wolff’s infamous Fire and Fury: Inside the Trump White House, and the anti-conservative jeremiad Trumpocracy: The Corruption of the American Republican by David Frum. The NYRB’s cover teaser read “Fire in the White House,” the review's title “The Worst of the Worst.”

Tomasky is no stranger to NewsBusters, and his rant in the august pages of NYRB remained true to form, warning of the danger of Trump’s “incitement of private violence to radicalize supporters.”

On January 10, The Washington Post reported that Donald J. Trump passed a milestone that none of his predecessors is known to have attained: just short of the anniversary of his first year in office, he told his two thousandth lie....The path from the first lie to the two thousandth (and now beyond), a veritable Via Dolorosa of civic corruption, has been impossible for even the most resolute citizen to avoid.

After Wolff wormed his way into a front-row White House seat, Tomasky reported: "In no time, he was horrified at what he saw...."

Tomasky was swift to defend Wolff from even liberal criticism, while confessing only that Wolff made "small mistakes, like a Washington Post reporter placed at a meeting he apparently did not attend."

But by and large, Wolff’s reporting has held up....

Tomasky swallowed every unlikely anecdote whole because they matched his anti-Trump animus, and because Wolff “doesn’t do ‘fairness.’”

On election night, when it became clear that he had won, Trump, Wolff writes, seemed paralyzed. Melania, his wife, was crying, and not tears of joy.

The attacks on Wolff haven’t stuck partly because it all rings so true. But I think there is also another reason. Some critics have tried to accuse Wolff of not playing by the standard rules of journalism, by which they mean to insinuate that he’s taken off-the-record material and put it on the record. But no one has produced evidence of this....Wolff doesn’t do “fairness.” He comes to his conclusions, and he lets you know them. He doesn’t tell the other side....

After cheerfully tossing balance over the side, Tomasky buttered up “conservative” David Frum.

....For many years, Frum has been an astute observer of the conservative movement....Conservatives, he writes later, will never abandon conservatism. If the day comes when they conclude that their side can’t win elections democratically, “they will reject democracy.” Trumpocracy warns that the day of reckoning is upon us -- that the liberal democracy that is our heritage “imposes limits and requires compromises,” and that Trumpism is its mortal enemy.

Tomasky warned of the real danger posed by Trump.

The thing to fear from the Trump presidency is not the bold overthrow of the Constitution, but the stealthy paralysis of governance; not the open defiance of law, but an accumulating subversion of norms; not the deployment of state power to intimidate dissidents, but the incitement of private violence to radicalize supporters.

And yet the main purveyors of “private violence” post-election have been Antifa and other left-wing anti-Trump protest mobs.