NYT Mocks Trump-Worshipping Evangelicals With His Visage on Christmas Ornament

Not only did the paper tar all evangelicals with a fringe idea of Trump as holy, it threw in yet more mockery of Fox News (the paper’s favorite target of late) into the mix and gave the screed pride of place at the top of the front page of the Sunday Review. It came accompanied by a vivid graphic, filling two-thirds of the page, of a golden likeness of Trump (like a golden calf, perhaps?) as an ornament on a Christmas tree. 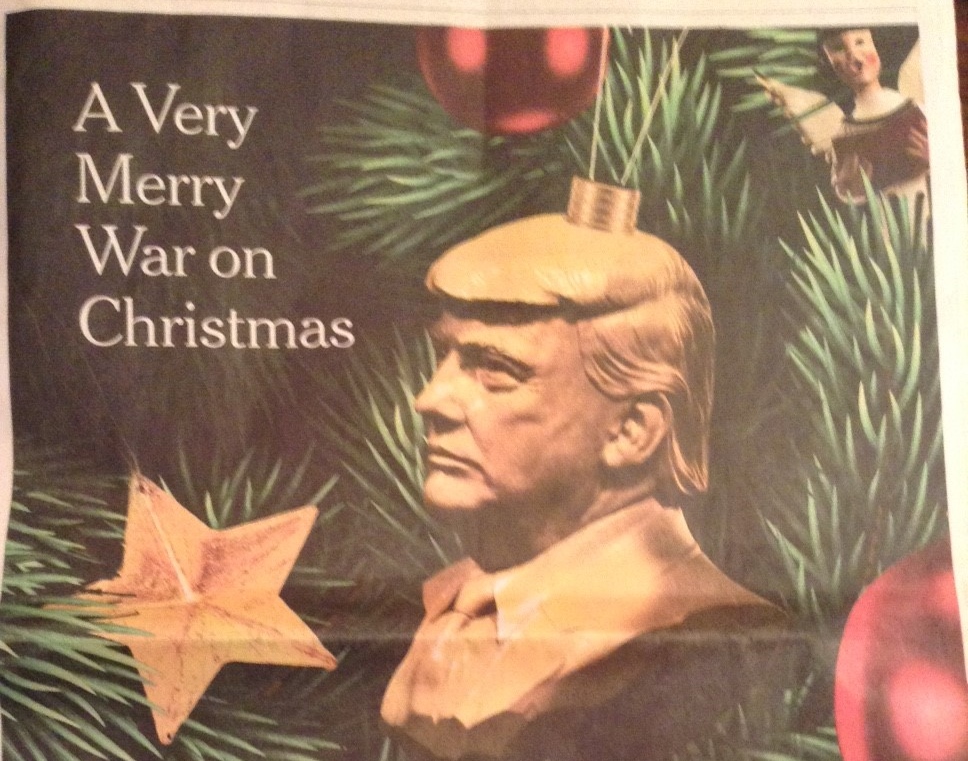 To hear the Christian right tell it, President Trump should be a candidate for sainthood -- that is, if evangelicals believed in saints.

“Never in my lifetime have we had a Potus willing to take such a strong outspoken stand for the Christian faith like Donald Trump,” tweeted Franklin Graham, the son of the evangelist Billy Graham. The Dallas pastor Robert Jeffress sees a divine hand at work: “God intervened in our election and put Donald Trump in the Oval Office for a great purpose.”

Testimonials like this confound critics who label conservative evangelical figures like Mr. Graham and Mr. Jeffress hypocrites for embracing a man who is pretty much the human embodiment of the question “What would Jesus not do?”

But what those critics don’t recognize is that the nationalistic, race-baiting, fear-mongering form of politics enthusiastically practiced by Mr. Trump and Roy Moore in Alabama is central to a new strain of American evangelicalism. This emerging religious worldview -- let’s call it “Fox evangelicalism” -- is preached from the pulpits of conservative media outlets like Fox News. It imbues secular practices like shopping for gifts with religious significance and declares sacred something as worldly and profane as gun culture.

Journalists and scholars have spent decades examining the influence of conservative religion on American politics, but we largely missed the impact conservative politics was having on religion itself. As a progressive evangelical and journalist covering religion, I’m as guilty as any of not noticing what was happening. We kept asking how white conservative evangelicals could support Mr. Trump, who luxuriates in divisive rhetoric and manages only the barest veneer of religiosity. But that was never the issue. Fox evangelicals don’t back Mr. Trump despite their beliefs, but because of them.

Consider the so-called War on Christmas, which the president has made a pet crusade. Mr. Trump has been sharing Christmas greetings since October, well before decorations had even shown up in most stores, when the Values Voter Summit crowd gave him a standing ovation for declaring, “We’re saying ‘Merry Christmas’ again!” He has spent November and December taking victory laps, telling crowds at political rallies in Utah and Florida that “Christmas is back, better and bigger than ever before.”

These days, even though Mr. O’Reilly declared “victory” last year in the War on Christmas, Fox News still gives the supposed controversy wall-to-wall coverage and has folded it into the network’s us-versus-them, nationalist programming. The regular Fox News viewer, whether or not he is a churchgoer, takes in a steady stream of messages that conflate being white and conservative and evangelical with being American.

Sullivan is also troubled by evangelicals’ dissent from her left-wing dogma on abortion and guns.

But if the conservative media has created a category of Fox evangelical converts, it has also influenced the way a whole generation of churchgoing evangelicals thinks about God and faith. On no issue is this clearer than guns.

In fall 2015, I visited Trinity Bible College, an Assemblies of God-affiliated school in North Dakota, to join the conservative evangelical students there for a screening of “The Armor of Light,” a documentary by the filmmaker Abigail Disney. The film followed the pastor and abortion opponent Rob Schenck on his quest to convince fellow evangelicals -- the religious demographic most opposed to gun restrictions -- that pro-life values are incompatible with an embrace of unrestricted gun access. I found Mr. Schenck compelling, and my editor had sent me to see if his target audience bought the arguments.

This worldview is familiar to anyone who has spent time watching Fox News, where every day viewers are confronted with threats to their way of life. It’s also profoundly un-Christian....

Fear and distrust of outsiders -- in conflict with numerous biblical teachings to “welcome the stranger” -- also explain Fox evangelicals’ strong support for the Trump administration’s efforts to bar refugees and restrict travel to the United States from several majority-Muslim nations....

Completing the liberal condesension, it's clear that Sullivan’s Christian pastor source looks down on his flock as sheep...for Fox News.

That disconnect underscores the challenge many pastors face in trying to shepherd congregants who are increasingly alienated from traditional Gospel teachings. “A pastor has about 30 to 40 minutes each week to teach about Scripture,” said Jonathan Martin, an Oklahoma pastor and popular evangelical writer. “They’ve been exposed to Fox News potentially three to four hours a day.”