The New York Times jabbed at Christians and conservatives in two articles Saturday related to museum exhibitions. Emily Cochrane nitpicked the new Museum of the Bible in Washington, D.C., while an art critic looking at a Paris exhibit on the history of Christians in the Middle East suggested the French populist Marine Le Pen was as bad as the jihadists of ISIS.

The Museum of the Bible is the brainchild of Steve Green of Hobby Lobby, a villain in the media (and the Times) for his uncompromising religious stand on refusing to pay for employee birth control under Obamacare. The story led the National section with a headline promising criticism: “Bible Museum, and a Dispute, Years in the Making – For a showcase of religious artifacts, secular criticism.” 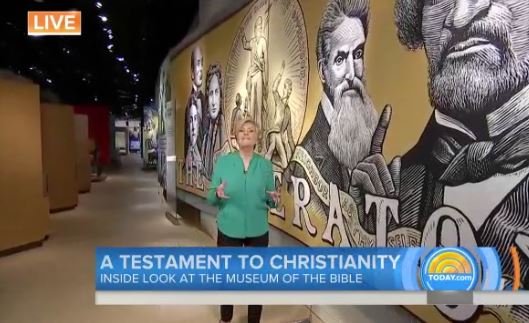 Carol Haun has waited years for a museum dedicated to the Bible. On Friday, her prayers were answered.

Ms. Haun, a Bible study teacher from Charlotte, N.C., was among the first visitors to the Museum of the Bible, which opens to the public this weekend. It houses more than 500 biblical artifacts and texts and the world’s largest private collection of retired Torah scrolls.

Critics say the museum, a nearly $500 million endeavor located a few blocks from the National Mall, represents only a Judeo-Christian perspective, and omits other religions like Islam that draw from the Bible. It is largely funded by Steve Green, the evangelical billionaire and owner of Hobby Lobby, the business name that has become shorthand for the 2014 Supreme Court ruling that corporations with religious owners cannot be required to pay for insurance coverage of some contraception.

But some biblical scholars have said the museum’s exhibits focus too narrowly on American Protestantism, and have omitted parts of the Bible’s history.

“There are a number of prominent omissions that make it clear that it’s not a museum of the Bible as one might imagine it from a secular perspective,” said Joel S. Baden, a professor of the Hebrew Bible at Yale University and author of “Bible Nation,” a book about Hobby Lobby and its investment in Christian projects.

Secular groups have also opposed the museum out of fear that its main mission is politically motivated.

A dedication gala hosted by the museum on Wednesday night, at Trump International Hotel in Washington, was attended by the president’s son, Eric Trump and his wife, Lara, as well as Betsy DeVos, the education secretary. And at Friday’s opening, a statement was read from the Israeli prime minister, Benjamin Netanyahu, who applauded the museum for showcasing “shared values” between the United States and Israel.

Also on Saturday, Jason Farago’s review of a Paris exhibition, Eastern Christians: 2,000 Years of History, managed to mine leftist political points out of the exhibit under the headline “The Other Arab Faith.” The online headline was more provocative: “What Christian Artifacts of the Middle East Can Show Us About Tolerance.”

....Islam is not the only religion in the Arab world, and this autumn the institute, which celebrates its 30th birthday this month, has turned its attention to another faith. “Eastern Christians: 2,000 Years of History,” a vital, thorough, and sometimes astonishingly gorgeous exhibition, explores the birth and transmission of Christianity from Jesus’ death to the present day.

“Eastern Christians” has been billed as the largest exhibition anywhere devoted to the religion in the Middle East, and among its paintings, manuscripts, tapestries, mosaics, ivories and liturgical vestments are several critical loans from Lebanon, Jordan, Israel and Iraqi Kurdistan. It has opened at a grave time for Christians in the Middle East, who have faced appalling violence and even enslavement at the hands of the Islamic State. And it steps into a roiling debate in France, where right-wing politicians, especially, have deplored the plight of Christians in the Middle East -- though not always with humanitarian motives.

After relaying the interesting history of the exhibits, Farago piled on the hostile labels onto those worried about Islamic migration into Europe and the fate of Christians in a hostile Middle East. Whatever problems of Islamic extremism he lays at the feet of politics:

“Eastern Christians” thus confirms that, contrary to the clash-of-civilization palaver spouted by both the Islamic State and the European far right, Christians lived peacefully as a minority in the Middle East for nearly 1,000 years. The accelerated violence of the 20th century has political roots, above all in the collapse of the Ottoman Empire after World War I and the nationalist movements that arose in its wake....

The fate of Christians in the Middle East has become a heated political topic in France -- which, despite the country’s official secularism, has lately wrestled with the place of both Christianity and Islam in public life. In 2014, amid horrible violence in Syria and Iraq, a number of right-wing politicians began adding the Arabic letter “nun” to their Twitter account handles, in solidarity with Christians under threat from the Islamic State. They were not the only ones; the symbol appeared on the accounts of hard-right activists, like the leader of Génération Identitaire, an extremist movement calling for a “reconquest” of Europe from a supposed Muslim takeover.

This year’s presidential election also saw the defeated candidates of the French right and far right invoke eastern Christians, often in the same breath as they disparaged Muslims at home. François Fillon, the former prime minister and Republican candidate, attended a Coptic Easter service and expressed his “affection” for eastern Christians -- just hours after deploring that in a secular country “we no longer say the words identity, France, nation, homeland, roots, culture.” The far-right leader Marine Le Pen, during last year’s election, went further, raising the prospect of French intervention. She insisted on “France’s absolutely essential role in protecting eastern Christians,” which she went on to call a “historic role.”

Farago concluded by again conflating critics of Islam with ISIS:

Taking that pluralism seriously means contesting the new crusades of these eastern Christians’ false friends in the West -- and rejecting sectarian caricatures in favor of universal equality and human freedom. I don’t believe “Eastern Christians” can impart much to the Le Pens of the world, who are as dishonest and as deaf to reason as the jihadists they claim to oppose. It does, though, have a message for the rest of us: Take the past as seriously as the present, and never let extremists set the terms of debate.