New York Times Has No Fun With Fall Movies: ‘White People Just Need to Do Better’

The New York Times’ most doctrinaire movie critics, Manohla Dargis and A.O. Scott, had another tiresome conversation hosted in Sunday’s edition injecting race, class, and feminist politics into the theatre-going experience: “When Even the Movies Can’t Unite Us.”

They examined the fall and winter movie crop and found “while some of the season’s new movies will offer relief from real-world troubles (that’s entertainment!), others will invariably engage the cultural and social division, suspicion and recrimination that afflict the present moment.”

These are the same two critics who berated their own profession for “watching while white” back in January, and this latest effort is another mega-screen expanse of politicization, with particular emphasis on the events in Charlottesville. Some choice excerpts from their long talk:

A.O. Scott's opening bid to court controversy: “Conservatives have long railed against liberal Hollywood, and liberals have bemoaned the racism, sexism and militarism of Hollywood products, but through it all red and blue states have come together to produce plenty of box-office green. Movies are a common treasury for everyone to share. Is that still true? Was it ever?”

Manohla Dargis responded predictably: “The ideal of one nation under a movie theater has obvious appeal, but the dream that American movies are for everybody has always been a self-serving myth of what historically has been a white, male-dominated industry....After Charlottesville, Va., after I caught my breath and calmed down, I wondered how and if American filmmakers would begin more regularly addressing hate groups. They’re certainly not new. One of narrative cinema’s foundational works is D. W. Griffith’s The Birth of a Nation, which celebrates the Ku Klux Klan and became a foundational story for the Klan itself....”

Scott: “When I first saw Green Room, Jeremy Saulnier’s smart and nasty thriller about a rock band that falls afoul of a gang of Nazi punks in the Pacific Northwest, I thought it was maybe a bit hyperbolic. That was in 2016. Now, if anything, the movie seems understated. From the vantage point of 2017, Mr. Saulnier’s white supremacists seem to belong less to an isolated, marginal subculture than to a much larger and more powerful tendency in American society. Your invocation of The Birth of a Nation -- a movie that counted the president of the United States, Woodrow Wilson, among its earliest fans -- is a reminder that white supremacy is part of the heritage of Hollywood, which is to say of the American mainstream..." 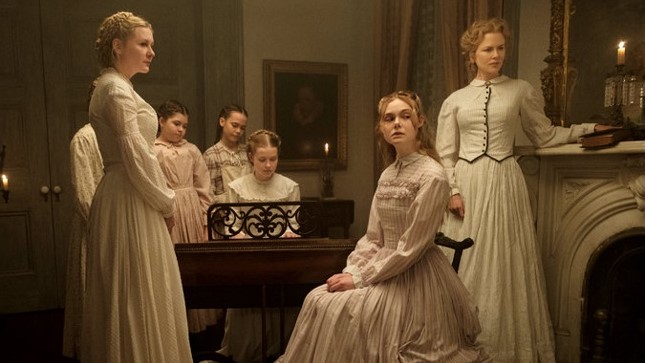 The white Dargis replied with criticism of two female directors for not making the kind of movie she wanted: “Seriously, white people just need to do better -- we do, people at this paper do, the movie industry does. Ms. Bigelow takes on racial violence in Detroit, but while she fills her images with suffering black men, she underscores personal rather than institutional white racism and largely omits black resistance, which is bizarre for a story set in 1967. Like many (most) white directors, Sofia Coppola simply elides race, which makes its absence in her Civil War drama The Beguiled more blatant. That said, each director has revisited an American historical trauma -- one with murdered black men, the other with forgotten white women -- that the mainstream rarely bothers with.”

FYI: The original 1971 Beguiled (directed by Clint Eastwood) had no black characters either.

One slightly interesting exchange occurred when Scott lamented the “anti-democratic” ethos of superhero movies: “Recycling is one thing American movies know how to do. It’s not only with respect to race that Hollywood remains trapped in old ideas and stale forms -- in narrative paradigms that look increasingly dubious in the light of current events. The dominant genre of the 21st century so far has been the superhero movie, with an ethos (and often a fan base) that is fundamentally anti-democratic. The institutions of government (with the occasional and ideologically significant exception of the municipal police department) are venal and incompetent. Their civic functions are better left to rich guys, ultrapowerful mutants or off-the-books paramilitaries made up of industrialists, military officers and demigods. Meanwhile, the public is entirely disempowered, cowering in fear of evil intruders or whipped up into a frenzy by unscrupulous demagogues. The hero alone can save them.”

Dargis rejoinded: “True, except that much of what you’ve described -- the individual hero, the anti-democratic spirit and the failed, at times corrupt government institutions -- have given us some of the greatest American movies ever made. The loner detective, the romantic gangster, the unethical institutions and the neighbors who instantly turn into a mob: Our movies are as contradictory as the people making, watching and reviewing them.”

The Godfather trilogy comes to mind.

For a president who reigned a generation ago, Ronald Reagan pops up surprisingly often when these two start talking about movies, invariably as a villain. It happened again, as Dargis spouted: "In many ways, the superhero movie puts a mystical cape on recycled bits from other popular genres, but with a hero as supersize as the rest of the country. The superhero movie is also the perfect delivery system for free-market ideas -- one that trumpets competition but has led to monopolies -- that Ronald Reagan exalted in his 1981 inaugural address, the one in which he said “government is not the solution to our problem; government is the problem."

Dargis concluded: "We need to open up how we talk about movies, find a way to write about inclusion that isn’t prescriptive but makes room for uncomfortable conversations, including about revered white, male auteurs.”

Watch out Orson Welles, Dargis is coming for you!