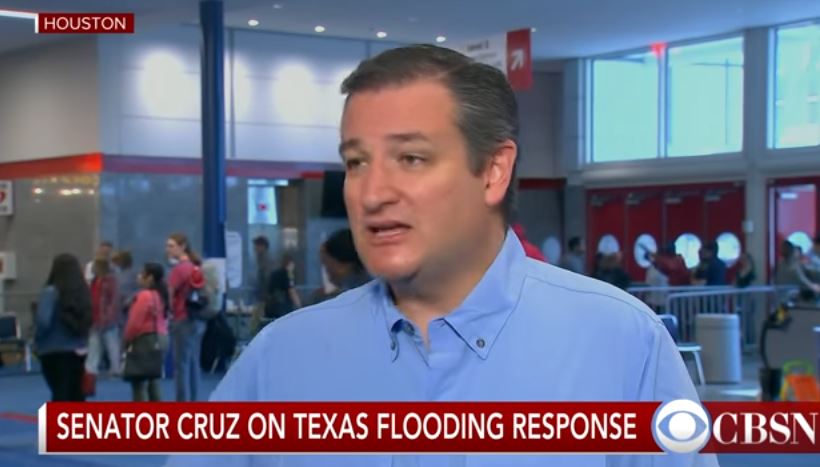 The New York Times featured another jab at Senator Ted Cruz, a reliable target of liberal media loathing, Sen. Ted Cruz of Texas. Reporters have been tittering at the thought of the fiscal conservative being obliged to change his tune to secure help for his home state of Texas, battered by Hurricane Harvey.

NYT reporter Matt Flegenheimer took his turn in Saturday's “Trump and Harvey Push Cruz to Adjust His Style.” The text box: “A fiscal conservative shifts to constituent service when disaster strikes his hometown.” The online headline was slightly smarmy: “Ted Cruz 2.0? Senator Adjusts With Trump in Office and Houston Under Water.”

Senator Ted Cruz of Texas was just getting going, summoning his down-home artillery from the Senate floor -- the faith-flecked tales, the weathered statesman’s gaze, the theatrical pauses deployed not so long ago before caucus-inclined Iowans.

These are not the three nouns most often associated with Mr. Cruz’s congressional life, which has included, among other stands, a vote against a relief measure for storm victims in New York and New Jersey after Hurricane Sandy.

But the forecast has changed. This week, it was time for Mr. Cruz, once perhaps the Capitol’s least compromising conservative, to push a massive federal aid package for his own state.

As he prepares for a re-election race next year, Mr. Cruz is facing perhaps his most meaningful challenge yet: helping to see that millions of constituents -- in his hometown, Houston, and beyond -- get the help they need in the costly years ahead. He is advocating billions in aid after a Senate career often focused on cutting spending and building a national following as an avatar of unbending dogma.

And it was here where another fellow Republican, Senator Lindsey Graham of South Carolina, joked that any homicide committed against Mr. Cruz would go unpunished, so long as the other 99 senators filled the jury pool.

Through less than five years in the body -- before a presidential run that few thought would last so long and after a humbling defeat that has spawned a kinder, gentler “Cruz 2.0,” as his staff frames it -- Mr. Cruz has undergone a handful of evolutions.

But Mr. Cruz’s turn as a unifier has been complicated, as ever, by a yearslong pursuit of conservative purity. After Hurricane Sandy lashed New York and New Jersey in 2012, Mr. Cruz joined more than 20 of his Texas colleagues, including Senator John Cornyn, in opposing a more than $50 billion relief package, arguing that the bill was loaded with projects unrelated to the region’s recovery.

Fact checkers have generally sided against Mr. Cruz’s suggestion that a large majority of the Sandy relief bill was directed at non-storm efforts. And lawmakers in the Northeast, most notably Gov. Chris Christie of New Jersey, a fellow Republican, have taken particular delight in accusing Mr. Cruz of hypocrisy.

Mr. Cruz seems certain that the storm fallout will not test the bounds of his conservative orthodoxy, recalling in the interview that constituents had made a point of requesting federal assistance unencumbered by Washington pork.....

Democrats can be less subtle. Senator Al Franken of Minnesota devoted a full chapter of his recent book to Mr. Cruz, titling the section, “Sophistry.”

“Here’s the thing you have to understand about Ted Cruz,” Mr. Franken writes. “I like Ted Cruz more than most of my other colleagues like Ted Cruz. And I hate Ted Cruz.”

While his hostility to conservative Cruz leaked through, Flegenheimer has shown himself far more accomodating to liberal female Senate Democrats like Elizabeth Warren and Kamala Harris, writing fawning myth-making profiles cultivating them for future glory.