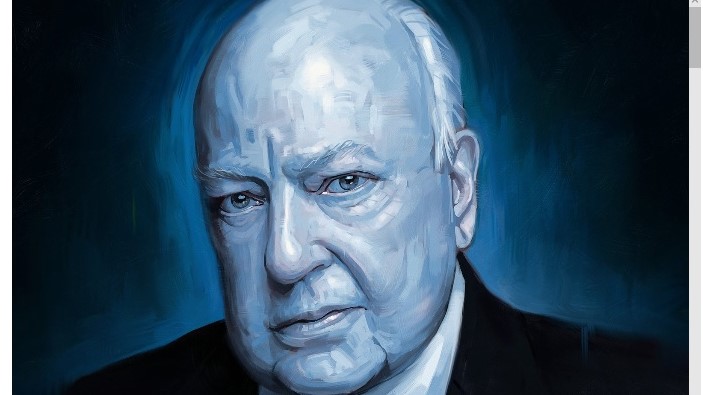 The front page of Friday’s New York Times featured a graceless goodbye to former Fox News chairman and chief executive Roger Ailes (and an insult to Fox News viewers): “A Fighter Who Turned Rage Into a News Empire” by Clyde Haberman. (The online headline wasn’t so harsh: “Roger Ailes, Who Built Fox News Into an Empire, Dies at 77.”)

Roger E. Ailes, who shaped the images that helped elect three Republican presidents and then became a dominant, often-intimidating force in American conservative politics at the helm of Fox News until he was forced out last year in a sexual harassment scandal, died on Thursday morning. He was 77.

Even upon his passing, the Times maintained its hostility toward a man who found a wide and instantly receptive audience for a point of view clearly absent from the mainstream media’s liberal universe.

“Fair and balanced” was Mr. Ailes’s defining phrase for Fox News, along with another slogan: “We report. You decide.” Though routinely mocked by liberal critics, who regarded the network as decidedly unfair and imbalanced, those words amounted to an article of faith for Mr. Ailes, who created Fox News with Rupert Murdoch’s money and guided it for two decades.

“If we look conservative,” he said, “it’s because the other guys are so far to the left.” In his mordant humor, CNN stood for Clinton News Network and CBS for Communist Broadcasting System. What Fox News did, he said, was apply a necessary corrective.

From its debut on Oct. 7, 1996, the network, under his tutelage, did its share of straightforward reporting but also unmistakably filtered major news stories through a conservative lens. Evening programming, which embodied the Fox News brand, was dominated by right-wing commentators like Bill O’Reilly and Sean Hannity, who hurled opinions and vented resentments with a pugnacity that reflected their boss’s own combativeness.

A snotty tone pervaded the piece.

Both speeds were evident at the Ailes-run Fox News. For loyal viewers, it was the network of choice to hear repeatedly about the moral failings of Bill and Hillary Clinton, questions about Barack Obama’s birthplace, doubts about the patriotism of American Muslims, grumblings about the war ostensibly being waged on Christmas, and warnings about “death panels” that would supposedly flourish under the Affordable Care Act, known as Obamacare.

After the terrorist attacks of Sept. 11, 2001, Fox News embraced the American flag as if it were its own, then became an uninhibited booster of the Iraq War and an unabashed critic of those who opposed it.

The network also made itself a haven for Republicans who had fallen from political grace and hoped to restart their careers, among them Newt Gingrich, Mike Huckabee, John Kasich, Sarah Palin and Rick Santorum. Mr. Hannity’s show was effectively a public-relations vehicle for one presidential candidate who made it to the top: Donald J. Trump.

At the end of his tenure, the network had an average daily viewership of 2 million, more than CNN and the left-leaning MSNBC combined. Its audience skewed white, male and old, the median age approaching 70. But they were passionate viewers. Their fidelity produced billion-dollar profits and made Fox News an indispensable component of the Murdoch empire, 21st Century Fox.

Although an Ailes admirer, Mr. Murdoch reluctantly concluded in the summer of 2016 that his news chief had to go after a former network anchor, Gretchen Carlson, brought a lawsuit charging Mr. Ailes with sexual harassment. Her action set in motion a cascade of allegations from women, who reported unwanted groping and demands for sex by him. Some of them described an overall culture of misogyny at Fox News. The scandal enveloped the network’s top star, Bill O’Reilly, whose employment was abruptly ended last month.

That was the campaign of the notorious Willie Horton commercial. It focused on a black man who had raped a woman and assaulted her husband while free on a prison-furlough program in Massachusetts that was supported by the Democratic candidate, Michael S. Dukakis. The ad was widely attacked as blatantly racist, but it appeared to work as a vote magnet for Mr. Bush.

Media reporter Jim Rutenberg had his unflattering say on the front of Friday’s Business Day, “Ailes’s Rise and Fall – By Mining a Divided America, He Upended the News Media.”

Before Donald Trump rode the anger of forgotten (white) America to an “America First” presidency, before Breitbart News became a “platform for the alt-right” and before there were “alternative facts” and dueling versions of reality, Roger Ailes saw a divided country but an undivided news media. And he set out to change it.

Empowered by Rupert Murdoch, who was intent on upending the traditional news media, Mr. Ailes built a network, the Fox News Channel, that would speak to and for those Americans he said were being ignored and disrespected. They were the people who went to Friendly’s for milkshakes, flew the American flag on their car antennas and didn’t see much point in trying to “understand” America’s enemies.

His network would load its prime-time slots with opinionated talk-radio-style personalities while presenting news with an approach he called “fair and balanced,” an indictment of the rest of the news media as excessively liberal. He implicitly injected the news with politics -- and set Fox to the right of its rivals -- even as he professed to be doing the opposite.

Aside from his own personal legacy with women, Mr. Ailes had a record as a television executive who mostly pushed boundaries in one direction -- to the right, and occasionally into the conspiratorial. That was especially so in the Obama years, when Fox News “gave life to stories that became memes on the right -- czars in the White House; the I.R.S. story; Benghazi -- that helped set the agenda for Republicans in Congress,” as the Obama adviser David Axelrod wrote to me in an email.