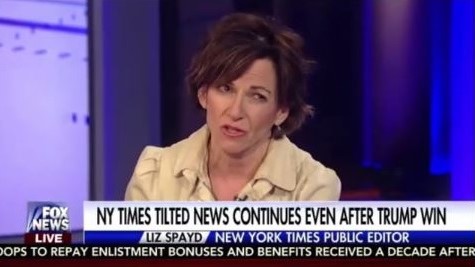 New York Times Public Editor Liz Spayd conducted a rather cagey and testy talk with Adrienne LaFrance of The Atlantic Monthly. Perhaps Spayd sensed that her interlocutor was armed for bear: The Atlantic journalist comes off almost accusatory when she says Spayd, who came over from the Columbia Journalism Review and has had the Public Editor since last July, “has developed a reputation for being more interested in ideological balance, for better and for worse” than her predecessor Margaret Sullivan.

It’s pretty clear that LaFrance and her media colleagues think it’s for the worst and that they were more comfortable with Sullivan, who focused on bean-counting feminism. The headline was a giveaway: “A Conversation With Liz Spayd, the Controversial Public Editor of The New York Times.” The headline was salted with a Spayd quote: “My job is not to win any popularity contests.”

LaFrance linked to liberal criticism (hyperlinks retained in the excerpts below) including Deadspin and Slate and Spayd’s own Times editor, Dean Baquet.

Other journalists, especially, have been vocal critics of Spayd, saying she’s “inclined to write what she doesn’t know,” that her work has become “iconic in its uselessness and self-parody,” and that she is “squandering the most important watchdog job in journalism.” Newspaper editors and public editors frequently disagree, but The New York Times’s executive editor, Dean Baquet, has been blunt: “It was a bad column,” he said of one of Spayd’s articles in January, calling her argument in that instance “fairly ridiculous.” Then again, that wasn’t the first time Baquet challenged a public editor, well, publicly. He had his moments with Margaret Sullivan, Spayd’s predecessor and an industry darling, too. But where Sullivan was lauded for taking on systematic newsroom problems like underrepresentation of women -- both in influential positions at the Times and as subjects in the paper -- Spayd has developed a reputation for being more interested in ideological balance, for better and for worse.

Evidently journalists prefer calls for affirmative action rather than being challenged on their liberal bias. LaFrance forwarded more criticism of Spayd from liberal media critics, while craftily evading the accusation Spayd has made as Public Editor -- that Times journalists often report from the perspective of the liberal bubble.

In her tenure at the Times thus far, Spayd’s critics have blasted her for her “disastrous” defense of false equivalence, for sympathizing with “readers’ chauvinistic gripes about the Times’ sports page,” for validating an alt-right “fringe campaign” aimed at a Times writer, for her characterization of some Times journalists’ tweets as “over the line” in a television appearance with the political commentator Tucker Carlson. (“I should have held back more, not knowing what the context was for the tweets,” she later told Politico. “I think that’s a fair criticism. But I stand by my view that journalists should be careful, sometimes more careful than they are, with what they say on social media.”)

Incidentally, one of the objects of Spayd's criticism on Tucker Carlson's show was Times reporter Liam Stack, whose Twitter feed is indeed a non-stop Trumpalooza of hostility (earlier on Tuesday, Stack forwarded an anti-Trump tweet from Rep. Nancy Pelosi, and another tweet from Buzzfeed reporter Tyler Kingkade mocking Spayd herself).

Spayd happens to be doing the job at a truly remarkable moment in journalism. The news industry is undergoing seismic change. News organizations are fighting for revenue as the ad-based model implodes, and clamoring for readership in a fiercely competitive news environment. Meanwhile, the news environment itself is absolutely chaotic. The president of the United States, embroiled in a controversy that parallels Watergate, is antagonistic to the press. Donald Trump calls journalists the “enemy of the people,” disparages the Times as “fake,” and routinely threatens to cut off press access and enact stricter libel laws.

After a little quibbling over exactly what her job entails, LaFrance provoked:

LaFrance: It sounds like you are aware of some of the criticism of your work.

LaFrance: Well, I wanted to ask you about some of the reaction to one of your most recent pieces, about libel. It seemed to suggest you believe more people should be suing The New York Times.

Spayd: Did you actually read it? Is that what you thought?

The Atlantic interviewer seemed hurt that Spayd wasn’t praising her paper more often, and that some of her positions could be twisted to perceivably (gasp!) support Trump.

LaFrance: I did read it. It seemed strange to me that you suggest that it’s a bad thing if people feel too intimidated to sue the Times for libel, but you don’t offer the suggestion that perhaps the Times’ consistently high journalistic standards are the reason people aren’t suing.

Spayd: I’m not suggesting that. What I’m saying is that I hope that for those who do have a legitimate claim, that they’re not intimidated to pursue a case against The New York Times. It’s a very formidable institution. I’m not encouraging phony or unsubstantial claims. I don’t think if you seriously read that, as opposed to some critique on Twitter, that you’d think that.

LaFrance: But to focus on this at a time when the president of the United States is suggesting tougher libel laws against news organizations, and threatening to sue journalists, do you worry about leaving the impression that you agree with him?

Spayd has attracted controversy among the liberal media during her tenure by daring to suggest on occasion that the Times often functions as a liberal echo chamber.