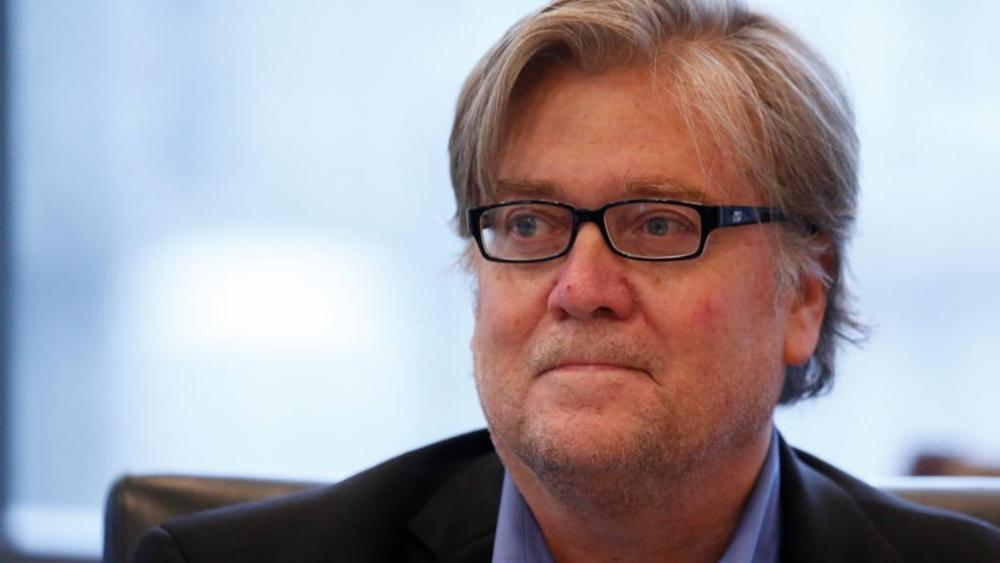 Bannon’s actual 2014 speech, to a Vatican City conference, revealed that, media misleading notwithstanding, he’s not wholly on board with European far-right beliefs and actions. Bannon also called Vladimir Putin and his “cronies” an imperialist kleptocracy. But that didn’t stop the Times from attacking one of the mainstream media’s favorite enemies in the Trump White House.

Those trying to divine the roots of Stephen K. Bannon’s dark and at times apocalyptic worldview have repeatedly combed over a speech that Mr. Bannon, President Trump’s ideological guru, made in 2014 to a Vatican conference, where he expounded on Islam, populism and capitalism.

But for all the examination of those remarks, a passing reference by Mr. Bannon to an esoteric Italian philosopher has gone little noticed, except perhaps by scholars and followers of the deeply taboo, Nazi-affiliated thinker, Julius Evola.

“The fact that Bannon even knows Evola is significant,” said Mark Sedgwick, a leading scholar of Traditionalists at Aarhus University in Denmark.

Evola, who died in 1974, wrote on everything from Eastern religions to the metaphysics of sex to alchemy. But he is best known as a leading proponent of Traditionalism, a worldview popular in far-right and alternative religious circles that believes progress and equality are poisonous illusions.

Evola became a darling of Italian Fascists, and Italy’s post-Fascist terrorists of the 1960s and 1970s looked to him as a spiritual and intellectual godfather.

More important for the current American administration, Evola also caught on in the United States with leaders of the alt-right movement, which Mr. Bannon nurtured as the head of Breitbart News and then helped harness for Mr. Trump.

“Julius Evola is one of the most fascinating men of the 20th century,” said Richard Spencer, the white nationalist leader who is a top figure in the alt-right movement, which has attracted white supremacists, racists and anti-immigrant elements.

Horowitz made sure to include Spencer’s thumbs-up for Bannon.

Mr. Spencer said “it means a tremendous amount” that Mr. Bannon was aware of Evola and other Traditionalist thinkers.

But some of Horowitz’s context put a damper on the breathless headline.

Mr. Bannon, who did not return a request for comment for this article, is an avid and wide-ranging reader. He has spoken enthusiastically about everything from Sun Tzu’s “The Art of War” to “The Fourth Turning” by William Strauss and Neil Howe, which sees history in cycles of cataclysmic and order-obliterating change. His awareness of and reference to Evola in itself only reflects that reading. But some on the alt-right consider Mr. Bannon a door through which Evola’s ideas of a hierarchical society run by a spiritually superior caste can enter in a period of crisis.

A March article titled “An Establishment Conservative’s Guide to the Alt-Right” in Breitbart, the website then run by Mr. Bannon, included Evola as one of the thinkers in whose writings the “origins of the alternative right” could be found.

The article was co-written by Milo Yiannopoulos, the right-wing provocateur who is wildly popular with conservatives on college campuses. Mr. Trump recently defended Mr. Yiannopoulos as a symbol of free speech after demonstrators violently protested his planned speech at the University of California, Berkeley.

The article celebrated the youthful internet trolls who give the alt-right movement its energy and who, motivated by a common and questionable sense of humor, use anti-Semitic and racially charged memes “in typically juvenile but undeniably hysterical fashion.”

Evola eventually broke with Mussolini and the Italian Fascists because he considered them overly tame and corrupted by compromise. Instead he preferred the Nazi SS officers, seeing in them something closer to a mythic ideal. They also shared his anti-Semitism.

John Fund at National Review slammed the Times’ smear, and also pondered where such interest in “the powers behind the curtain” were during the eight years of the Obama administration: “It wasn’t until four years after the passage of Obamacare that a journalist reported on just how powerful White House counselor Valerie Jarrett had been in its flawed implementation. Liberal writer Steven Brill wrote a 2015 book, America’s Bitter Pill, in which he slammed “incompetence in the White House” for the catastrophic launch of Obamacare..... Would that Jarrett had received as much media scrutiny of her role in eight years under Obama as Bannon has in less than four weeks.”

And it’s not the first time the Times has committed an exhaustive cherry-picking in order to smear a right-of-center movement with slurs via obscure personalities, like David Leonhardt’s “clueless” review of Brian Doherty’s book on libertarianism in 2007.