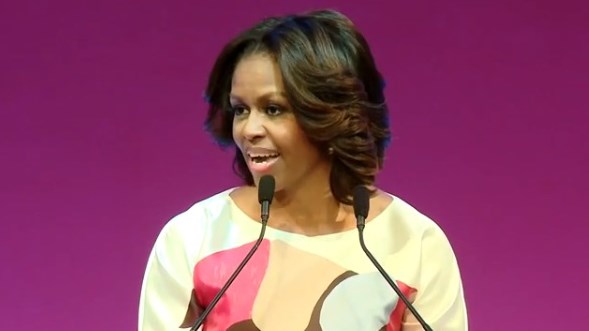 With Hillary Clinton dwelling in defeat, the media must find another liberal female political figure to put on a pedestal. There must be some reason why the New York Times is sodden of late with tributes to departing first lady Michelle Obama.

The front page of the Sunday Review was graced with a half-page photo illustration of first lady Michelle Obama under a story by Jodi Kantor, “Michelle Obama’s Turn.” The text box: “The ‘mom in chief’ charmed late-night hosts. Now is she ready to speak with her fuller voice?” The jump-page text box: “Her approach carried a price: It did not capture her true depth and originality.”

Kantor is author of “The Obamas: The Partnership Behind a Historic Presidency,” which didn’t exactly speak truth to power against the presidential power couple. Kangtor's previous fawn-a-thons disguised as journalistic inquiry, leaned heavily on the “mom-in-chief” cliché, conveniently Michelle Obama’s name for herself.

In Sunday's piece Kantor, who is an actual reporter for the Times, portrayed president-elect Donald Trump as an interloping brute come to wreck the first lady’s house.

On Jan. 20, Michelle Obama will hand her home over to a man who rose to power in part by spreading lies about her husband and intends to pulverize much of his work. If presidential tradition and her own recent conduct are any guide, she will carry herself through inauguration morning with quiet calm and few hints of what she is really thinking. After Donald J. Trump recites the oath of office, a helicopter -- no longer called Marine One, because the president will not be on board -- will lift the Obamas into new lives.

Soon after, Michelle Obama will have a choice to make: Should she start -- or rather, resume -- speaking in public with her fuller voice?

When her husband became the 2008 Democratic nominee for president, Mrs. Obama edited herself. She had to, in the face of unceasing Republican attacks and then the challenge of being the first African-American first lady. Her statements were authentic but limited. She called herself the “mom in chief” and charmed late-night TV hosts in clips that exploded the next day on social media....

This approach carried a price: It did not capture the true depth, originality and directness of Michelle Obama.

In a 2008 interview with The Times, she recalled her years of leading young people through sometimes-painful conversations about race, and made the case for being forthright. “I hate diversity workshops,” she said. “Real change comes from having enough comfort to be really honest and say something very uncomfortable,” she said.

Does Michelle Obama still believe that? In Donald Trump’s America, the hunger among Democrats for her to speak out will be enormous. But she knows better than anyone what that could cost her.

Besides, the best way for Mrs. Obama to preserve her popularity and authority may be to hold back, to avoid jeopardizing what she has worked to build. Even when she is bathed in public admiration, she is the target of revolting attacks -- a prominent Trump supporter recently insinuated she was a male ape -- and speaking out more could provoke worse. As first lady, she used hints, invitations, art, sometimes even clothing to convey her viewpoint. If she mostly avoided controversial topics, her mere presence spoke volumes, and was there really any mistaking the fundamentals of what she believed?

But others who know her predict that with time, Mrs. Obama will find a new voice. Both Obamas, two of the few unifying figures in a fractured Democratic Party, will face enormous pressure to help oppose and rebuild. For years, she has mostly bottled up her critiques of Republicans, but they are scorching, say those who have heard the private version. Some Democrats dream of her running for president in 2020, and though Mrs. Obama and those close to her say the idea is out of the question, the general appetite to hear from her may not be as easy for her to dismiss.

....Michelle Obama cares about representation -- for example, insisting on appearing on the cover of Vogue even when some of her advisers questioned the decision. The world has only one observant, original, wildly popular African-American first lady, and for her to hoard her ideas and views would be a waste.