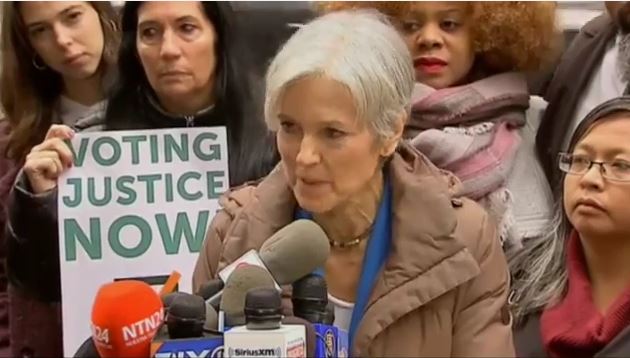 Are U.S. elections reliable? Should the results be universally respected and accepted? Can one challenge the results without being smeared as a threat to society or at least a poor loser? The New York Times can’t make its mind up.

After Donald Trump refused to say he would accept the election results two weeks before the election (when the media was already crowning Hillary the winner), the Times was crammed with stories about the dictatorial dangers of refusing to accept election results. But when liberal anti-Trump protesters engaged in violent protest in the wake of Trump’s surprise victory, there was no problem.

Similarly, the NYT seems fine with Green Party candidate Jill Stein’s expensive recount. No liberal wailing about how the $7 million Stein has raised to fund the recount could have fed a hungry child or helped save the planet, just mildly encouraging reports with no hint of impropriety or threat, in the face of Stein hinting at vote fraud and refusing to accept the results of a free and fair election.

Reporter Steve Eder’s account Tuesday of a Stein-led protest outside Trump Tower, “Call Rises for Recounts Outside Trump’s Door,” featured no criticism of Stein for her assault on the integrity of the election results. Instead, mildly encouraging neutrality reigned:

Ms. Stein, the Green Party presidential nominee and now the leader of the recount campaign, appeared emboldened by an early morning federal court ruling that ordered Michigan elections officials -- over the protests of President-elect Donald J. Trump and his allies -- to begin a recount by noon Monday.

In Pennsylvania, where Ms. Stein’s bid has also faced resistance, her lawyers sued in federal court on Monday, asking a judge to order a recount on constitutional grounds. That move, an apparently last-ditch attempt to review the state’s votes, came after the recount campaign suffered a setback on Saturday when it dropped its election complaint in state court, citing costs.

After finishing a distant fourth place in the presidential election, Ms. Stein has initiated the push for recounts in the two states, as well as in Wisconsin. She has cited concerns about hacking and the reliability of voting machines, prompting legal clashes with lawyers for Mr. Trump and his allies, who see the recounts as a costly and burdensome delay tactic.

Note that Stein’s claims are relayed without moralizing commentary, while Trump’s claims are portrayed as being “without evidence.”

The president-elect, who has raised his own doubts about the election, including his claim without evidence that “millions” of people voted illegally, has chided the recount effort. On Sunday, he went on Twitter to celebrate the setback in Pennsylvania, calling the bid a “Stein scam to raise money.”

The Times can’t abide Republicans’ refusal to concede on the local level either, as shown by the paper’s snotty response to the close results in the governor’s race in North Carolina. Sitting Republican Gov. Pat McCrory conceded Monday to Democrat opponent Roy Cooper, who won by a tally of just over 10,000 votes out of a pool of 4.7 million.

A December 1 Times editorial on McCrory -- a Times target ever since the state’s transgender bathroom imbroglio -- was blunt in its hostility: “North Carolina’s Sore Loser.” Not a whisper about failed Green Party candidate Jill Stein’s expensive presidential recount effort aimed at Pennsylvania, Wisconsin, and Michigan. Instead, the Times was fire and brimstone against McCrory’s “all-out assault on the integrity of the election system.”

Ending an acrimonious stalemate that dragged on for nearly a month, Gov. Pat McCrory, a Republican, conceded in his bid for re-election here on Monday, clearing the way for the ascension of his challenger, the Democrat Roy Cooper, and giving the national Democratic Party a rare cause for celebration.

And Tuesday’s lead editorial, “Why the Lies About Voting Fraud?” was not about Jill Stein’s hopeless-seeming recount, but about the paper’s Public Enemy #1, the president-elect:

The long-running Republican war against the right to vote has now gone national at the instigation of President-elect Donald Trump, who has promoted the lie that millions of illegal votes were cast in the presidential election.

There is not a scintilla of evidence for this claim, and Mr. Trump’s own lawyers have admitted as much, stating in a court filing opposing a recount in Michigan that “all available evidence suggests that the 2016 general election was not tainted by fraud or mistake.”

Yet one after the next, leading Republicans are spreading this slander of American democracy, smoothing the way to restrict voting rights across the country.

This is how voter suppression efforts start. First come the unverified tales of fraud; then come the urgent calls to tighten voter registration rules and increase “ballot security,” which translate into laws that disenfranchise tens or hundreds of thousands of qualified voters.

Undermining the integrity of the electoral process and making it harder to vote is threatening to all Americans, regardless of party. The cynical Republicans now in power figure that all they have to do is fool the public long enough to win the next election. It’s outrageous, but it’s hard to see why they would stop when lying has gotten them this far.

What was that guff about accepting election results again?