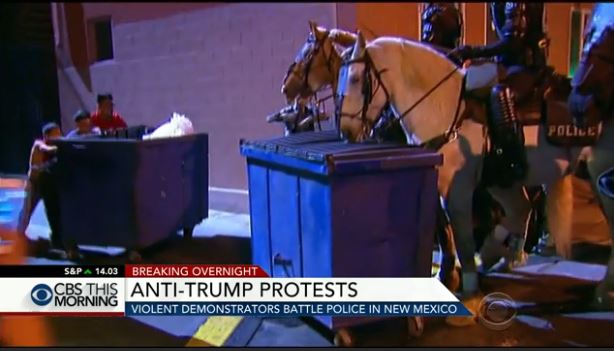 The New York Times filed some disturbing facts about what happened outside a Trump rally in New Mexico: “Protesters Throw Rocks at Police Horses Outside Trump Rally in Albuquerque.” Ashley Parker and Chris Mele led with a brief description of violent anti-Trump protesters:

Protesters outside a rally for Donald J. Trump in Albuquerque threw rocks at police horses and lighted fires on Tuesday night, according to the police and postings on social media.

They then immediately downplayed the violence:

The Albuquerque police said on Twitter that contrary to reports, no tear gas had been deployed outside the rally venue, the Albuquerque Convention Center.

Of course, this being the Times, the reporters suggested Trump’s rhetoric was just as violent:

The raucous scene outside the convention center was matched by Mr. Trump’s fiery tone inside the rally, which protesters disrupted less than three minutes after he started speaking.

But the troubling story of left-wing protestor violence against police and property -- a story that would seem to justify the anxieties of Trump supporters and make his opponents look bad -- didn’t make the print edition. Instead, the reporting from New Mexico that actually made it into print was about Trump slamming the state’s Republican governor Susana Martinez, under a questionable, ethnically loaded headline: “Trump Takes a Female, Hispanic Governor to Task.” (The online headline at least made a cursory attempt at wit: “Donald Trump Gives Gov. Susana Martinez a Poor Performance Review.”)

Donald J. Trump is unlikely to win the general election unless he improves his dismal standing among Hispanics and women. But his efforts to win over those two crucial constituencies is off to a rocky start.

On Tuesday night, Mr. Trump purposefully attacked Gov. Susana Martinez of New Mexico, who in addition to being the most prominent Hispanic woman in American politics, also happens to be the chairwoman of the Republican Governors Association.

Appearing at a campaign rally in Albuquerque, the largest city in Ms. Martinez’s state, Mr. Trump unleashed a blistering assault on the governor, who skipped the event, by saying she was “not doing the job.”

He faulted her by falsely asserting she was allowing Syrian refugees to settle in the state, and blamed her for Albuquerque’s unemployment numbers as well as the increase in the number of New Mexico residents on food stamps.

Speaking for more than an hour Tuesday night here, Mr. Trump also took aim at Hillary Clinton and Senator Elizabeth Warren of Massachusetts. He called Ms. Warren “Pocahontas,” a derogatory nickname because of her unsubstantiated claims during her 2012 Senate run that she has Native-American ancestry.

If Mr. Trump was echoing the views of many in his own party, he was also demonstrating why polls show him as so unpopular among women.

The Times took full advantage hypothesizing how Trump’s attack on Martinez could hurt him.

If his image does not improve among Latinas, he will find it difficult to carry swing states with larger Hispanic populations such as Florida and Colorado, let alone more Democratic-leaning states such as New Mexico. Mr. Trump says he expects to do well with Hispanics, but has upset many of them with his promise to build a wall along the United States-Mexico border, as well as his comments that some Mexicans are criminals and rapists.