NYT's Classless Krugman on Paris: 'Nothing... Suggests' We Should 'Change How We See the World'

New York Times columnist Paul Krugman, economist turned Democratic hack, displayed his usual lack of class in the face of human tragedy in a series of nytimes.com blog posts, turning the Paris massacres by radical Islamists into personal attacks on Republicans, while also suggesting that in the grand scheme of things, maybe they weren't that big a deal after all, except perhaps as a small economic boost, and that "nothing...suggests" we should "change how we see the world."

In "Fear and Friends," posted on Sunday, just two days after the attacks, Krugman was already working to downgrade the atrocities to suggest that really, nothing has changed. 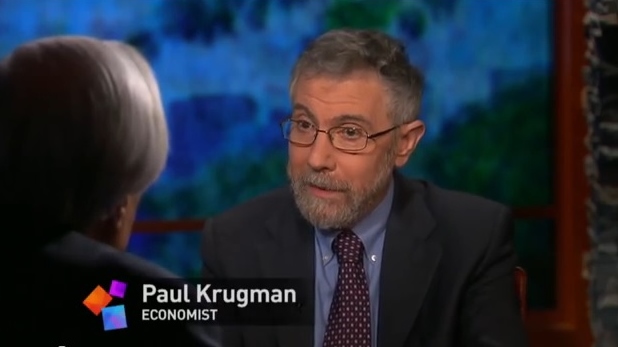 The news from Paris was horrifying, and deserved a break in the usual round of commentary, but surely nobody who has been paying attention was completely shocked. We know that there are jihadists out there, and even the best efforts at prevention will fail sometimes. We’ll have to see how this fairly elaborate plot went undetected, but really nothing about the story so far suggests that it should fundamentally change how we see the world.

We also knew that the usual suspects would react badly -- but there, I think, there has been a surprise on the downside. As far as I can tell, nobody in the GOP field wants to say anything positive about the strength of Western democracy, or make a remark about the nature of a cause that has nothing going for it except the ability to kill innocent civilians....

And of course, he credited the Democrats, "who had a bizarrely rational and well-informed debate. By today’s standards, that’s positively un-American."

Tuesday's post "Terrorists and Aliens" was Krugman's tribute to his own half-serious Keynesian suggestion, much mocked, that a fake space alien attack would rev up the world economy, just like the Second World War had done.

The Great Depression wasn’t ended by the intellectual victory of Keynesian economics; in fact, the publication of The General Theory was followed by the great mistake of 1937, when FDR tried to balance the budget too soon and send the U.S. economy into a severe recession. What put a decisive end to the slump was World War II, which led to deficit spending on a scale that was politically impossible before.

This story is what led me to facetiously suggest that we fake a threat from space aliens, to provide a politically acceptable cover for stimulus.

(Krugman indeed went on CNN in 2011 to joke: "If we discovered that, you know, space aliens were planning to attack and we needed a massive buildup to counter the space alien threat and really inflation and budget deficits took secondary place to that, this slump would be over in 18 months.")

Bracing for a backlash, Krugman pre-emptively labeled any criticism of his new off-tone commentary "stupid."

OK, obligatory disclaimer that will do no good in the face of the stupidity. I am NOT saying that terrorism is a good thing, just as those of us who point to wartime fiscal stimulus aren’t saying that World War II was a good thing. (Don’t kill baby Hitler -- we need him to justify stimulus!) We’re just trying to think through some side effects of the atrocity.

In Tuesday's "The Farce Is Strong in This One" (hardy har har) Krugman went after conservative politicians and opinionmakers:

It took no time at all for the right-wing response to the Paris attacks to turn into a vile caricature that has me feeling nostalgic for the restraint and statesmanship of Donald Rumsfeld and Dick Cheney.

Marco Rubio says that we have to denounce radical Islam -- as opposed to jihadists -- because of Hitler; after all, making Islam the rhetorical equivalent of Nazism is just the right thing to win support from the world’s 1.6 billion Muslims.

Niall Ferguson says that a terrorist attack on a couple of sites in a huge modern metropolis by a small number of gunmen is just like the sack of Rome by the Goths.

This is what the reasonable wing of the modern right looks like.

For one thing, who exactly are the serious candidates on national security? Jeb!, who thinks that a relative handful of terrorists can destroy the West, one rock concert at a time? Rubio, who mumbled something about a clash of civilizations?

For another, pretty much the same people claiming that it’s time to get serious are attacking Democrats for … not using the right catchphrases, out of petty concerns like trying not to insult a whole religion. Say it loud and proud: radicalIslamradicalIslamradicalIslam. See? Terrorism defeated.

Finally, remember how we got serious after 9/11?

At that, Krugman displayed a photo of President George W. Bush in a flight suit, smugly sealing his argument.

If Krugman's goal was to look partisan and crass in the face of mass murder, well, "Mission Accomplished."