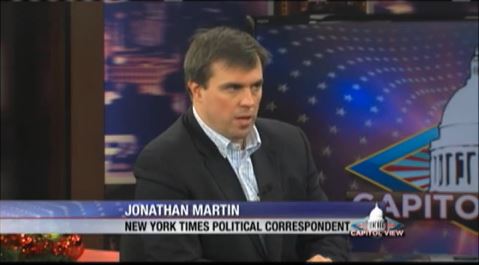 Jonathan Martin, perhaps the most condescending of the New York Times stable of GOP-hostile political reporters, eagerly condemned the entire Republican presidential field as childish and divisive in a Tuesday story, "Without Calming Voice, G.O.P. Is Letting Divisive Ones Speak on Muslims."

Reacting to a critical comment by candidate Dr. Ben Carson about the possibility of a Muslim presidency, Martin took the opportunity to smear the Republican Party en masse, noting that "For Democrats, there is an opening to use the criticism of Islam to portray Republicans as intolerant, reinforcing an image that has damaged the party’s brand."

When Ben Carson said on Sunday that he would not want to see a Muslim elected president, he did not just reignite a volatile conversation about the role of Islam in American life -- he also exposed another fissure between many Republican leaders and elements of the party’s grass roots.

In the years since President George W. Bush sought to separate the Islamic extremists behind the Sept. 11 attacks from the millions of practitioners of what he called a religion of peace, many in his party have come to reject the distinction.

Martin's trademark condescension came through, lamenting the lack of mature Republicans to temper the hothead "impulses of the rank-and-file."

It is hardly the only point of disagreement between Republican leaders who are determined to reorient the party to win in a changing country, and activists who are uneasy about what they see as threats to their way of life. But the debate over Islam is particularly worrisome for Republicans because it so vividly highlights the vacuum that has been created by the absence of a unifying leader who can temper the impulses of the rank-and-file.

For Democrats, there is an opening to use the criticism of Islam to portray Republicans as intolerant, reinforcing an image that has damaged the party’s brand.

While Muslims are viewed more skeptically by the American public than are members of any other faith, Republicans are especially uneasy about Islam. A Pew survey last year asking individuals to rate, from 1 to 100, their feelings about religious groups found that Muslims only averaged 33 percent among Republicans and Republican-leaning voters -- far below other faiths.

But concern about Islam extends more broadly on the right. Despite President Obama’s release of his birth certificate, false claims about his place of birth and faith persist among some conservatives. A full 60 percent of Republicans said they viewed Islam unfavorably in a 2013 New York Times-CBS poll.

Those views were on display last week in New Hampshire when Donald J. Trump replied that he would be “looking at that” when a man attending a Trump town hall meeting called Mr. Obama a Muslim and said the country needs to “get rid of them.”

Mr. Trump’s reaction was strikingly different from that of Senator John McCain, who, in the 2008 presidential campaign, was confronted by a similar voter. “He’s a decent family man, citizen, that I just happen to have disagreements with on fundamental issues,” Mr. McCain said to a woman who called Mr. Obama “an Arab.”

Trump responded on Twitter that he was not "morally obligated to defend the president every time somebody says something bad or controversial about him."

Martin showed some sudden respect for George W. Bush, at least in comparison to the current crop of GOP hopefuls.

It was also far removed from Mr. Bush’s response in the aftermath of the Sept. 11 attacks. Fourteen years to the day before Mr. Carson’s comments on Sunday on NBC’s “Meet the Press,” Mr. Bush, in an address to a joint session of Congress, drew a distinction between adherents of radical Islam and peaceful Muslims.

He was, aides recall, concerned about the safety of American Muslims in the tumultuous days after the assault on New York and the Pentagon. But he also wanted to send a longer-term message abroad that America intended to strike back only at jihadists.

“What’s dangerous about what he said is that it sends the wrong message to the rest of the world,” said Tony Fratto, a former press secretary to Mr. Bush. “That somehow the actions we take for very legitimate national security reasons have anti-Muslim roots. We’ve worked so hard to try to make it clear that that isn’t the case. But each time somebody does this kind of thing, it makes it harder.”

Candidates vying to win support in a Republican primary are not much interested in such matters of diplomacy.