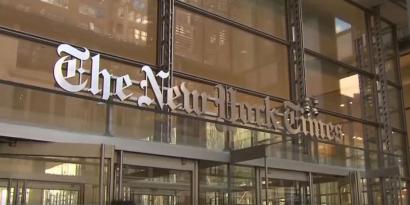 New York Times editorial page editor Andrew Rosenthal appeared on the nytimes.com "Inside The Times" podcast and insulted every Republican candidate in nasty, personal terms, throwing around the words "idiot" and "xenophobic" and insulting Justice Clarence Thomas in stark racially loaded fashion. Rosenthal then said the 1988 George H.W. Bush campaign used the Pledge of Allegiance as an issue "deliberately and specifically intended to remind Americans that Michael Dukakis was of Greek descent and therefore suspect."

Over the years Rosenthal has repeatedly revealed himself to be a charmless and classless critic of conservatives, and not all that up on current events.

And in addition to that there is in fact a very powerful current in parts of this country, and that includes the Republican primary electorate -- particularly in the South and the Midwest, which is where this stuff is happening -- of resentment among white people toward minorities. It's a thing. And the Republicans have been fanning fear, yeah, for a long time now, but they've also been fanning this resentment, the idea that you have a legitimate grievance, if you're a white person against black people, if you're a man against women, if you're not Hispanic against Hispanics."

Rosenthal again, about four minutes in, on Donald Trump: "He's a straightforwardly racist, sexist, homophobic, and xenophobic person. Unless he's just making it up and doesn't believe it but why would he say those things?"

An exchange about five-and-a-half-minutes in:

Lehman: "And what about the Republicans? How do you think they could wrestle the political conversation away from Trump and his xenophobic ideas?"

Rosenthal: "Well, they might come up with a candidate that can actually run for office without making an idiot of himself, they don't seem to have able to have done that yet, though Carly Fiorina did a good job, but now Fox is trying to ban her from the next debate."

Seven minutes in, after quoting Bill Maher approvingly on he used racial insinuation to smear Justice Clarence Thomas and the 1988 Bush campaign (proving once and for all that the left will never forgive George H.W. Bush for the Willie Horton ad):

It's strange and you can only explain it through fear and kind of rigid ideology. It was like, Clarence Thomas, talking about original intent. By the original intent of the Constitution, there's no possible way on God's green earth that Clarence Thomas would be sitting on the Supreme Court of the United States! He would be he wouldn't be a citizen, he wouldn't have a vote. There is no logic to it, there is no intellectual underpinning, it's all about emotion. And the Republicans started doing this a long time ago. It really peaked as an art form, in a twisted way, in 1988. Lee Atwater, when he was running Bush's campaign against Michael Dukakis, and it was all about xenophobia and racial fear. And it was so bad that actually Lee Atwater you know expressed on his deathbed regret for having done it. The whole argument during the '88 campaign about the Pledge of Allegiance was deliberately and specifically intended to remind Americans that Michael Dukakis was of Greek descent and therefore suspect.

Here's a rundown of Rosenthal's more recent rundowns of Republicans from his "Taking Note" blog at nytimes.com.

On September 4, he mocked Ted Cruz for his stand on Kim Davis, the now-famous county clerk Kentucky who went to jail after repeatedly refusing to issue marriage licenses to gay couples.

On September 2, Rosenthal mocked the intelligence of four Republicans while dismissing Dr. Ben Carson's groundbreaking achievements in surgery. (And since when did liberals embrace IQ as a racially unbiased measure of intelligence?)

No less a disinterested party than his campaign manager, Barry Bennett, declared to The Washington Post’s Chris Cillizza, that “DBC” (that’s Dr. Ben Carson) “is the smartest man I have ever met.”

Well, that wraps that up. (Although it may have been a low bar for Mr. Bennett, considering that previous clients who paid him to praise them included Rick Perry, Liz Cheney and Rob Portman. Not exactly a Mensa gathering.)

Wherever did he find the time to separate those conjoined twins that he talks about all the time?

That was an indisputable medical achievement, but is about as irrelevant to being president of the United States as Mr. Trump’s deep experience running casinos into the ground.

On August 27 it was Louisiana's Republican governor's turn to be spat on: "Insane Things Republicans Say: Bobby Jindal Edition."

Political candidates who are trying to stave off what seems like inevitable defeat often do the kinds of desperate things that ordinary mortals would find too humiliating to contemplate.

Take Bobby Jindal of Louisiana, one of the current and former governors with bad records of managing their own states who are now running for the Republican nomination by claiming they will manage the country really well.

Mr. Jindal chose for some inexplicable reason to send President Obama a hectoring letter demanding that he not mention the environment when he comes to New Orleans on Thursday to mark the 10th anniversary of an environmental calamity that nearly destroyed the city – Hurricane Katrina.

Maybe Mr. Jindal should have heeded his own advice and not injected the divisive right-wing agenda of opposing sound environmental policies into this important time of remembrance.

Big talk from a man who hypocritically politicized a gun tragedy hours after the event.