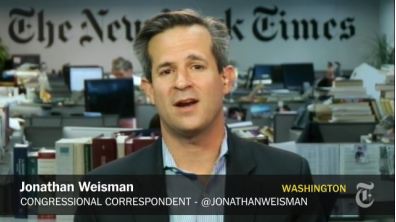 In Tuesday's paper, New York Times reporter Jonathan Weisman made gratuitous (dare we use the lazy liberal term "problematic"?) references to the Jewish religion of some Democratic congressional opponents of the Obama administration's controversial nuclear deal with Iran, which conservatives deride as unenforceable and dangerously naïve.

But there was no such hesitation when it came to pushing Obama's deal with Iran, which Israel and most U.S. conservative strongly oppose and the Times strongly favors. Weisman even promoted a whispering campaign suggesting that Eric Feldman, chief of staff for Michigan Democratic Sen. Gary Peters is too pro-Israel to be objective on the matter.

With Senator Harry Reid’s undiluted endorsement Sunday of the Iran nuclear accord, followed by Senator Debbie Stabenow of Michigan on Monday, supporters of the deal are closing in on the number they need to ensure it goes into force.

But the ranks of undecided Democrats are still full of quirks and wild cards, from a freshman senator from Michigan whose closest aide has a pro-Israeli government bent to lawmakers inclined toward avoiding military conflict but from states where any position in support of President Obama is toxic.

Weisman found the opposition to the Iran accord "vexing" and "politically charged," terms the Obama administration would surely agree with.

More vexing still, Democratic leaders worry that Senator Mitch McConnell of Kentucky, the majority leader, could allow a resolution of disapproval of the deal to be loaded with politically charged amendments, such as making it contingent on Iran’s recognizing the State of Israel or releasing American prisoners.

The aim now for Democrats is not just to sustain a veto but to block Republicans from even passing a motion of disapproval. To do that, Republicans need to be unified and also win six Democratic defections. So far, the only Senate Democrats to reject the accord are Mr. Schumer and Robert Menendez of New Jersey.

Senator Gary Peters, a Michigan freshman, remains mum, even after Representative Sander Levin of Michigan, the longest-serving Jewish House member, endorsed it, as did his respected brother, the recently retired chairman of the Senate Armed Services Committee, Carl Levin. Democrats are concerned that Mr. Peters’s chief of staff, Eric Feldman, who many Democrats said strongly supports the Israeli government, may be nudging him toward opposition.

Senator Ron Wyden, a mercurial member on many issues, is being buffeted between his Jewish roots and urban Oregon’s liberal voters already angry about his instrumental role in passing free trade legislation. His parents fled Nazi Germany.

The last, most important voice might be that of Senator Benjamin L. Cardin of Maryland, the ranking Democrat on the Foreign Relations Committee and a religious Jew with his eye on Israeli opinion. But Mr. Cardin also tends toward optimism on diplomacy, and many Democrats believe he will come out in favor of the nuclear accord -- possibly at the last moment.

Weisman, writing with Jennifer Steinhauer, had raised eyebrows earlier with aggressive characterizations of opponents of the Iran deal as Jewish in an August 8 story announcing Sen. Charles Schumer's opposition to the deal.

The decision by Senator Chuck Schumer of New York to oppose the Iran nuclear deal has rattled the Democratic bulwark around the accord, emboldened the deal’s opponents in both parties, and set off a wave of condemnation from liberals for the man who hopes to lead Senate Democrats in the next Congress.

Mr. Schumer, the third-ranking Democrat in the Senate and the likely Democratic leader beginning in 2017, said on Thursday night that he opposed the deal, citing concerns about the inspection regime, provisions to reimpose sanctions if Iran cheats, and Tehran’s freedom after a decade to possibly pursue a nuclear bomb. In quick succession, two other prominent Jewish Democrats, Representative Eliot L. Engel of New York, the ranking Democrat on the Foreign Affairs Committee, and Mr. Sherman announced their opposition.

Republicans in Congress are almost universally opposed to the deal, which Prime Minister Benjamin Netanyahu of Israel has called a threat to the security of his country, but resistance to the accord among Democrats is concentrated in two heavily Jewish regions, the New York City area and South Florida. In recent weeks, Representative Steve Israel of New York, the most senior Jewish Democrat in the House, and Representative Nita M. Lowey of New York, the ranking Democrat on the House Appropriations Committee, came out against the deal, as did Representative Albio Sires, who represents the New Jersey suburbs of New York. They joined two other New York Democrats, Kathleen Rice and Grace Meng, in opposition.

The "Jewish" labeling carried over to supporters as well.

Mr. Schiff said in an interview that New York sensitivities were the result of the attacks of Sept. 11, 2001, and a visceral fear that loosening sanctions on Iran could result in financing for terrorism. “There was no one in their constituency who had not been directly impacted by the attacks of 9/11,” Mr. Schiff said. “It had a real impact in the New York Jewish community.”

But Mr. Schiff, a Southern Californian who is Jewish, said that, on balance, the deal was the best way to keep Iran from obtaining a nuclear weapon.

In addition to being the third-ranking Democratic leader in the Senate and a major party fund-raiser, Mr. Schumer is Congress’ most influential Jewish member. His choice could affect the votes of other lawmakers who are wavering. Whether to support the nuclear deal is the most consequential foreign policy decision facing lawmakers since the Iraq war and opponents are waging a fierce multi-million dollar campaign to defeat it.