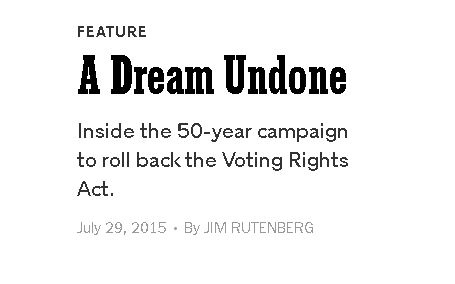 The New York Times Sunday Magazine cover story by political correspondent Jim Rutenberg, "A Dream Undone -- Inside the 50-year campaign to roll back the Voting Rights Act," is a 10-part, 10,000-word doorstop (issued with the baleful threat "The first in a series") comparing current attempts to stop voter fraud as a return to Jim Crow, with particular focus on North Carolina. Rutenberg also relays more Times misinformation about Ronald Reagan's 1980 campaign and his appeal to "states rights" in Mississippi.

It opens with a story from Henry Frye, first black chief justice of the North Carolina Supreme Court and the victim of a Jim Crow "literacy test" in 1956.

In the decades that followed, Frye and hundreds of other new black legislators built on the promise of the Voting Rights Act, not just easing access to the ballot but finding ways to actively encourage voting, with new state laws allowing people to register at the Department of Motor Vehicles and public-assistance offices; to register and vote on the same day; to have ballots count even when filed in the wrong precinct; to vote by mail; and, perhaps most significant, to vote weeks before Election Day. All of those advances were protected by the Voting Rights Act, and they helped black registration increase steadily. In 2008, for the first time, black turnout was nearly equal to white turnout, and Barack Obama was elected the nation’s first black president.

Since then, however, the legal trend has abruptly reversed. In 2010, Republicans flipped control of 11 state legislatures and, raising the specter of voter fraud, began undoing much of the work of Frye and subsequent generations of state legislators. They rolled back early voting, eliminated same-day registration, disqualified ballots filed outside home precincts and created new demands for photo ID at polling places. In 2013, the Supreme Court, in the case of Shelby County v. Holder, directly countermanded the Section 5 authority of the Justice Department to dispute any of these changes in the states Section 5 covered. Chief Justice John Roberts Jr., writing for the majority, declared that the Voting Rights Act had done its job, and it was time to move on. Republican state legislators proceeded with a new round of even more restrictive voting laws.

All of these seemingly sudden changes were a result of a little-known part of the American civil rights story. It involves a largely Republican countermovement of ideologues and partisan operatives who, from the moment the Voting Rights Act became law, methodically set out to undercut or dismantle its most important requirements. The story of that decades-long battle over the iconic law’s tenets and effects has rarely been told, but in July many of its veteran warriors met in a North Carolina courthouse to argue the legality of a new state voting law that the Brennan Center for Justice at the New York University Law School has called one of the “most restrictive since the Jim Crow era.” The decision, which is expected later this year, could determine whether the civil rights movement’s signature achievement is still justified 50 years after its signing, or if the movement itself is finished.

And it's all Reagan's fault. Rutenberg actually divided his novella-length story to put the year of Ronald Reagan's election as a dire turning point in the history of civil rights. (Elsewhere Rutenberg at least accurately labeled the racists of the Jim Crow era as Democrats.)

Democrats throughout the South responded to the growing influence of black legislators with a brutal effort to suppress the black vote, enforced by the Ku Klux Klan and its many paramilitary imitators, who kept blacks from election polls at gunpoint and whipped or lynched many who resisted. The Southern Democrats ran on an open message of white supremacy and quickly retook statehouses, city halls and courthouses throughout the South. Within 15 years of the Civil War’s end, Reconstruction was just a memory. What followed was deconstruction: the era of Jim Crow, the poll tax, the literacy test, double primaries and a host of other mechanisms that blocked the black vote. For decades, most black citizens in the South had no practical right to vote.

Skipping ahead in the article, Rutenberg bashed Nixon's "hard-edge, race-based....Southern strategy" of electioneering, even though Nixon actually expanded affirmative action in the federal government and imposed racial quotas. Meanwhile, "progressive" Democratic President Woodrow Wilson -- who re-segregated the federal civil service, hosted a private screening of D.W. Griffith's infamously racist film "Birth of a Nation," and as president of Princeton found the admission of black students there "unwarranted" -- went unmentioned in Rutenberg's 10,000 words.

Then there was some typical Times misinformation about Ronald Reagan's 1980 campaign launch in Philadelphia, MS:

As for white voters, the Southern strategy worked. Helms won his next two races and provided a vast Southern support network for Ronald Reagan’s 1980 campaign team, which used many of the racial dog-whistle slogans that Helms had made a regular part of his campaign arsenal. In one of Reagan’s first campaign events following his nomination, he went to the Neshoba County Fair in Mississippi -- near where the Klan killed three civil rights workers 16 years earlier -- and declared, “I believe in states’ rights."

The 1980 election may have put Reagan in office with an ominous nod to “states’ rights,” but in that same year black voter registration reached 60 percent, black politicians were slowly but steadily winning public office and efforts by ideologues like Helms to undermine the Voting Rights Act had not been able to halt the progress it protected.

Reagan did visit the Neshoba County Fair, a common stomping ground for politicians, on August 3, 1980, but stuck mostly to talking about the failures of President Jimmy Carter, with one line about states rights. (Strangely, back in 1980 the Times covered Reagan's appearance without mentioning the three slain civil rights workers.) Reagan then went to New York and spoke to the National Urban League and dedicated much of his first campaign week to making appeals to blacks.

[Conservative activist Edward] Blum, slightly built and wearing khakis and a Polo fleece, was sitting in his home office, his golden retriever barking outside at a passing kayaker. The scene was almost as far removed from the voting battlegrounds of the American South as could be imagined. And yet it is from this bucolic Northeastern setting that Blum has mounted some of the fiercest attacks on civil rights legislation to date...

Rutenberg fawned over Obama's partisan former attorney general, Eric Holder, and let him excuse his failure to vigorously prosecute an actual case of voter intimidation by the New Black Panther Party in Philadelphia, where two men in paramilitary apparel, one carrying a club and calling whites “crackers” who would soon be “ruled by the black man.”

Rutenberg seemed untroubled, as was Holder, who had the gall to put the blame on the outgoing Bush administration:

Holder had rehired several attorneys and analysts who left the voting section during the Bush years, and the newly rejuvenated civil rights lawyers and other staff members advocated reducing the charges in the case. The reasons were straightforward. No witnesses had come forward to say they were dissuaded from voting; the New Black Panther Party publicly disavowed the men on its website; one of the men was a certified poll watcher.

Looking back on it now, Holder said he viewed the New Black Panther case as a poison pill left behind as a sort of test by the outgoing regime: “It was almost like, ‘We dare you to do something with this.’ ” He said he decided to back the career staff members who wanted to drop the charges....

Conservative media outrage ensued. The United States Commission on Civil Rights, then still overwhelmingly conservative, conducted its own investigation and declared, “There is considerable evidence of a culture of hostility to the race-neutral enforcement of the law.” Its star witnesses were Coates and Adams, who stepped forward on Fox News as a “whistle blower.” Later a Department of Justice inspector general’s report said the New Black Panther Party decision was handled properly. But all of that was lost in the conservative media coverage. The reports mixed with others about how several members of the community organizing group Acorn -- which Obama helped to sue Illinois to implement the motor-voter law in the 1990s -- were indicted on a charge of filing false voter registrations on behalf of nonexistent voters, in order to pad their work hours. The story line, combined with that of the New Black Panther Party, painted a picture in the conservative news media of a president who owed his election to nefarious black vote fraudsters.

Rutenberg returned to North Carolina under the histrionic subhead, "This is our Selma," where recent legislation that rolled back the state's early voting period is now being challenged in court. While aprovingly quoting protesters melodramatically likening the events to the civil rights struggle in Selma, Ala., Rutenberg doesn't mention how even the rollback of early voting in North Carolina (which only began in 2000 anyway) still means citizens of that state have greater opportunity to vote than 16 other states, which don't have early voting at all. Hardly a new Jim Crow.

State Senator Josh Stein was sitting in his kitchen in Raleigh when the email with the new legislation came through. “My jaw hit the table,” he recalled. He quickly understood what Apadoca had meant. The bill had grown to 57 pages from 14, with 48 additional sections that cut the state’s early-voting period nearly in half, taking away one of the two Sundays when black churches run highly effective “souls to the polls” voting drives. It ended same-day registration and invalidated student IDs for voting. In its one act designed to improve voter access, the bill made it easier to vote by absentee ballot. None of this could have been approved under Section 5. The email indicated that the Rules Committee would vote the following morning.

The new bill had many authors, literal and spiritual, among the generations of civil rights antagonists...

As a street protest of the legislation unfolded, Rutenberg suggested that North Carolina's voting laws were merely a more "sophisticated" version of Jim Crow:

They most likely would have found more to agree with in an observation Henry Frye made to me, sitting on his porch two days before the trial started. “It’s not quite what it was a long time ago,” he said. Pondering for a minute, he laughed and added, “It’s more sophisticated now.”