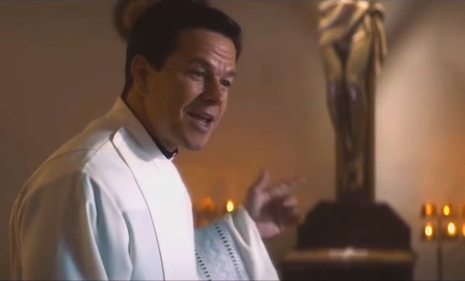 Hollywood’s biggest stars use every pulpit possible to send a message to the masses.

One topic rarely comes up during these moments, though, even if it impacts virtually every star in the Hollywood galaxy.

Some celebrities do address the issue, either directly or indirectly. Think Bryan Cranston, Ricky Gervais and Bill Maher.

Members of the unofficial A-list, however, stay mum on the subject. Some, like Scarlett Johansson, have been directly impacted by the toxic trend but quickly apologized rather than fight back.

The rapper turned movie superstar is on the promotional circuit for Father Stu. The fact-based drama casts him as the title character, a ne’er do well who turns his life around by embracing Christ.

The film co-stars Mel Gibson, an actor whose off-screen behavior crushed his career for a spell. Gibson’s talent, and willingness to atone for his actions, allowed him back into show business.

Wahlberg shared his views on forgiveness, and Cancel Culture, during a frank interview with Faithwire.

“This movie has a very clear message that we are not going to give up on people,” he said. “We are not going to turn our backs on people because of mistakes that they’ve made. We are going to tell people and encourage people that nobody is beyond redemption and that we support you, we love you, we accept you for who you are.”

“You cannot give up on people,” the A-lister continued. “And people are so quick to turn their backs on people. And negativity as a whole has just been amplified in a way that it’s really hard to remind people of the importance of loving and supporting people. People can do incredible things.”

Wahlberg knows a thing or two of how Cancel Culture works. As a teenager, Wahlberg physically attacked other teens and pelted them with racial slurs. He spent a short amount of time in jail and, by all accounts, straightened his life out from there.
Right on Hollywood
Subscribe today!

He’s now an Oscar-nominated actor who bounces from popcorn films (the Transformers franchise) to awards-worthy dramas (The Fighter, Boogie Nights).

Yet the woke mob tried to cancel him after he sent out a benign plea for peace following the death of George Floyd in 2020.

That may explain why he’s speaking out now with such force. Then again, it could directly tie into his faith. His spirituality drove him to make Father Stu, and he even invested some of his cash into the film.

That’s breaking Hollywood’s golden rule…never invest in your own movies.

A-list stars may not move the needle on Climate Change, the upcoming mid-terms or other matters they preach about from their pulpits. If enough of Hollywood’s elite speak out forcefully against Cancel Culture, though, it could make a difference.