It’s been a bad few weeks for Cancel Culture.

Yes, a man who donated a cool million to a children’s hospital got “cancelled” for Tweets he sent as a teen. And Saturday Night Live quickly fired a new cast member after his racist comments not-so-magically surfaced.

“Cancel culture is horrendous,” he said. “For you to pinpoint something like that, you want to crush me, you want to cancel me, you want to ruin me. And it’s really f***ed up that we live in this era where you cannot make mistakes. Because I know that growing up, that’s how I learned. I learned from mistakes.”

So did the director behind the number one movie in America – Todd Phillips of Joker fame. Here’s what he told Vanity Fair about the impact it’s having on modern movie comedies.

“Go try to be funny nowadays with this woke culture,” he says. “There were articles written about why comedies don’t work anymore—I’ll tell you why, because all the f***ing funny guys are like, ‘F*** this s***, because I don’t want to offend you.’ It’s hard to argue with 30 million people on Twitter. You just can’t do it, right? So you just go, ‘I’m out.’ I’m out, and you know what? With all my comedies—I think that what comedies in general all have in common—is they’re irreverent. So I go, ‘How do I do something irreverent, but f*** comedy? Oh I know, let’s take the comic book movie universe and turn it on its head with this.’ And so that’s really where that came from.”

You’d think other comedians would be lining up behind Chappelle, Burr, Maniscalco and now Phillips, right?

In fact, three prominent stars are going out of their way to defend Cancel Culture.

Director Taika Waititi, best known for his comedic films like What We Do in the Shadows and Thor: Ragnarok, jumped Phillips on social media. 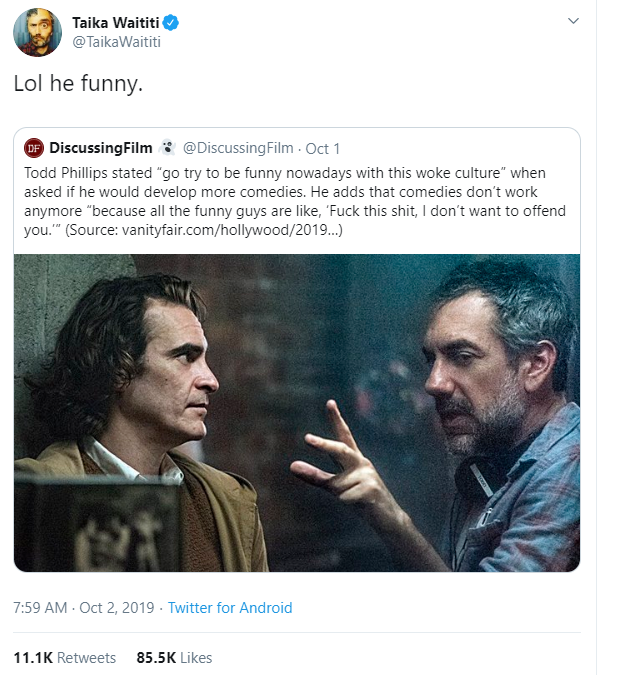 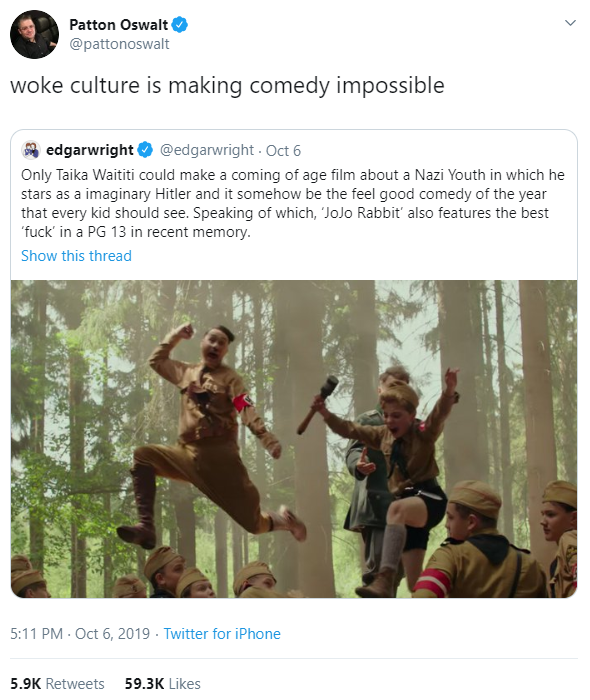 The latest comic mind to defend what many comics consider indefensible? Joker co-star and podcast titan Marc Maron. The mind behind the WTF with Marc Maron came out in defense of Cancel Culture. 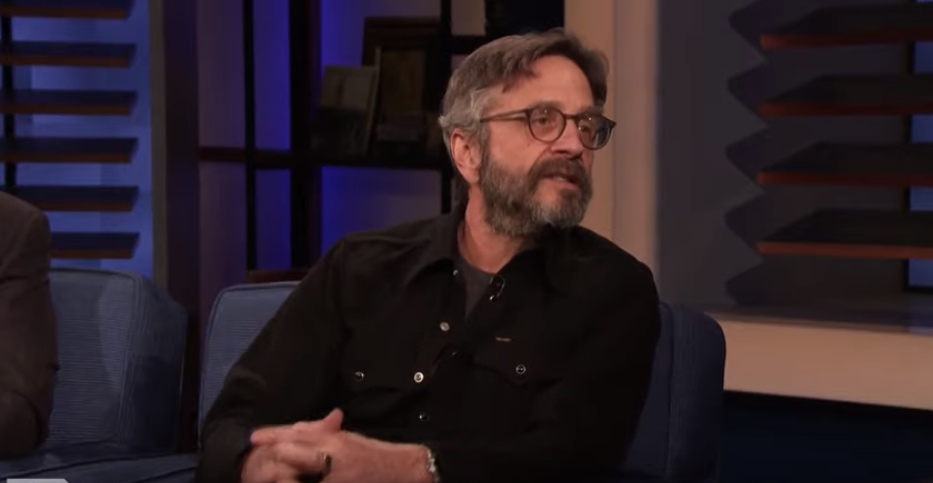 “There’s plenty of people being funny right now. Not only being funny but being really f***ing funny. There are still lines to be rode. If you like to ride a line, you can still ride a line. If you want to take chances, you can still take chances. Really, the only thing that’s off the table, culturally, at this juncture – and not even entirely – is shamelessly punching down for the sheer joy of hurting people. For the sheer excitement and laughter that some people get from causing people pain, from making people uncomfortable, from making people feel excluded. Y’know, that excitement.”

Did we miss the WTF episode where Maron, who has a celebrated role on the Netflix series GLOW, defended Trump’s family members from cruel humor? Or how Saturday Night Live called Trump voters racist without evidence?

Picking on “flyover country” citizens is the ultimate “punching down,” but Maron and his far-left chums never rally to their side. It’s almost as if the “punching down” template is a fraud.

“Bottom line is no one is saying you can’t say things or do things. It’s just that it’s going to be received a certain way by certain people and you’re gonna have to shoulder that. And if you’re isolated or marginalized or pushed into a corner because of your point of view or what you have to say, yet you still have a crew of people that enjoy it, there you go! Those are your people. Enjoy your people.”

Tell that to fellow comic Kevin Hart, who lost a gig for saying homophobic jokes many years ago (while two-time host Jimmy Kimmel dressed in blackface sans consequences).

A few comics have changed course on Cancel Culture in recent weeks. Both Sarah Silverman and Jim Gaffigan, hard-left and center left, respectively, are now critical of how wokeness influences their business.

Will Maron, Oswalt or Waititi have a similar change of heart? Perhaps only if Cancel Culture comes knocking on their doors next.