In fact, the former Saturday Night Live star would rather avoid political comedy entirely. It’s too ugly, too divisive. Fey may have ginned up headlines by impersonating the 2008 vice presidential candidate, but she’s rather make Netflix content these days.

There’s another reason she’s not getting her hands dirty in the political muck, though. She isn’t sure it does much of anything when it comes to the voting booth. 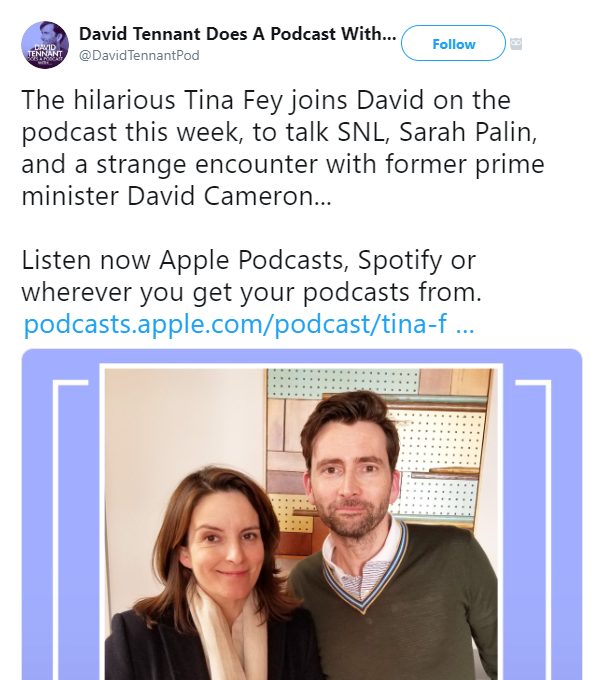 She and erstwhile Dr. Who David Tennant talked about what responsibility, if any, comedians have when it comes to political power recently. She noted all the barbs in the world won’t do much good.

“I don’t think that shows can really sway people,” Fey said. “I think you can shine a light… You can help them articulate something they’re already feeling about a given person.”

That comment inspired plenty of online conversations. It’s a potent chat to have, of course. That’s especially true since the vast majority of political comedy literally attempts to change hearts and minds.

Just watch any episode of The Late Show with Stephen Colbert over the past two years. Or grit your teeth and watch a recent SNL cold open.

Fey sang an entirely different tune just a few years ago, courtesy of her long-running 30 Rock. The NBC comedy, co-starring Alec Baldwin as an unctuous TV executive, frequently explored political content. Fey co-created the program and had a heavy hand in its writing.

“The times have changed, urban values have won and basically America is never going back again. [The Obama years] are the new normal,” Davis says of the show’s theme. Liz finally gives in, though, aggressively pandering to the Red States.

“They end the episode with Jenna [Jane Krakowski] doing a song on a set [bursting with American flags] … it’s all southern twangs and rockets and guns and homophobia,” she says. “It was that moment when I was like, “Holy bleep. I think I just figured out exactly when we got Trump!”

During the 2012 presidential campaign things got even more political on 30 Rock, Davis says. A major story arc finds Liz attempting to silence any content that could prove helpful to the Romney/Ryan ticket.

We can’t do a show that makes people like Romney, she tells her staffers.

“So every episode so far there is some mention of using their show to influence voters, mostly in the respect of making sure no one is tempted to like or promote Romney. I’m not even exaggerating,” she says.

Remember, this all hit NBC during the 2012 presidential campaign.

At the time, Fey’s 30 Rock clearly thought TV fare could sway the electorate.

“This is the final season, and it’s all about how television can influence voters because most voters outside of the urban paradise of New York City are too dumb to understand how to vote properly and are such moronic hicks that anything a celebrity tells them they’ll believe,” she says.

“The last season his family comes to visit, and we’re treated to shockingly elitist picture of how the Tina Fey’s of the world view flyover America,” Davis says. “It’s extremely clear watching this final season that Fey knew exactly the influence television programming could have on electoral politics and polling, and she was very deliberate about using her platform to stump for Obama with that in mind. It’s not subtle or hidden. It’s not something you have to ‘dig out’ of the plot. It is blatant and unapologetic.”

“It’s quite amusing and satisfying to hear Tina Fey self-righteously wax poetic about how half the country is now and forever irrelevant, knowing that in just a few short years she and her ilk will be shaking their fists at the sky and wondering how they all could have gotten it so very, very wrong,” Davis says.