Nimesh Patel learned the hard way how intolerant some college students are in our woke age. And, by comparison, how even the Reddest of Red State types can withstand a shot at their preferred politician.

What happened during his set made headlines nationwide, and deservedly so.

The comedian gave the back story behind the moment on “The Joe Rogan Experience.” Patel described the scene to Rogan, including the joke that sparked the so-called outrage. To paraphrase, he told the crowd no one would choose to be both black and gay given the discrimination each group faces. On the Woke Joke scale that’s about an eight out of 10.

That’s not how select audience members heard it. They reacted in horror, saying the joke wasn’t appropriate for the venue.

Several members of the committee that hired Patel took to the stage, he recalled, eager to end his routine as soon as possible. The committee members initially lied, saying they no longer had the tech person responsible for overseeing the performance.

Patel told Rogan the microphone still worked, so that clearly wasn’t the case.

He eventually learned which joke offended a small number of students. He objected, and even told the origin of the joke and the black gay gentleman who inspired it. His mic got cut all the same.

That was enough, though.

“We gotta escort you out,” they told him behind the scenes, when simply being off stage wasn’t sufficient.

Patel shared his rage about his shocking dismissal for the podcast’s listeners. He also described how he had performed edgier sets at other colleges without incident.

“College wise …in the past year I did Texas, I did a school in Alaska, did a school in Ohio …I’ve said much more offensive sh**, like anti-Trump sh**, in the reddest of states. And it’s all been fine. I’ve never been kicked off stage before … to me, this Columbia incident, even the students there, seem the exception rather than the rule, that everyone’s a soft person.”

For what it’s worth, Patel previously told the Columbia crowd Vice President Mike Pence is probably gay, explaining no one could hate gay people so much unless it reflected an inner conflict.

That joke apparently didn’t outrage anyone.

Both Patel and Rogan agreed it’s a small group of people with the loudest megaphone in situations like this. And, as is often the case, they weaponize the heckler’s veto.

The students who gave Patel the hook aren’t alone.

Or, consider this op-ed generated by a Columbia University student. She dubbed his routine “blatantly anti-black” before defending his removal. 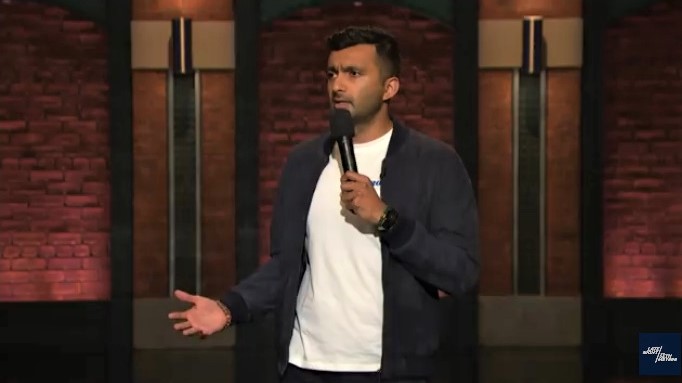 Patel’s mic wasn’t just cut off because he told offensive jokes to a sensitive, snowflake audience, which is the narrative that I see being talked about. He was booted off the stage because he sucked the energy out of an entire auditorium. When he told the gay Black joke, even he noted the tension. His routine was the antithesis of what cultureSHOCK stood for. He stepped into an uplifting atmosphere and soiled it, which is the opposite of what he was meant to do as a hired entertainer performing at someone else’s event.

The comedian sounded shocked by the chain of events, at least based on his Rogan chat. That’s understandable, but only to a point. Where has he been for the past five years?

Hasn’t he witnessed comic after comic after comic get pulled over by the PC Police? Did he rage when Roseanne Barr, a pioneer for female comics, lost her career over one awful Tweet? What about Kevin Hart’s Oscar gig, which lasted all of two days after homophobic jokes floated to the surface after nearly a decade?

Is he only furious now because the PC Police came for him? Could he have written some “SNL” sketches during his time on the show that reflected this cultural insanity?

Patel and Rogan agreed the Columbia kerfuffle is good for Patel’s career. Now, let’s see if he uses his new clout to fight back against cultural censors.