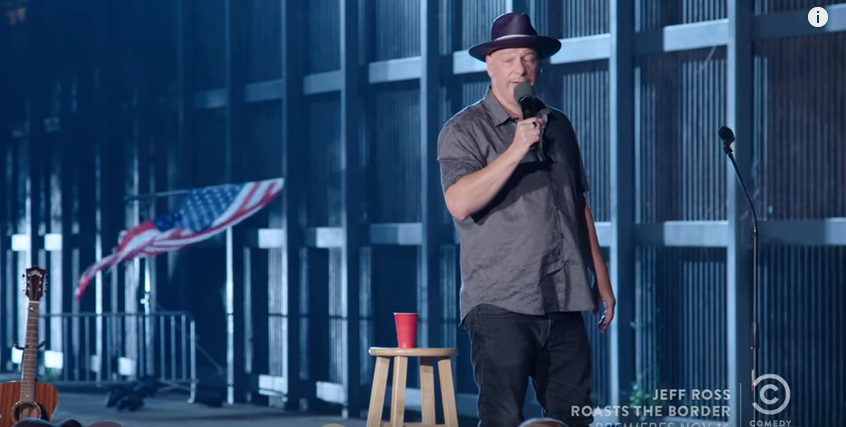 Compare these two comments made within a week of each other on Comedy Central.

“We do need to look at border security. We need to find a more dignified way for people to come to America” Ross told The Daily Show host.

On the Nov. 16 premiere of Jeff Ross Roasts the Border: Live from Brownsville, Texas, the veteran comic reverses course, 180 style.

He also made some lofty promises about the special in a recent chat with L.A. Weekly.

“We made our case that we’re not going to mock or humiliate anybody on any side of the issue, and we’re going to try to do something objective but also deeper than most news reports that you see.”

It’s true that the special, debuting at 10 p.m. EST Nov. 16 on Comedy Central, doesn’t denigrate those who support a border wall. The notion that the hour is “objective?

The special is a hopelessly lopsided look at the immigration debate that manages to:

— Compare President Trump to Hitler.
— Repeat the tired saw, ‘We’re a nation of immigrants” sans context.
— Showcase Ross’ loose grasp of the issue in play.
— Tug at our heart strings over and again while rarely letting the other side have a say.

The special features a smattering of statistics, like ICE arrests are up 38 percent, without other context. Does Ross know deportations under President Donald Trump are much less than the average rate during the Obama years?

That was then, we’re told by Ross.

“Suddenly, America is a snobby club with a douchey doorman,” Ross cracks. He does that a lot, poking fun at this or that in a mildly outrageous way. It’s edgy comedy cocooned in bubble wrap. He’s the Roastmaster General, so he’s cut more slack than most. Still, the entire special is engulfed in progressive bromides, so it’s hard to imagine Social Justice Warriors lighting their cyber pitchforks.

The special lets the people speak their mind – assuming they agree with Ross. The vast majority of the commentary is pro-illegal immigration. We hear protesters chant, “No ban, no wall” even though the issues behind both are wildly complex.

Random facts are thrown our way, like how El Salvador has the highest murder rate in the country.

That’s awful. Does that automatically mean we should allow every single person from El Salvador into America? What about other countries with similar conditions? And why is there no guilt trip placed on nations that enforce their own border policies … like Mexico?

Ross isn’t ready for that kind of debate. He’d rather yuk it up with his grab bag of hazy facts and emotional heart tugs.

“This nation was built by immigrants. It still is,” he says, a theme he’ll revisit often which nicely blurs the line between legal and illegal immigration. That’s par for the course for those who talk about immigration dishonestly.

Ross is just warming up his plethora of straw men.

“With some people calling for a Muslim ban, even our freedom of religion is at risk,” he warns. Not even close, of course. But as scare tactics go it’s a good one. Plenty of Muslims are free to come to America and practice their religion as they wish. And no legal Muslim American has to worry about jackbooted thugs breaking down the doors of their mosques.

At one point Ross holds up a child’s shoe left along the border.

“I don’t think that’s a drug dealer or murderer coming over here,” he says.

He’s right. He also knows that’s a distraction, an attempt to sway audiences through naked emotion.

So how does Ross know America can handle unfettered immigration? It’s simple!

“Look how big this country is,” he says.

The border roast occasionally lets Trump fans speak. They’re eloquent and calm, and Ross has no solid answers to their questions. Here’s one supporter sharing why he’s against an open border.

Trump fan: We need to tend to our own before we tend to everyone else.

Ross: (referring to two immigrants who just arrived here illegally) Those two people are now Americans. They’re just gonna be part of our poor that we have to take care of.

Wait … who pays for that? Ross doesn’t say.

We hear other emotional stories about illegals getting picked up, arrested and, in some cases, thrown out of the country. One family man wonders when, or if, he’ll see his family again.

It’s tragic, and in a way our political class is to blame. We failed to enforce immigration laws for years, silently inviting others to come across our border. Then the enforcement kicks in later, at a random intervals, and the results are often heart breaking.

Between lectures Ross spits out lazy one-liners. To a heavyset Mexican – “What are you celebrating, Cinco De Mayonaisse?”

“I’m all about bringing people together,” he says. Later, he makes a joke connecting President Trump to Mein Kampf.

Some sequences reveal plenty, although not in a way Ross would expect. We meet a couple whose backyard is surrounded by a wall separating the U.S. and Mexico. When they tell Ross people cross the wall every other day, often with drugs, the comedian says nothing. Could the confession change his mind on unfettered immigration? It doesn’t appear to leave a mark.

Besides, after taping this gig he’ll be back safe at home. Let these Americans worry about the drug flow.

The stand-up part of the special takes place in Brownsville, Texas. It’s allegedly ground zero in the immigration debate. It’s also a town that’s 91 percent Latino. Do you think maybe Comedy Central picked that town for a reason?

Ross brings up Syrian refugees, another emotional topic in the immigration debate. He says those against admitting them to the U.S. say the country isn’t big enough. What about the reasonable response that we cannot vet refugees from war-torn countries and a small amount may pose a genuine safety risk?

Ross claims letting all the illegals currently stay in the U.S. would boost our economy by more than a trillion dollars? Really? What’s the source? More importantly, what about the costs from that process – like tending to the poor among them who would instantly gain access to government programs.

Another revealing moment? We meet a man who lived in the U.S. for 19 years illegally before he suddenly got the boot. It’s another sad story, no question. The interview ends with him shouting, “Viva Mexico.”

Another exchange with a Trump fan shows how slippery Ross is with his facts. The man says there’s a “right way to get into America. You file your papers you wait in line like everyone else.”

Solid. Reasonable. Nothing hateful about it.

Ross doesn’t have an answer for that, though. Later, the same person is asked by Ross about the Trump wall and its huge price tag.

“What’s the price of security?” the man asks.

That’s not an answer. It’s an emotion.

Ross disingenuously suggests fining companies that hire illegals as a way to stem the tide of illegal immigration. That would allow people to self deport, he suggests. The Trump fan quickly tells him those laws are already on the books. No one enforces them.

Jeff Ross Roasts the Border illustrates the perils of elevating comedians to pundits. Say what you will about Sean Hannity or Joy Reid. They more often than not have done the basic homework needed to opine on a subject.

Ross? He scribbled a few ethnic jokes down while his producers gathered as many hard-luck cases as they could find.

The comedian wraps the show will this pledge.

“This really is the greatest country on earth, and I think it’s important we do everything we can to protect it,” he says.

“But not just our borders. Our laws. Our health. Our humanity. We have to protect all these things cuz at the end of the day we’re just people,” he says.

He then breaks into a cover of “This Land Is Your Land,” complete with the following lyrics.